As a former HP engineer working with the then newly formed HP printer division, it warms my heart to hear that

Credit where credit is due.

This also taught me about getting the correct tool for the job.

When I bought my first laser printer, I looked at the HP laserjet and an Epson “just-as-good” that included the Centronix printer port as standard equipment. At about 1/3 to 1/2 the price, I considered it to be a no-brainer.

Turns out that getting supplies was a pain and the durability left a lot to be desired.

Today that printer is nowhere to be found, (unless it’s in a museum somewhere), but it’s an acknowledged fact that HP Laserjet 4’s still exist, still work, are still supported,[1] and you can still find both repair parts and supplies without resorting to voodoo or The Black Arts.

Another thing:
The HP Laserjet-4 is the “standard reference implementation” for CUPS in Linux.

Unfortunately, later generations of HP printers, (and the highly monopolistic nature of HP’s marketing), have not lived up to that standard of excellence.

So, if the TurtleBot is the “HP Laserjet-4” of the ROS community, by all means go get one!

Though have pity on us poor souls who only have a measley GoPiGo, and try to continue at least some of that research.

I mentioned this in another thread, but it may bear repeating here:

When drilling hard plastics like Polycarbonate (Lexan-like), plastics, you need to:

Actually this is good advice for drilling any kind of plastic, except (maybe) for soft and thin polystyrene plastics. Then the only change is to use a sharp metal bit with a stiff backing board.

Cutting hard plastics is the same:
Use a SHARP, FINE-TOOTHED blade on a manual jigsaw to make the cuts and use a backer-board to support the plastic.

Hope this helps someone else not break chassis parts.

Agree with all (except I don’t drill quite that slowly). Also helps to put a piece of painters tape on top - easy to mark, keeps the tip from slipping initially, and helps keep the top edge cleaner. Do not try to mark a divot to start the hole - that is a good way to crack the plastic.

When drilling hard plastics like Polycarbonate (Lexan-like), plastics, you need to:

Buy a 3D-printer and learn to print slots so the LIDAR can be rotated to align exactly 0 degrees?

I used Keith’s tape method, but without a bench, clamps, or a drill press, using a hand-held drill I was not able to achieve perfectly aligned holes with no cracks. Luckily, the crack did not damage the plate’s integrity.

I probably will have to factor in the slight, off-axis pointing angle into the URDF “joint_ydlidar” rpy=“0 0 0.0261799” (first guess is 1.5 degrees) to get the scanned wall angles to match reality. It is really hard to measure small angles in three dimensions.

I used Keith’s tape method, but without a bench, clamps, or a drill press, using a hand-held drill I was not able to achieve perfectly aligned holes with no cracks. Luckily, the crack did not damage the plate’s integrity.

I use a hand-held drill with a small wood-boring bit running around 1rps and haven’t cracked the plastic.

The key is to drill slowly and don’t apply too much force.

If you need a relatively large hole and don’t have a set of wood boring bits, drill a small one (1mm) and then go up 1 or 2 mm at a time, carefully up sizing the hole. The smaller the change, the slower the drill, the less chance of cracking the plastic.

Speed is your enemy!

Do not try to mark a divot to start the hole - that is a good way to crack the plastic.

You can take a 1mm metal bit and twirl it between your fingers to make a pilot hole or dent if you wish.

I put it in place, put a finger from my left hand on top of the drill bit to hold it steady and use two fingers from my right hand to spin it.

Alternately you can use, (carefully!), a pin-vise to hold the bit.

No idea. The bits had two stages, and I had to drill eight 0.125 inch and two 0.250 inch holes. One of the smaller assaults tried to ruin my day, but stopped just short of being a problem. 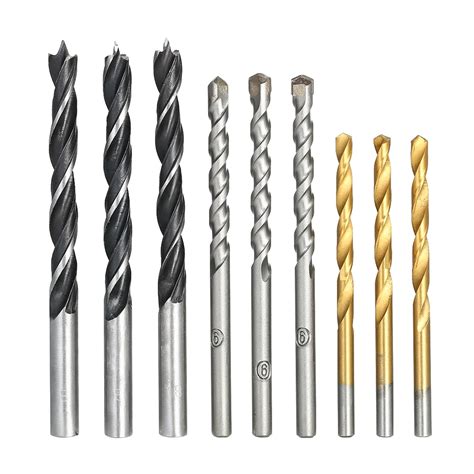 Note that these all are large bits.

Note that the wood bits have:

This is what makes wood drilling bits so wonderful for drilling hard plastics, because the plastic acts like a very hard hardwood.

Because of this, you drill directly to the desired size. (i.e. If you need a 6mm hole, you don’t drill a smaller hole first - you drill the 6mm hole directly using the correct size wood bit.)

For very small holes, (less than 3mm or 0.12"), use an appropriately sized metal bit and be very careful. (The smallest wood bit I can find is 3mm.)

If you can get metric sizes they’re very convenient since there’s none of the “adding and converting fractions” B.S. Also most items are even metric sizes anyway, including the GoPiGo.

I cannot over emphasize how important it is to TAKE IT SLOWLY, not press too hard, and clear the hole often.

I probably will have to factor in the slight, off-axis pointing angle into the URDF

You can take a 1mm metal bit and twirl it between your fingers to make a pilot hole or dent if you wish.

That should also work - I was thinking of one of those punches, which would be a no-no.

I actually don’t remember what bit I used when I mounted my lidar. But I am sure I only did it in one stage. Maybe it was a wood bit as @jimrh recommends.