When No One Hears A Robot Cry

Every robot knows it should sacrifice its own comfort to that of its owners, no? 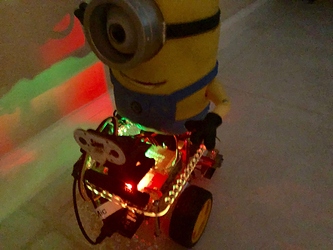 At 4:30am this morning Carl was having a crisis:

So Carl sat staring mournfully at his dock for ten more minutes, then quietly put himself into a deep sleep.

If I remember rightly, this has happened before - right?

Likewise, if I remember rightly, Carl knows how to get on his dock.

So, the Musical Question becomes:

So, if he does get jolted like this, why doesn’t he simply undock, move a few feet away, turn around, find his dock, and re-dock himself?

Or is there something I’m forgetting about how Carl works?

Sort of and sort of not - let me explain the reality of Carl’s “playtime”.

I have not programmed the most important step that would unleash Carl for random playtime:

This last task requires using the camera and OpenCV to figure out how to drive to be lined up perpendicular to the dock aligned with the center of the dock.

I supposedly have the OpenCV knowledge, but have not tackled applying that knowledge to become a reality.

So Carl’s reality right now is "When you get off the dock, don’t wander away from that exact spot or you will not know how to get back on the dock"

This asks two other questions: 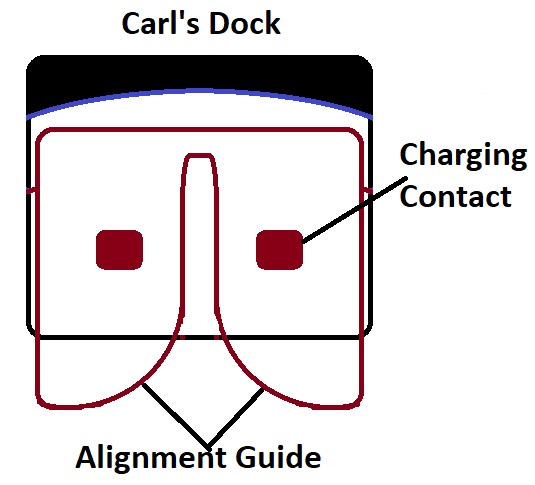 Or something similar so that the EXACT alignment of Carl in front, prior to docking, is not so critical anymore. A piece of inexpensive plexiglass and a jigsaw should be more than adequate. 1/8’ or 1/16 wood (like plywood or cabinet back marlite), would work too.

It might need to be a little longer front-to-back, but the idea is that it would protect Carl from the accidental jiggle, (he could just “go backwards” to re-seat himself), and if he gets “close enough” to the “exact spot” he can dock by himself without needing nuclear precision.

Or, simplest of all:  In the case of critical issues, allow him to speak during quiet hours?

You are a better engineer than me. I wish I was good with building stuff, or knew how to 3-D print stuff.

Carl does have a make-shift guide of the best of my abilities: 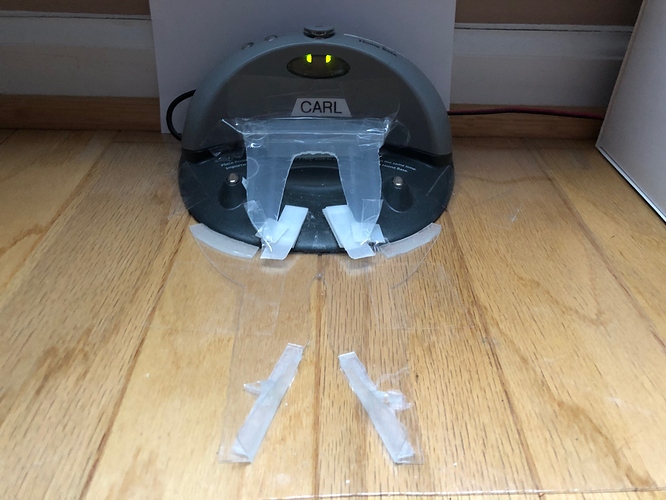 I have some foam board; I can try various shapes and guide lengths before tackling a sheet of acrylic with my hand jigsaw. (I’m just not good with tools, period.)

A software solution has more appeal but I just haven’t had the will to dig into it. Perhaps trying again with the hardware assist will work well enough.

I have some foam board; I can try various shapes and guide lengths before tackling a sheet of acrylic with my hand jigsaw.

With respect to this particular problem, (IMHO), a “software” solution would be both time-consuming and potentially expensive. An optical system invites the question of “what happens if the light through the window is just so?”  Or, “What if a future replacement lamp in that room has a different color-temperature?”

A “hardware” solution for a problem like this is immune to all these issues, but presents issues of its own - like “What is the ideal spacing with respect to both the roller and Carl’s wheels.” or “Is it long enough? Too long?”

Since you have foam-board, have you considered cutting a (relatively) small piece, (a few inches front to back), that fits around the front of Carl’s dock, mashed down toward the front to make a ramp that is easier to climb than the relatively high lip that is at the front of the charger now? With a bit of a ramp-up, maybe the rest isn’t so difficult?

Thinking about it, I would try a ramp to overcome the lip at the front of his dock before I’d re-manufacture the guide.

Maybe it’s me, but this doesn’t sound nearly as difficult as some of the really gnarly problems you’ve faced in the past.

No. A terrible idea.

Do you remember an old television show called “Dobie Gillis” (1959-63). There was a rather simple character “Maynard G. Krebs” that would yell “Work?” and exit the scene quickly at the mere suggestion. (Dobie’s lazy and somewhat goofy best friend. Maynard was a would-be beatnik who shunned romance, authority figures, and work.) Maynard G. Krebs knew that once you get started on something, the work will never end.

So I built an extended docking guide from foam board. Modified juicer for the longer backing distance and told juicer to perform five test dockings.

Major success. Carl backed over the lip just fine, and seemed to have a much larger error acceptance.

So then I placed Carl in the center of the room, and told him to “find your way home.”

He did a 360, threw up his arms, and told me he was taking the rest of the day off.
(findDock.py uses OpenCV to

When I last left the program months ago, it appeared to be working quite well. Some sort of bit-rot must have occurred.

Now I remember why I didn’t finish the docking code - “Work? See Ya!”

That was before my time.

When I last left the program months ago, it appeared to be working quite well. Some sort of bit-rot must have occurred

Or, a dependency or some corollary code was modified somehow somewhere else that broke this code.

I don’t think you should throw in the towel so quickly, (IMHO).

I’ve noticed a particular cycle of programming effort with that project:

The result is that I abandon the project for a while, and - ultimately - become frustrated that I’m not accomplishing what I want.

Reading The Art of Unix Programming by Eric Steven has been instructive.

Apparently what I need to do is step back, look at what I’ve done, and - very possibly - refactor the entire code tree, simplifying it into something that doesn’t make so many assumptions about what the input device is.

Likewise, in Carl’s case, perhaps instead of trying to teach him new skills, it’s time to step back, examine the existing code and try to simplify and refactor it into smaller, less complex modules that have less a tendency to interact and break each other?

1 Like
The Art of Unix Programming - design maxims for clean and efficient code
cyclicalobsessive December 3, 2020, 7:11pm #10

in Carl’s case, perhaps instead of trying to teach him new skills, it’s time to step back, examine the existing code and try to simplify and refactor it into smaller, less complex modules that have less a tendency to interact and break each other?

Exactly the first step - break it up and keep what works. Then take a nap.

Or maybe I’ll start with the nap and dream a solution to the problem .

Did this ever get resolved?

so close, but on indefinite hold

maybe I’ll start with the nap