A New Bot Was Spotted

Please introduce us to your bot

(And what’s that behind his ears?)

Regards from “Carl” (who is busy learning to be a noise threshold sound recorder, and noisy conversation interjector.)

Those little green antennas make it look like some sort of a martian - that’s pretty cool!

Here is a picture of the “newly spotted” GoPiGo. 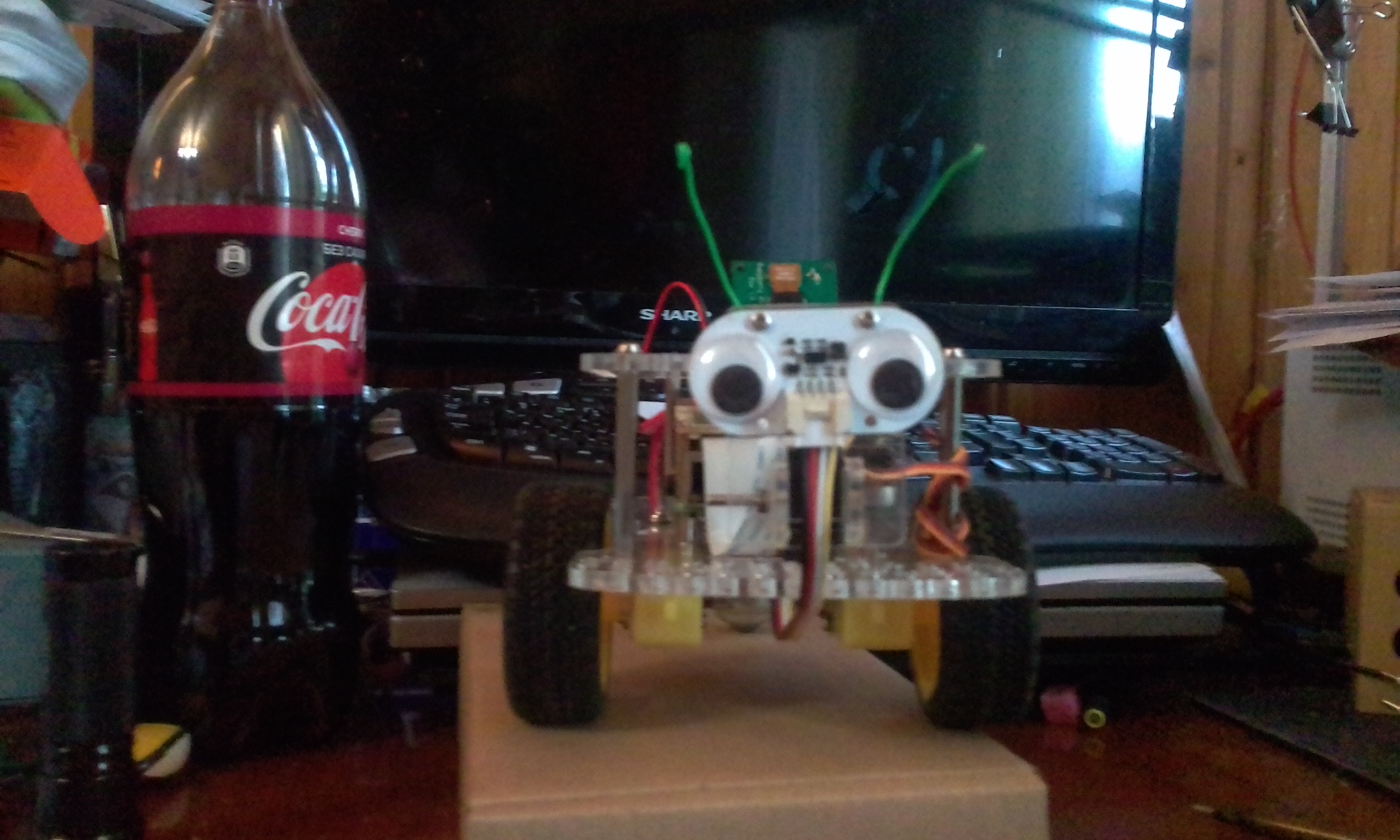 Though I was, (and still am), impressed with the spec’s on this beastie, I have to confess what really sold me on this kit was the googly eyes! What an utterly silly and whimsical thing - but it makes the difference between spending a few hundred on your bots as opposed to someone else’s.

No, the robot doesn’t have a name. At least not yet.

The googly eyes and the cable “schnozz” gives it a somewhat insect-line appearance, so. . . I grabbed a couple of pieces of green wire out of some network cable I had laying around and attached them to the back of the sensor board, under the small mounting nuts in the back.

The green thing visible between the antennae is an early version (Pi-2B vintage) camera module. What I wanted to do was attach it either below or above the distance sensor so that the 'bot could “see” in the direction the “head” was turned. Unfortunately, I am still debugging some technical issues so I can’t report on the effectiveness of the camera.

I do not have the plethora of degrees the OP has, having “come up through the ranks”. When people ask me what college I attended, I tell 'em “The School of Hard Knocks” (Universitas Qvaerenda) - who’s motto is Comitatur Turba Multa, Sed Brevi Graduati - “Many attend but few graduate”.

Now that I have retired, I can (finally!) indulge my desire to do experiments in robotics and hopefully interest my granddaughters in technology at the same time.

My first “true” electronic (programmable) robots are the GoPiGo and a micro:bot from SparkFun. (I think the micro:bit totally “out cutes” the Pi by miles, though the Pi out performs the 'bit by light years.)

I am still fighting the learning curve for both robots - and complaining about it mightily since I believe a device that you can (supposedly) hand to a bunch of 8-year-olds and teach them programming, shouldn’t require a degree in CS to figure out. One real advantage of these fora is the responsiveness and the willingness to discuss - perhaps not agree, but discuss at the very least - whatever issues or angst you are facing. And you end up talking to people within the company - engineers and technical types - that can listen to, evaluate, and even implement suggestions on-the-spot.

I am thrilled to be a part of this community and I am looking forward to sharing The Continuing Adventures of my GoPiGo - Coming To A Theater Near You!

I just love those little antennae.
You do know we also have a micro:bit robot, right? Check out http://gigglebot.io as it also has googly eyes, and plenty of neopixels to play with

I discovered that too late - after I was already in Russia. It’s a cute 'bot that I surely would have purchased. Pity that most of this stuff is probably off limits to Russia. There’s a bunch of Sparkfun I2c proto boards I’d love to get too.

Any possibility of getting the line-following sensor over here?

Looking at the schematic for the GoPiGo board, all three of Dexter’s LEDS are on the same address line. I should be able to address any of the three, not just the eyes, right?

Regarding the GPG3 LEDs, you can control both eye LEDs as well as the antenna LED. DexterOS uses the antenna LED to indicate the current WiFi condition, but in Raspbian For Robots that LED is fully available for the user to control. Including the two red LEDs in the front corners of the GPG3, there are a total of five user-controllable LEDs on the GPG3.