Camera Calibration (or not...)

This weekend I wanted to see if I could calibrate the camera for ROS. I’ve done this before on a different robot in the past (during a course I took). Ultimately I was not successful. But figured I’d document a few things here for the sake of others.

So no joy there. But…

I don’t know yet if the generic calibration files are good enough. I want to use the camera to recognize AprilTags. Will update this thread once I’ve tried.
/K

I want to use the camera to recognize AprilTags.

And why is an “April” tag any better or worse than one done in March or May?

I want to use the camera to recognize AprilTags

I’ve heard AprilTags are much better than QR codes. I was unimpressed with Carl’s results with QR codes.

Robot Carl based on Dexter Industries GoPiGo3. Contribute to slowrunner/Carl development by creating an account on GitHub. 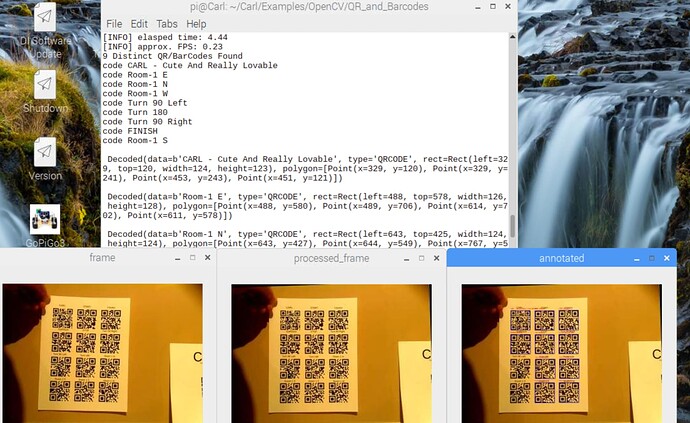 The Wiki for Robot Builders.

Don’t know if you’ve been watching what is going on with respect to the camera on raspberry pi. Ubuntu, and now PiOS Bullseye are changing how the picamera is accessed. I haven’t tried to get the raspicam node up in ROS2/Ubuntu 20.04 since they broke the Python picamera module. We’re all supposed to learn how to use the standard debian libcamera.

I’ve heard AprilTags are much better than QR codes.

For certain cases of “better” - they are simpler, so I’m sure they’re less computationally intensive for recognition.

I haven’t tried to get the raspicam node up in ROS2/Ubuntu 20.04 since they broke the Python picamera

The node is clearly working, at least somewhat - the compressed images come across fine. Not sure what library is being used by the node. There seems to be an issue with interpreting the image. Instead of 410x308 it thinks it should be 308x1230 (which is 410 x 3; so not sure if this is an issue with how the channels are interpreted???), and I’m not at all clear where the expected 399360 came from. There may be configuration settings to fix that. I was just too frustrated to work on it yesterday.

As an aside - I’m also doing an online OpenCV course - the whole need to convert back and forth between bgr and rgb is irritating in and of itself.

Don’t know if you’ve been watching what is going on with respect to the camera on raspberry pi.

now PiOS Bullseye are changing how the picamera is accessed

New story on that today: https://www.raspberrypi.com/news/bullseye-camera-system/.

There are some benefits to fixing at Bionic and ROS (1).

Be sure to keep backups before doing any updates. I have a (regretfully non-automated) suite of tests of motors, servos, encoders, distance sensors (IR and US), TTS, Speech Reco, and Camera that I run before and after updating. It makes updating even more daunting.

Carl stayed on R4R Stretch for almost a year after the R4R Buster appeared. Even some in-release updates have had to be reverted for a while to keep sound apps working due to Linux architectural decisions that the Raspberry Pi Foundation could not fight.

The once little, low-cost Raspberry Pi for education has taken its place among the processors a non-small portion of the world is counting on to work strong and consistent.