Carl Has A New NiMH Charger 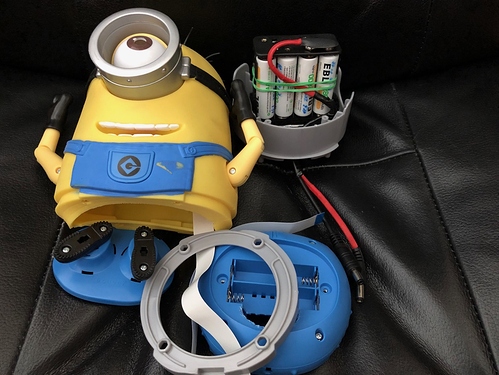 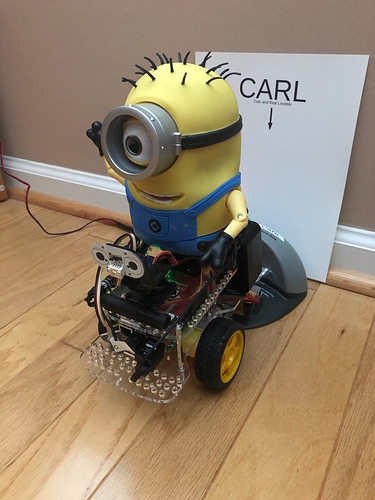 With that charger on the 2A setting, Carl did not reliably recognize the charging state, nor the transition from charging to trickle charging, so I only used the 1A setting. 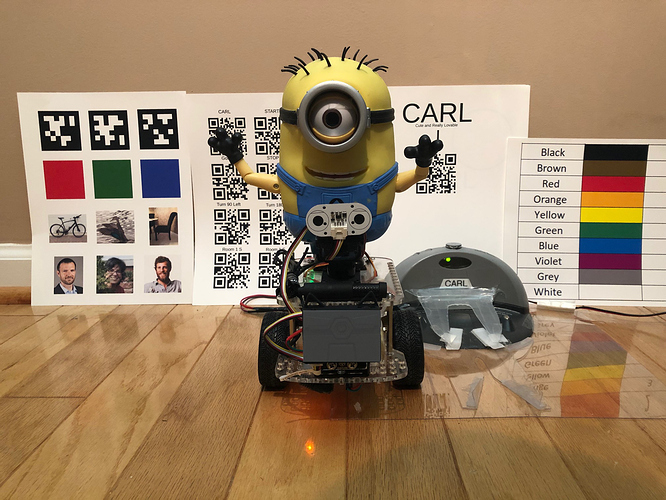 My only question/concern here is the rate-of-charge.

With the significant caveat that I am not a battery expert, (and as a consequence believe that the datasheet is the Voice of God absent better information), IMHO the general rule of thumb is that the slower the charge rate, the longer the battery’s lifetime.

Have you bothered checking the battery pack’s temperature and comparing the “charging” and “discharging” temps? That might be instructive.

Have you bothered checking the battery pack’s temperature and comparing the “charging” and “discharging” temps?

Indeed would love to add a temperature sensor to the battery pack that Carl could check that.

At this moment, Carl has been on his dock for about 50 minutes into the expected 90 minute charging, with slight temperature elevation of the batteries as “measured” with my finger (“through his skull to touch the batteries.”) 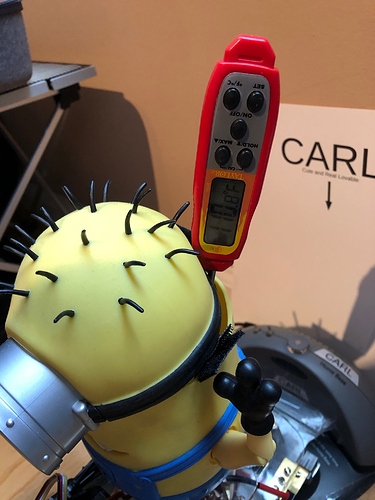 You might want to turn down the charging rate a bit. That would worry me.

battery pack’s temperature and comparing the “charging” and “discharging” temps?

It looks like the max charging temp was 130degF and discharging at 15% load was 82degF in a 76degF room.

Have you seen a NiMH spec sheet on this? I was going to look one up but got distracted looking at Texas Instruments i2c drivers, repeaters, and pull-up resistance calculations.

Totally off topic:
What is the exact problem with clock-stretching on the Pi? Where can I find authoritative information about this? I want to make sure that it’s not something that can be fixed relatively easily by modifying a component somewhere.

Have you seen a NiMH spec sheet on this?

No, but everything I read seems to say I need to go back to 0.5C based on the temps Carl is seeing at 1C.

Thanks for the heads up to look at this.

No, but everything I read seems to say I need to go back to 0.5C based on the temps Carl is seeing at 1C.

Wouldn’t it be ironic if after all the worrying you’re doing about lithium batteries, you ended up with a fire from overheated NiMH cells?

When I bought my first set of NiMH batteries over here, they came with their own “charger” which I used. Once.

The batteries after the charging cycle were too hot to hold in my fingers!

I went right out and got a second set of batteries, charger included! - that had a more intelligent charger, and were significantly more expensive. Actually, I ended up getting two of them once I determined the charger worked properly.

I ended up having to throw out the first set of batteries - they were absolutely ruined by the dumb-charger. I opened it and it was essentially a diode bridge across the 220v line, filtering, some dropping resistors, and a series-parallel connection to the batteries. No charging logic at all. Oops!

I now have two smart chargers that gently charge four cells each, with no appreciable heating. (at least as measured by my fingers) The only caveat is that it takes 12-18 hours to charge.

battery pack’s temperature and comparing the “charging” and “discharging” temps?

It looks like the max charging temp was 130degF and discharging at 15% load was 82degF in a 76degF room.

Update for 0.9A rate - max temp 92degF (33degC) at end of a 3.5 hr recharge which is possibly better for the batteries than the prior charger at the 1A 2.6 hr recharge.

Update for 0.9A rate - max temp 92degF (33degC) at end of a 3.5 hr recharge which is possibly better for the batteries than the prior charger at the 1A 2.6 hr recharge.

What happens to the temp and charge time when you drop it to a half-amp? I don’t expect Carl to tolerate an 18 hour charge cycle, but I, myself, tend to go for the lowest charge rate that will give you the required charge in a reasonable time.

Founds something that actually has some practical information:

So here you go: In general, slower is better, because it preserves the cycle life of the battery, and but for AA there’s such a thing as too slow. So here’s how to do it:

La Crosse suggests that the optimal charge rate is 200mA, and that’s what the default is for its BC series, though again, for AA, you should use 500 mA instead.

At the recommended levels, a battery will take about 4-5 hours to charge. Faster than that potentially reduces cycle life, and too much slower than that could possibly cause the charger to miss the cutoff, overcharging the battery, and reducing cycle life.

According to this, a 0.5 amp charge rate is ideal.

What happens to the temp and charge time when you drop it to a half-amp?

Another investigation to schedule…

so I may stay on the new charger at the 0.9 rate, but the extra hour of “can’t go out to play” cost is making me eager to measure the max temp for the old charger.

At least the articles, (plural), that I’ve read on charging NiMH batteries, they say a half-amp is ideal, 700 mA is pushing it, and beyond that you risk battery damage and/or reduced lifetime.

The other side of that is if the new charger is better able to detect end-of-charge and drop to a trickle charge rate properly, (enough that Carl can detect it), you might be well advised to stick with the new one.

One other thought. If either charger provides some indication of “fully charged” (an LED, or perhaps a signal being asserted), you might want to consider a third charging contact for Carl that would allow him to intercept the EOC signal and handle it appropriately.

You might be able to pull an active high and/or active low off of a LED, depending on if it’s connected open collector/open drain or open emitter/open source.
Open collector = the LED is between the positive voltage and the transistor/IC and would be pulled low to indicate end of charge.
Open emitter = the LED is connected to ground and the other end is pulled up to turn on the LED, and would be pulled high to indicate end-of-charge.

“Da’ bitch part” is the magnitude of the voltage. Unless the charger uses an Atmel IC, you might well have to buffer-down the signal to 3.3v. (or, provide an isolationg transistor and a one to five K base resistor to limit base current. If it’s a MOS device, 1k should be more than adequate.

You know how much trouble I went to just for the two contacts? No way.

Actually Carl is pretty good at detecting the charger switching from delta-v peak charging to trickle charging - I invested a month on the detection algorithm.

Carl also has a “possible false trickle charge detection” to be sure he doesn’t misinterpret the delta-v peak test period as trickle charging.

Carl “thinks” (reasons) and “thinks about thinking” (meta-reasoning). Now if I could just get him to listen better.