Carl “plays” quite happily for 7.7 hours at a time of his current NiMH batteries (8x Eneloop Pro 2500mAh AA cells) after he docks to recharge for 3.5 hours. At the moment, he is docked, charging for the 15th cycle on this battery set; Each cycle lasts about 11 hours when the charger doesn’t mess up and start trickle charging early.

Panasonic makes two levels of Eneloop NiMH cells. I chose the higher capacity, lower cycles Eneloop Pro cells to test in Carl this time. They are the first batteries to deliver their promised capacity, which is very encouraging. When these cells eventually need replacing, I’m going to try the lower capacity, higher cycles Eneloop 2000 mAH cells.

Many people have responded to my “battery posts” that I should use Li-Ion batteries. With so many reports of Li-Ion battery fires, I was hesitant to even consider investigating the idea. (I should add my wife has said Carl will have to be an “outside pet” if he gets “those fire sticks”.)

Sometimes I get excited about new experiments before doing enough research. This investigation seems to be an example of that.

I purchased four “UniversALBC 18650 3.7v 4000mAh” cells from aliexpress, which arrived 16 days later from China, marked “Fan Accessories”. (US Postal regulations seem to prohibit international shipments of Li-Ion cells not installed in equipment. Just cells is not permitted as I read the regs.)

For reference, Carl’s current NiMH 9.6v 2500mAH battery is delivering 24 wH, so these early results do not portend Li-Ion cells in Carl’s future.

Researching Li-Ion performance on the Internet confirmed that my results are exactly matching the average Chinese Li-Ion cell performance. Apparently there are some Panasonic and Samsung variety Li-Ion cells which do deliver on their promised initial capacities, (at a cost and actual cycle life similar to NiMH), but even those still come with the warning “Do not charge unattended!” The whole point of allowing Carl to run 24/7 is so that I don’t have to tend to his needs.

Test setup: Fire Resistant Bag with BC-3000 charger (outside of bag for photo): 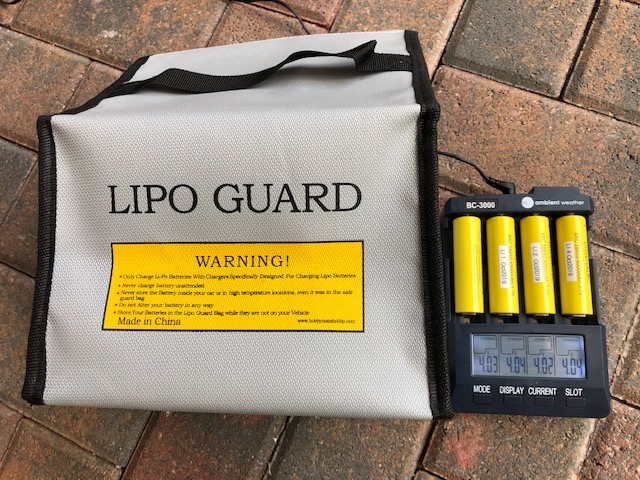 This really gives me additional pause:

On a personal note, Charlie’s waiting patiently in Russia, waiting for me to get back with some new presents for him. More on that later.

Interestingly enough, I’ve never experienced any issues with Lithium batteries except for one occasion I was attempting to solder directly to one, left the soldering iron on the connector too long which conducted too much heat into the battery - whereupon it exploded. I’ve had that happen with NiMH, NiCd, and regular alkaline and zinc-carbon batteries too.

The only functional issues I’ve had with Lithium batteries of any sort - particularly LiPo - is that they tend to swell if charged at an excessive rate - which most chargers seem to do by default. This drastically shortens their lifetime, but (so far) hasn’t caused any issues.

What I DO notice is that most chargers are designed to get the battery charged as rapidly as possible - get the toy back in the air again! - and the devil take the wear-and-tear on the battery.

Projects I’ve made with LiPo batteries, (my granddaughter’s headbands with programmable NeoPixel LED’s), use a slow charger - that I deliberately programmed (by selecting the programming resistor) to slow-charge at 100 ma instead of the 500 - 1000 ma they normally use. 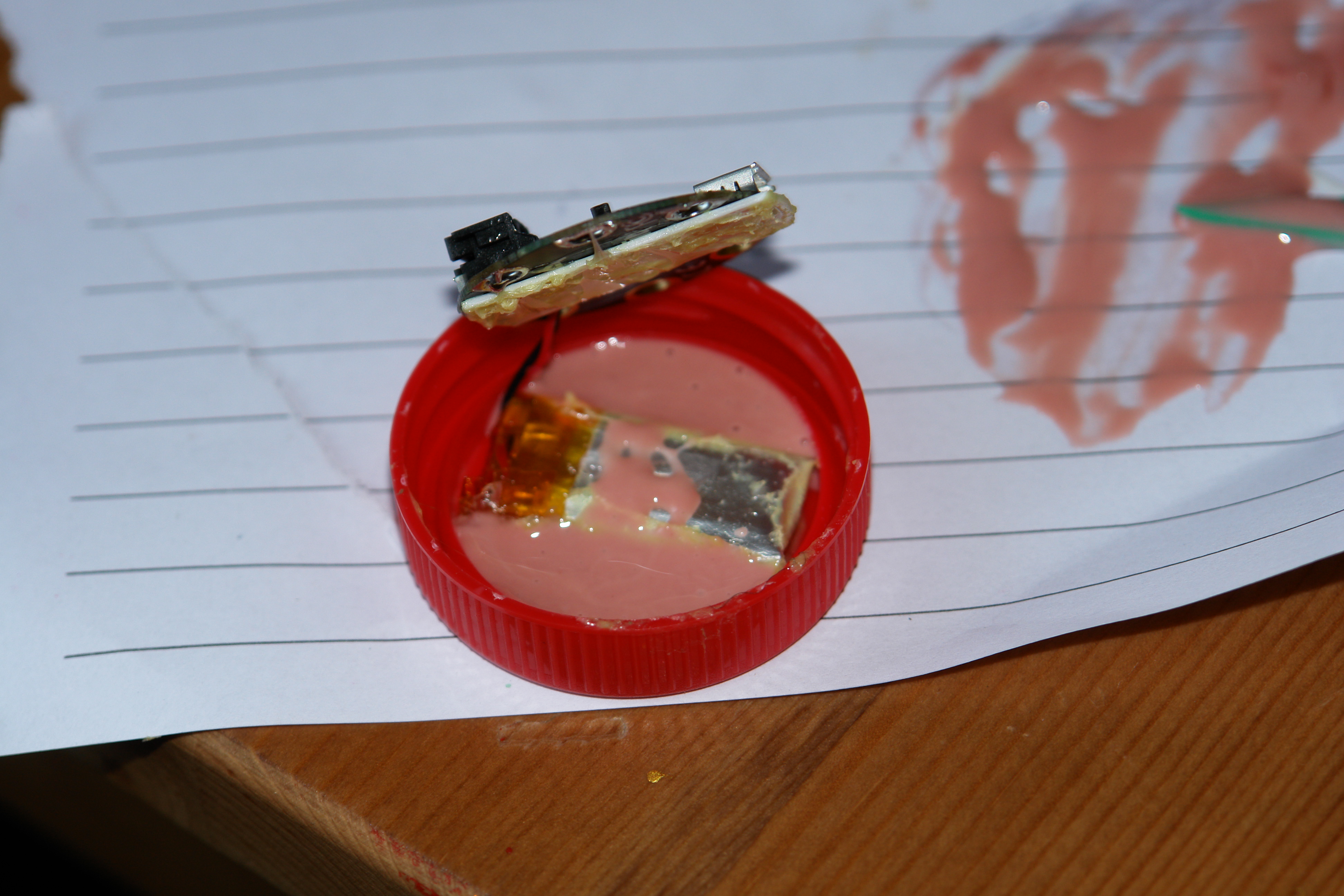 Here I’ve embedded a small LiPo device into the headband’s enclosure. The small circular PCB is an Adafruit Gemma M0 that I have programmed to drive the NeoPixel LED’s to rapidly flash random colors all along the headband. 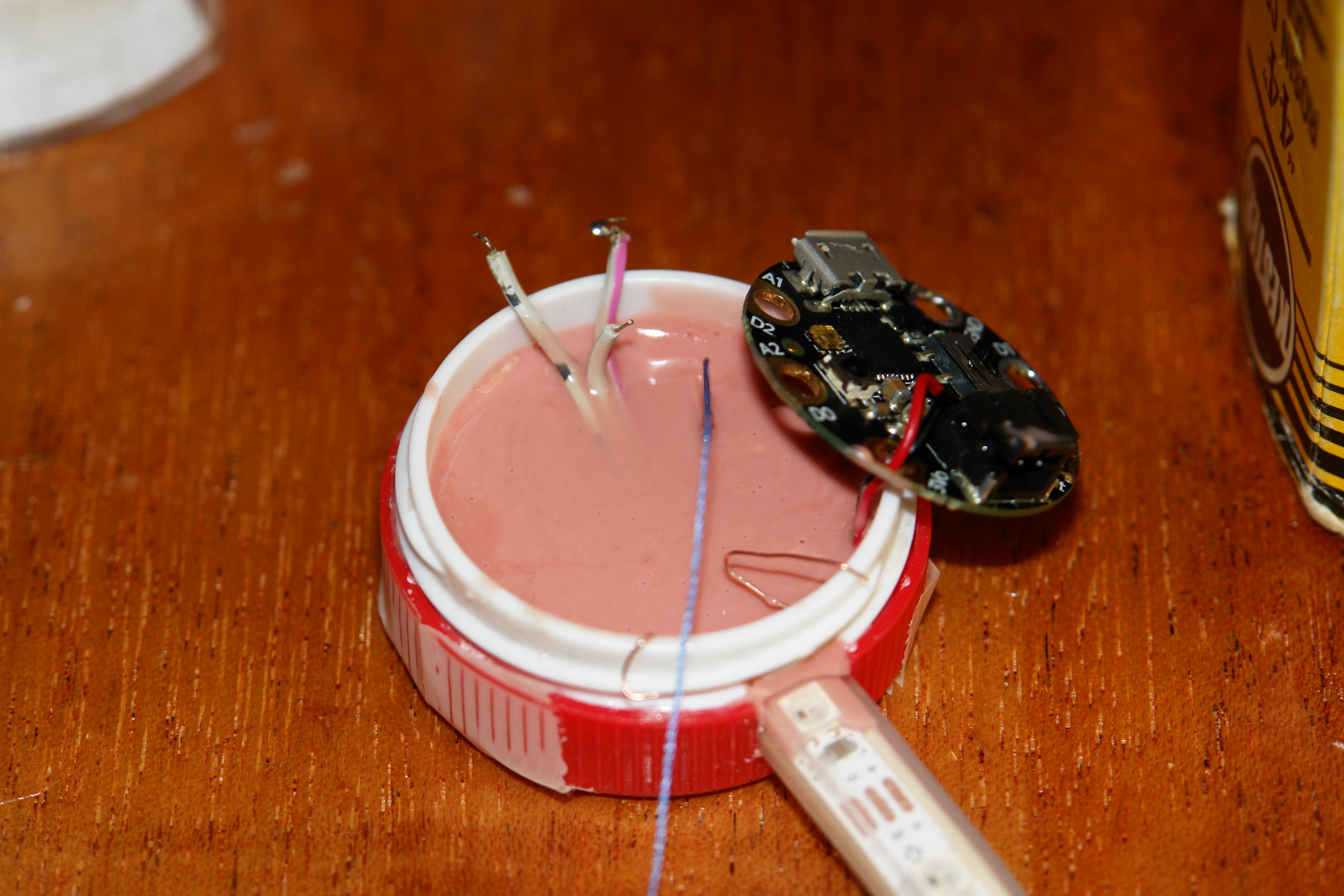 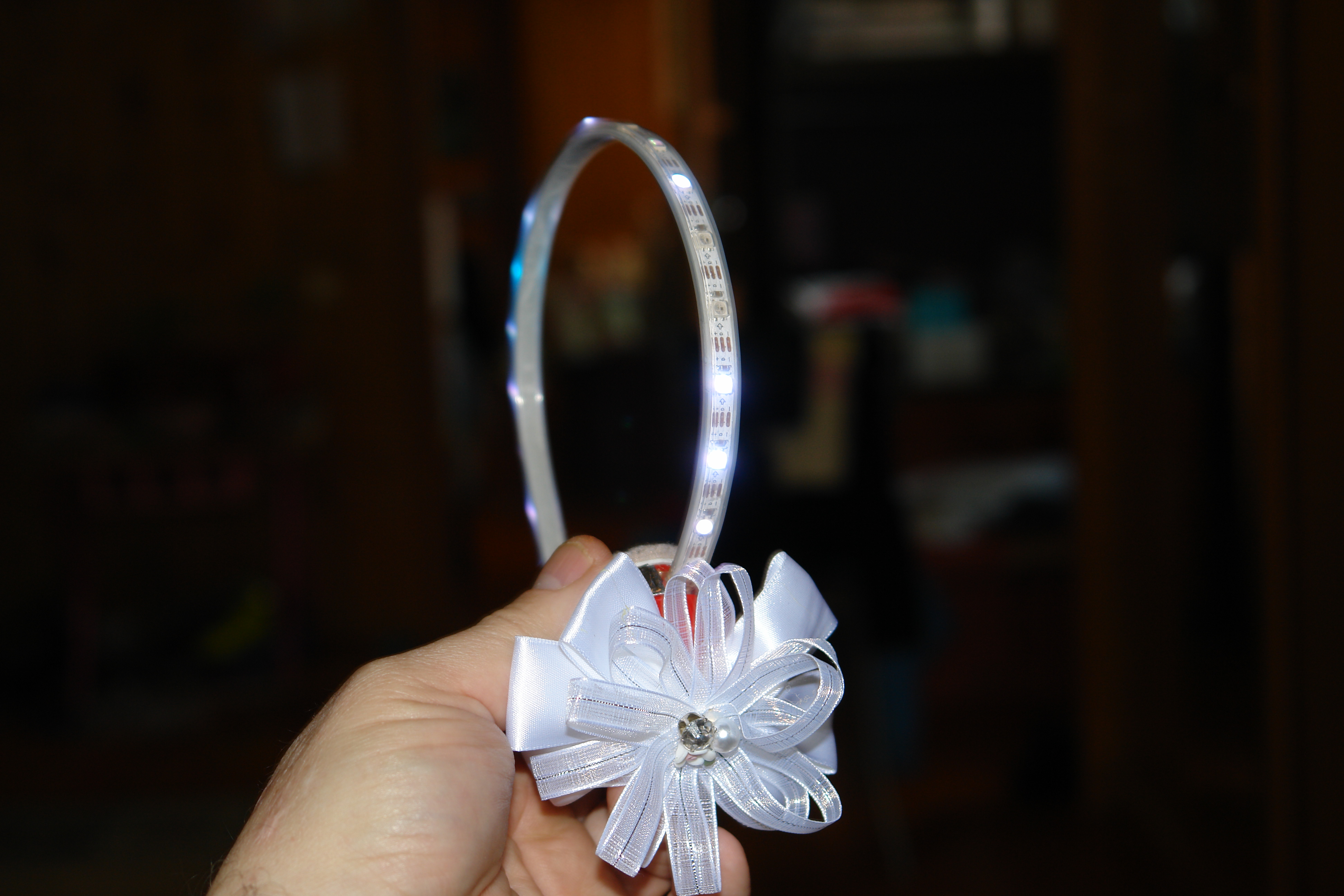 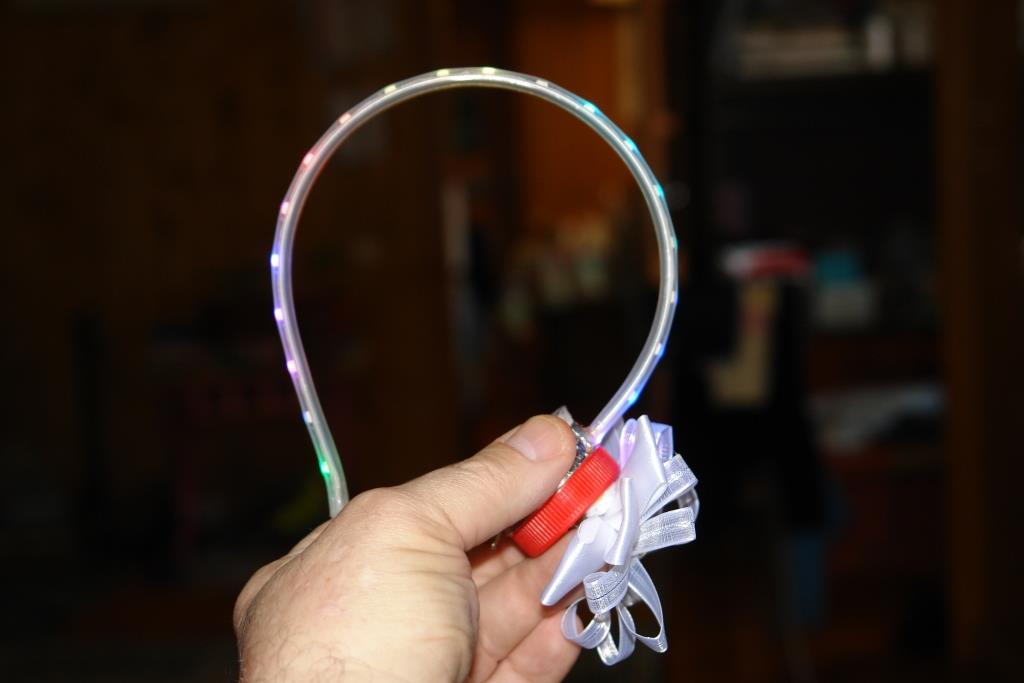 Below is the charger I use with it - and I have it set to its lowest charging rate. 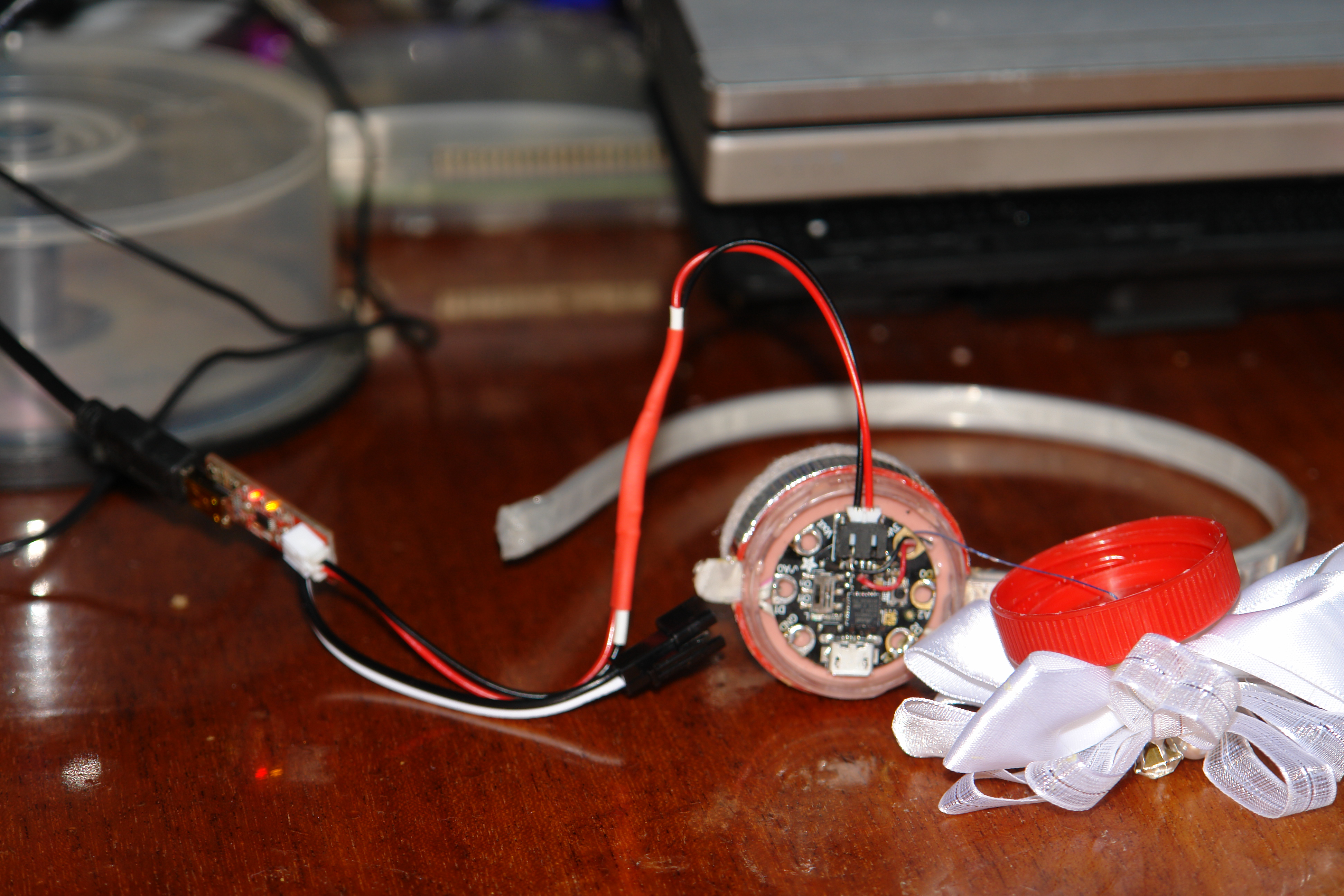 LiPo, or other Lithium batteries don’t scare me. But, like any other battery technology, be it lithium, NiMH, lead/acid/gell-cell, alkaline, etc. - you have to treat it with respect.

never experienced any issues with Lithium batteries except for one occasion

Sorry, I heard “almost never” and “only one exploded” and might have heard my wife calling a lawyer, or maybe a psychiatrist.

I heard “almost never” and “only one exploded”

Back in Russia and the new knee is doing fine!

The one and only time I’ve had problems was my own stupidity - I was soldering directly to a 3v Li button cell and had not properly prepped the surface first. And used a butane powered soldering iron that got WAY too hot.

An inadvertent short-circuit on Charlie’s battery pack - filled with freshly charged NiMH batteries BTW - almost caused a fire there too.

As Indiana Jones didn’t say in Raiders of the Lost Ark, “It’s the knowledge/skill of the user, not the battery technology.”

And while we’re on the commendation trail. . . . I am absolutely jealous of the progress you’ve made with Carl. Pretty soon he’ll be vacuuming the floor and fetching a cuppa coffee for you!

Seriously now, I wish you had a GitHub repo I could clone.

Thanks a whole bunch! (Long winded for a thank-you, but there’s a 20 char minimum)