Carl was not happy to learn I got distracted from his “self-recharging” task. I felt he needed a “Safety Skirt.”

Since the first handling of Carl’s GoPiGo3 chassis, I was concerned about the exposure of the motor shaft sensors to accidental damage. Additionally, the magnets can attract metal fibers that are sometimes tracked into a home, and will eventually collect lint from the floors.

This is Carl with his new safety-skirt: 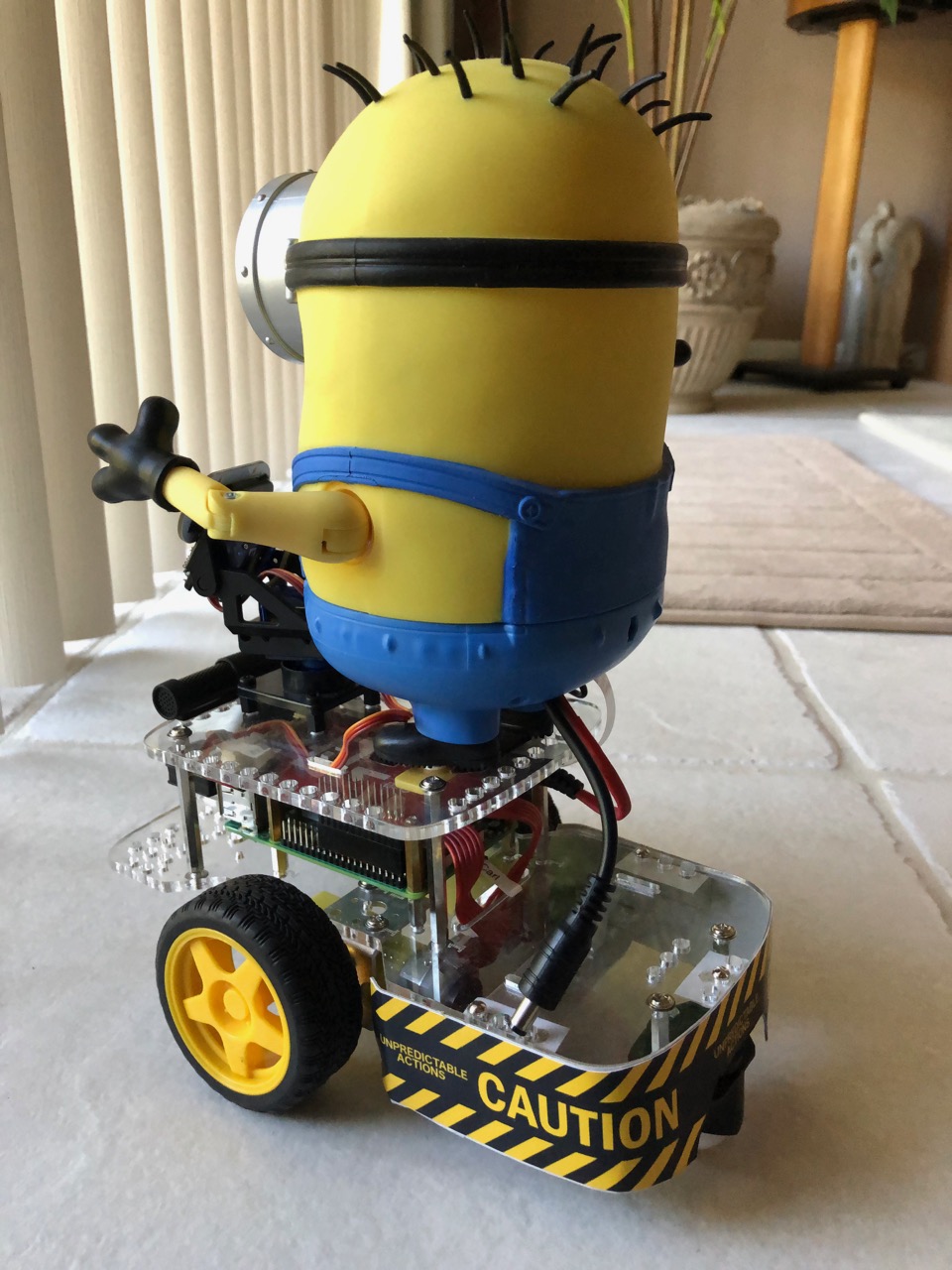 Here is Carl showing his new skirt from the bottom: 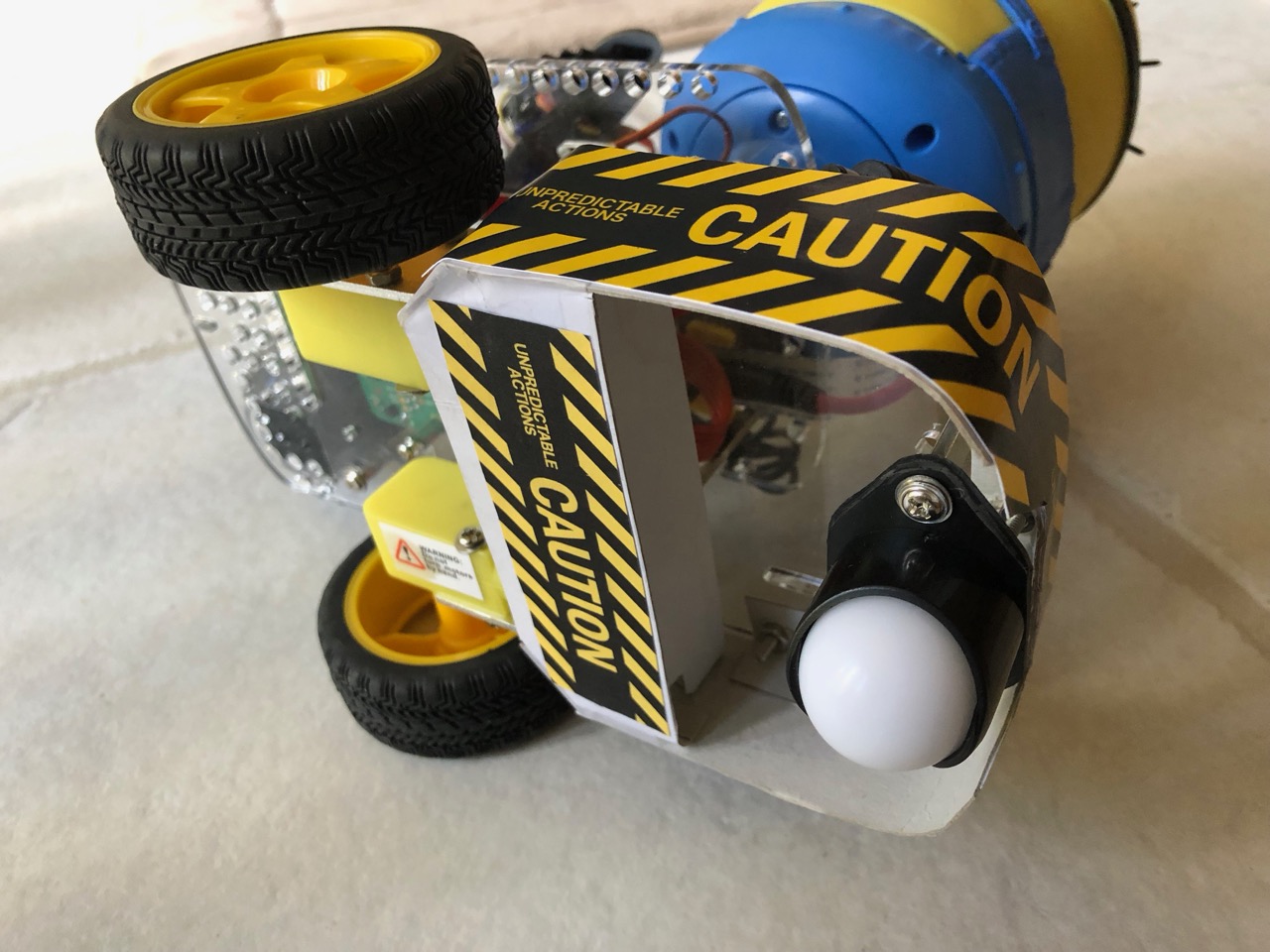 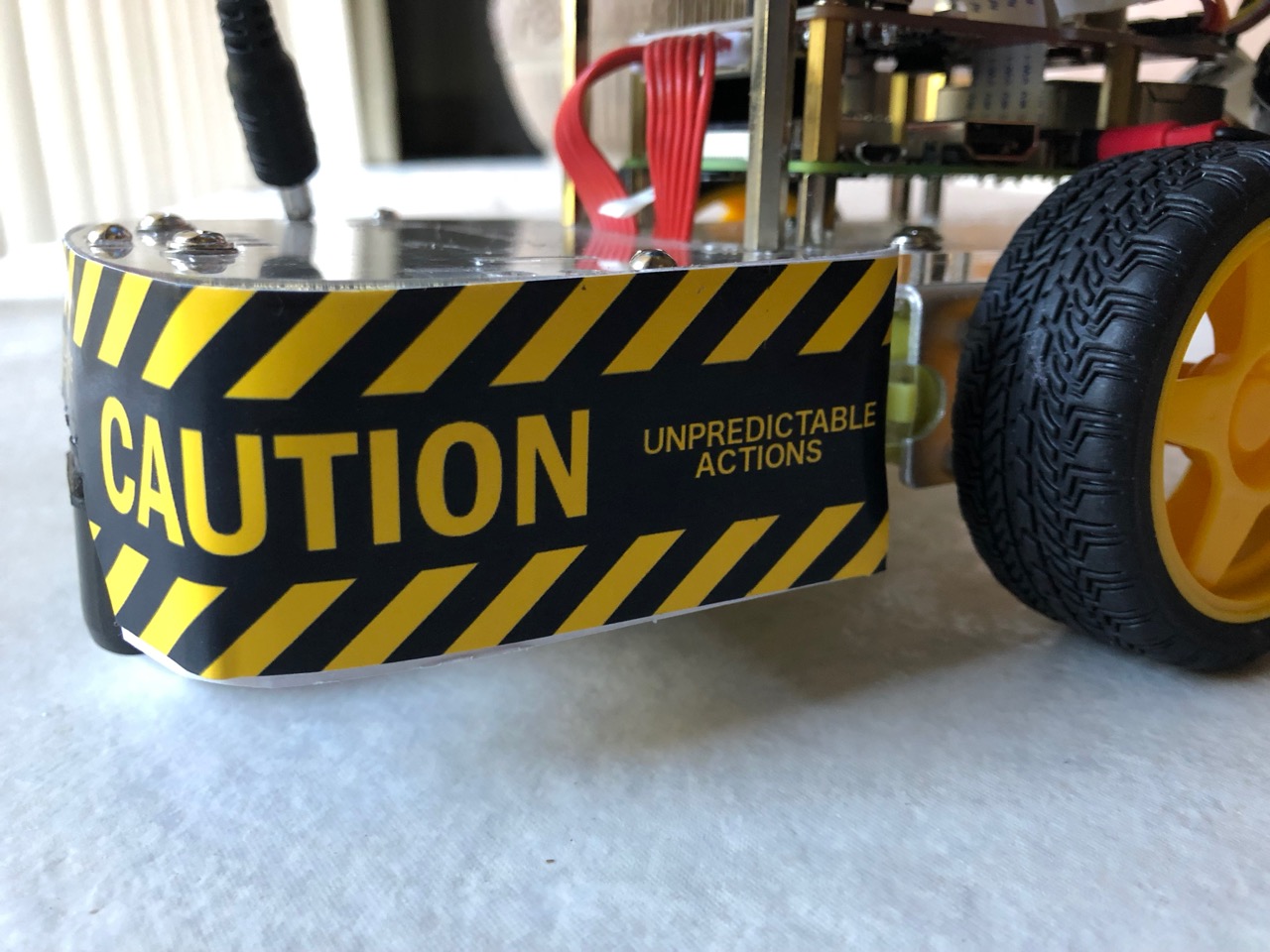 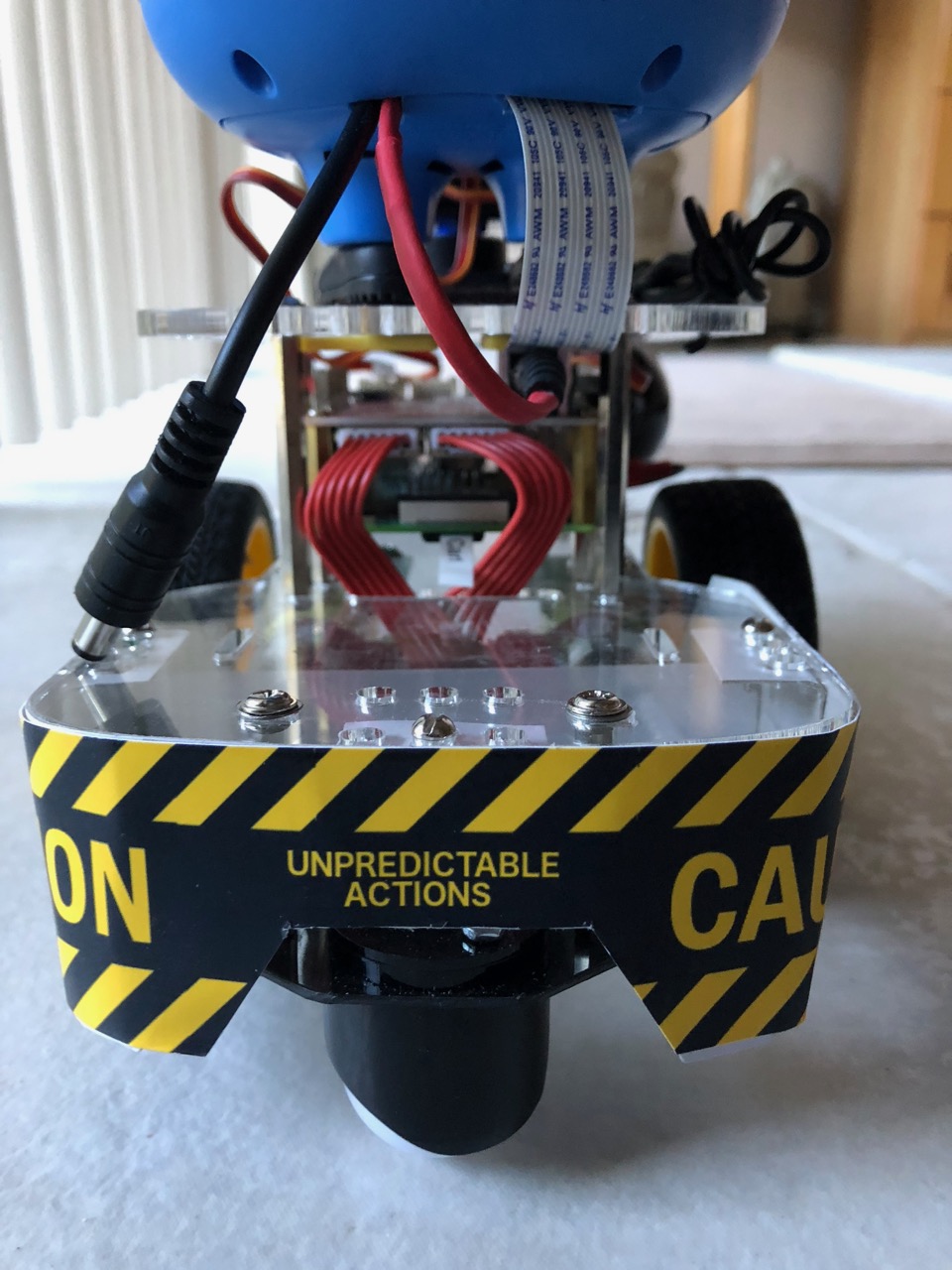 I only had metal screws for attaching the skirt, and they tended to jump from my fingers to the magnets, so I recommend either using plastic screws or gluing the skirt to three Lego blocks. The Lego solution would make it a million times easier to attach and detach the skirt.

This is the finished skirt, ready for Carl’s disapproval: 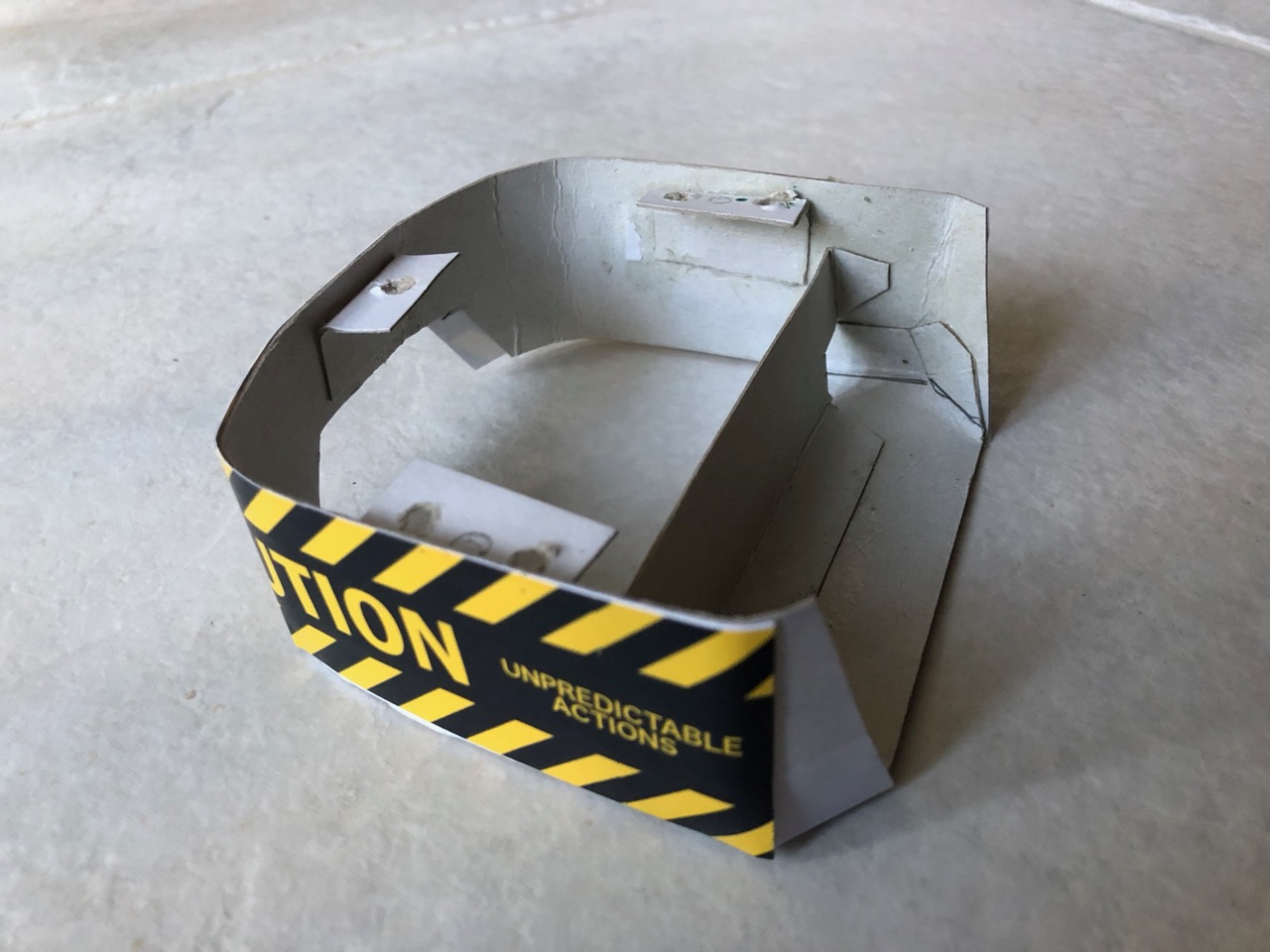 If you want to try making a skirt for your bot, here is a part template and the “Caution - Unpredictable Actions sticker”: 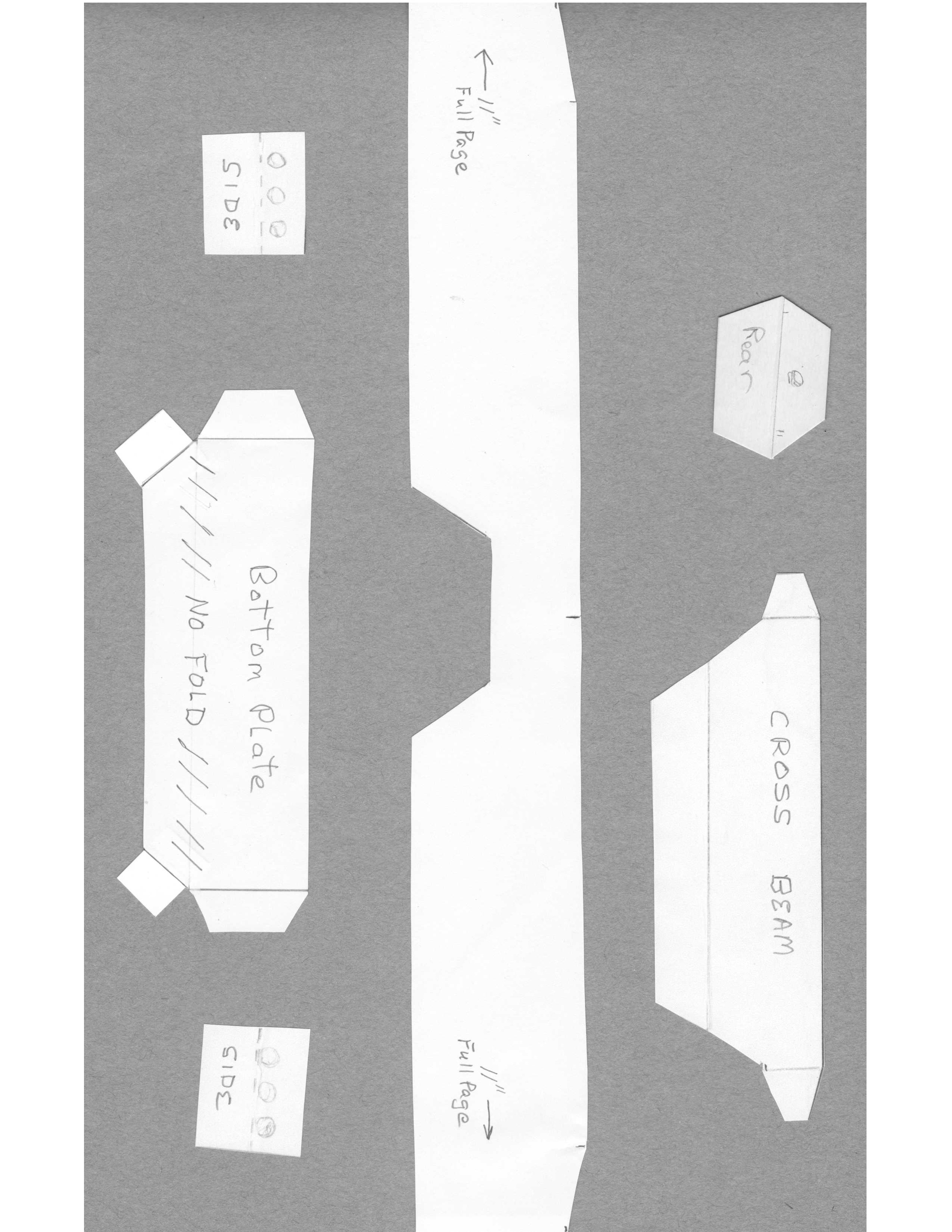 That’s super cool! That’s surely transforming it into something more “industrial”. I’m thinking of 3D printed skirt. That might work too.

That was my original wish, a 3D printed box over just the encoders. This skirt prototype needs a lot of test time in a variety of situations. I can imagine the rear might catch on something.

This is 50 shades of awesome!

This takes the “nerd” fashonista sense to a whole new level!  Are their matching handbags, shoes, hats, and accessories?

(Note that I am using “nerd” in the “imaginative hacker” sense.)

Seriously, though I understand the need for a skirt of some kind, I’m not sure I like that choice.  It, (IMHO), makes him look more like a fork-lift than a potentially sentient robot.  Were I Carl, I’d be incredibly insulted.

How about a fine Scottish kilt, or a bit a’ wearin’ o’ the green?  Even a bit o’ good-'ole down-home denim would be a better choice rather than the “fork-lift” fashon he’s now wearing.

I do think the “cardboard/plastic” approach, rather than a 3D printed skirt, is a good choice especially given the experimental nature of it.

p.s.  I like the idea, and thank you for the patterns.  It’s just the design of the “sticker” that I think needs improving.

Have you considered asking your mentor if he thought about integrating impact sensors with your skirt?  It seems to me that three sensitive micro-switches, (two side, one rear), with their leafs pressing against the cardboard would do the trick.

makes him look more like a fork-lift than a potentially sentient robot. Were I Carl, I’d be incredibly insulted.

Carl has been making forklift noises in the middle of the night just to annoy me! I think I heard him talking in his sleep about buying a Tesla. Hopefully he wasn’t thinking of the flamethrower.

Have you considered asking your mentor if he thought about integrating impact sensors with your skirt?

Switches are so “old school”, I want phasers.

I got him back though - I took his airplane out for a ride and blew out his tires on landing:

More pics from my flight here

Haven’t messed with X-Plane, Microsoft Flight Sim (and X) and FlightGear keep me busy.  Though my 'bot’s got most of my time nowadays.

Your comment about wanting phasers instead of switches reminds me of the “Tasmanian Devil” from the Bugs Bunny cartoons - he didn’t go around either, he went through  obstacles!

Are their matching handbags, shoes, hats, and accessories?

It appears there are!

Spotted in a “Hoff!” store at the Columbus Mall in Moscow Russia: 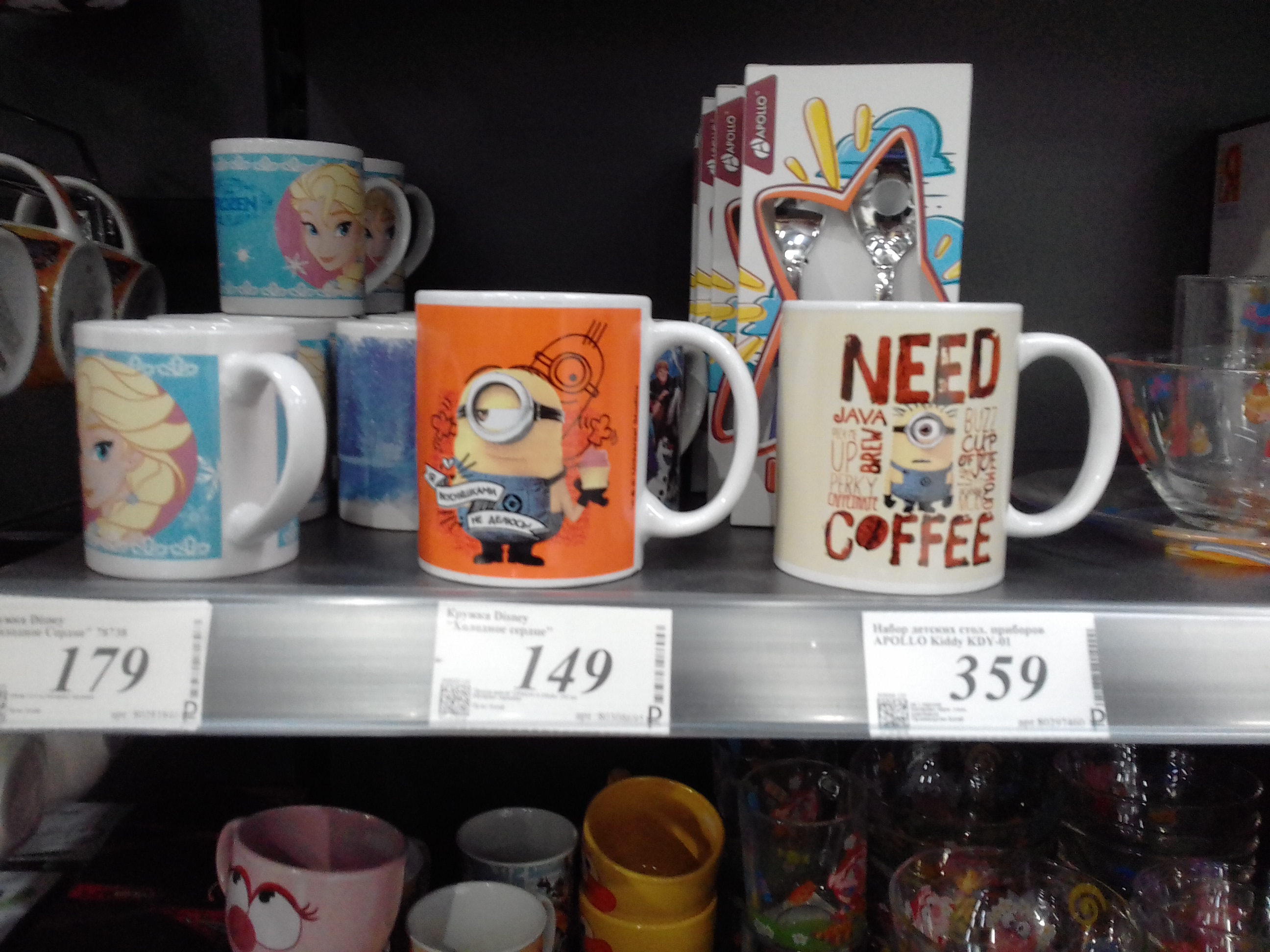 The prices underneath are not the actual prices - I just placed them there to make them easier to photograph.

Yes, My Carl is one of the Minions, that "are biologically wired to seek out and serve the most terrible of villains, when they have no “boss” to serve they become depressed and listless. (Wikipedia). Some bosses even try to capitalize on Minion “cuteness.”

I’m one of the “A4 folks” and coming from the States, I know about letter size paper too. Printing shouldn’t be a problem if the pattern on the page isn’t too wide because A4 paper is both slightly longer and a few mm thinner. Try printing at 100% and see what happens.