EasyGoPiGo3's stop() method does not turn off power to the motors

I noticed an interesting thing while working on my joystick project.

The stop() method in EasyGoPiGo3 does not release the motors.

Apparently, the easygopigo stop method does not put the motor driver “to sleep” in the same way you can turn off power to the servos.

In order to have the stop method turn off power to the motors, you need the following line added at the very end:

Adding that to the stop method of the easygopigo library should save you serious battery if you have the robot moving around and then stopping.

Not sure if 5 minutes will be enough to show the power usage difference. It’s a best effort at a controlled test for my fellow DM (Robot Dungeon Master).

I have to add useless explanatory text before the forum will allow me to post it, otherwise it responds with “Body seems unclear. Is it a complete sentence?” and refuses to allow me to post the message.

Not sure if 5 minutes will be enough to show the power usage difference.

( MOTOR_FLOAT is defined in GoPiGo3 class, so test was valid)

Absolutely no difference detected in load or power consumption
with or without the set_motor_power(Left&Right,-128)
after either drive_cm(10) or forward()

I’m working on condensing the 27 minute videos of the test so you can judge for yourself if you can see a difference.

I used your code:

The test code: OOPS MOTOR_FLOAT Is defined in the GoPiGo3 base class, so no issue.

TLDR;) - Inconclusive, or no proof stop_with_power_off() saves energy over stop()

CONCLUSION: Test does not prove stop_with_power_off() will have a measurable effect on playtime.

Did you notice that prior to shutting power off to the motors that they were “locked”, (i.e. could not be turned), but after shutting off power the motors free-wheeled?

These results are totally counter-intuitive as one would expect that sending power to the motor to lock it would actually “consume power” - and the power consumed would be distinct and measurable.

Can you provide details about your setup, perhaps including a schematic?

One thing I am tempted to do is create a fixture that will allow me to place an amp-meter in series with the power leads.

Remembering the fancy supply I built, (and how could I forget it?!!), I attached it to Charlie and ran both ways.

The results were, (being generous), inconclusive.

The measured current draw was about 0.3± amps at 12 volts, with a variation of almost a tenth of an amp.  It appeared to trend higher with power being delivered to the motors, but the variation was so high that it was impossible to distinguish a real trend from the noise.

Visually, there appeared to be about a 0.05 - 0.10 increase in current draw for the motors being driven at 300 dps in free air, (not actually moving the robot.), with about a 0.05 amp increase if the motors are not being allowed to free-wheel when stopped.

Conclusion:
If I have to filter the results using Bessel functions to see whats happening, the results aren’t worth talking about!

Interesting observation:
The current draw of the robot as measured at the 12 volt battery terminal with no other external attachments, (monitor, keyboard, joystick, etc.), was extremely noisy, though the voltage as measured was rock-solid.

It would be interesting to try filtering the power using a few μhenry inductor - or a pi filter, (no pun intended) - to see what’s actually happening.

Additionally, it would be interesting to research where all this current noise is coming from - but that’s absolutely out of scope for me at the present time.

Did you notice any significant current noise in your measurements?

Did you notice that prior to shutting power off to the motors that they were “locked”, (i.e. could not be turned),

NO, NO - Not only didn’t I check that, the mere mention causes me to cringe. In addition to the sticker on the motors saying “WARNING: Do not turn wheels by hand.”, when Dave was brand new I wanted to run all the Dexter tests, one of which is an encoder test that instructs you to turn the wheels - I could feel that attempting to turn the encoders via the wheels was not a good idea. (I do remember running that test on Carl some years before and the wheels turned easily.)

OK - curiosity got the best of me - checked it and indeed the wheels turn freely after the test which issued a power off in the last phase.

Did you notice any significant current noise in your measurements?

Right now in the current poweroff_easygopigo3 test, “idling”, the current bounces between 0.279A and 0.285A with spikes to 0.345A. Of course this is not a bare machine test - I have a number of user processes running in addition to the pages and pages of system processes running.

Can you provide details about your setup, perhaps including a schematic?

NO, NO - Not only didn’t I check that, the mere mention causes me to cringe

The real danger of that is “forcing” the motors, not turning them.

If the motor does not turn easily when you try to move the wheels, then don’t force them.

That sticker is a great idea for those who don’t know the difference between a gentle nudge and using a breaker-bar, as the typical classroom often is.

Right now in the current poweroff_easygopigo3 test, “idling”, the current bounces between 0.279A and 0.285A with spikes to 0.345A. Of course this is not a bare machine test - I have a number of user processes running in addition to the pages and pages of system processes running.

My system’s variation was over a tenth of an amp idling, and even more so when the wheels were running, and I don’t have a zillion processes running like you do - just the “plain vanilla” GoPiGo OS stuff.

The results seem to suggest if all motion is via forward()/backward() followed by sleep(x), stop(), power_off(), then no additional playtime will be granted.

This “GoPiGo3 Mythbuster” calls the hypothesis “True, in some cases …”

27 minute video and extracted measurements available on request - I gotta get away from the keyboard now for my Monday 5k.

Here are the measurements for the second test run (same result as first): 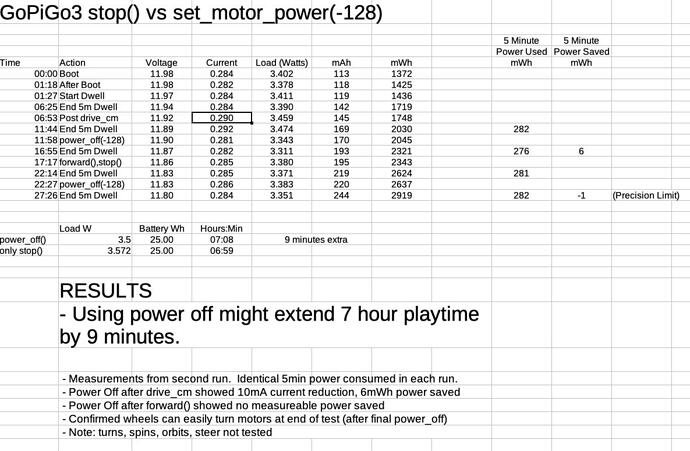 Code and results on GitHub

Well, there goes my fine theory down the tubes.  You might want to look up “Falsification by experiment”.  The name’s strange but what it means is “you had a fine theory, but my experimental evidence poured sand all over your barbecue.”

Are you going to publish this on the GitHub issue?

Are you going to publish this on the GitHub issue?

No, I’m not getting involved in the issue.

My interest was to see if you had discovered a “GoPiGo3 Fountain Of Youth”.

You correctly identified that something is going on, and gave me an explanation why I couldn’t run the encoder test on Dave. (Would have worked if I tried the encoder test before the motor test.)

Thank you for putting to rest one mystery-of-the-universe unbalancing my world.