Assembled GoPiGo according to instructions (I think). I’ve downloaded bonjour. I’ve connected power code via usb. GoPiGo card has green light next to power switch and Raspberry Pi board has a red light next to battery input. SD card and WiFi dongle are both firmly in place.

I downloaded “Fing” and no Dexter type product. There is a “CyberTan Technology” item but I am unsure as to what that is. Could that be related?

Hello there
If you don’t have any green light and yellow light next to the ethernet cable, the most likely option is that your Pi didn’t boot properly.
You can take a look at this video of a proper boot up. Let me know if you get the feeling this is what’s happening to you?
(note that the video was filmed with a Pi2. If you have a Pi3, the leds on the Pi are in a different spot but they behave the same way)

If you think this is your issue, you can re-install the OS on the SD card with this tutorial

Let us know if you have any question!
Cleo

I have buy a GoPigo kit with a Dexter SD card and a Wifi dongle.
I have fallowed all the instructions to assemble the GoPiGo.
Then come the Hardware Setup and when I connected the Ethernet cable , no reaction , the LEDs didn’t lighting !

N.B : Bonjour is instaled and when I ping dex.local, the host is not found !

What is wrong ? Is the same issue as as above ?

Make sure you have a good connection. Also make sure the port on your computer isn’t broke. You could try plugging it into another computer and even trying another cable.

@graykevinb
My port is correct, I reinstalled the operating system on the SD and now the LEDs light up but can not ping on the local
On the Pi Boad, only one green LED is present on the Ethernet connection.

What’s wrong ? As we bought the kits for training project, we now have to return it to be refund ?

I have now set a static IP , how can I access dex.local to setup Wifi ?

Hi, actually @graykevinb may have missed a step here.

First, I would double check that you put the SD Card in before powering up the GoPiGo. If you reverse this process, you can corrupt the SD Card. It sounds like you’ve reburned the SD card, and we’re past that.

Your PC should be connected to the same wifi network that your Pi is connected to. Just wanted to check that this is correct in your case?

Now that the ethernet port is lighting up, your Pi has a connection to the network. If you have bonjour installed and you are still unable to connect by typing in “http://dex.local” in the browser, and you’re not able to ping dex.local on the command line of your PC, I recommend that you use the Fing App (instructions here on how to use) to find the IP address of your Raspberry Pi on the network.

Once you make the connection and can see the Raspbian for Robots page, you should be able to click right into noVNC.

Also, I’m assuming you have the GoPiGo2; here is a page with more information on getting setup and connected.

@JohnC @graykevinb @cleoqc
I have manage to connect a keyboard , screen and mouse.
I have a bus error as you can see on the attached picture, what that means ?
Really frustrated to not enjoy my GoPiGo since I bought it !

Thanks in advance to help me 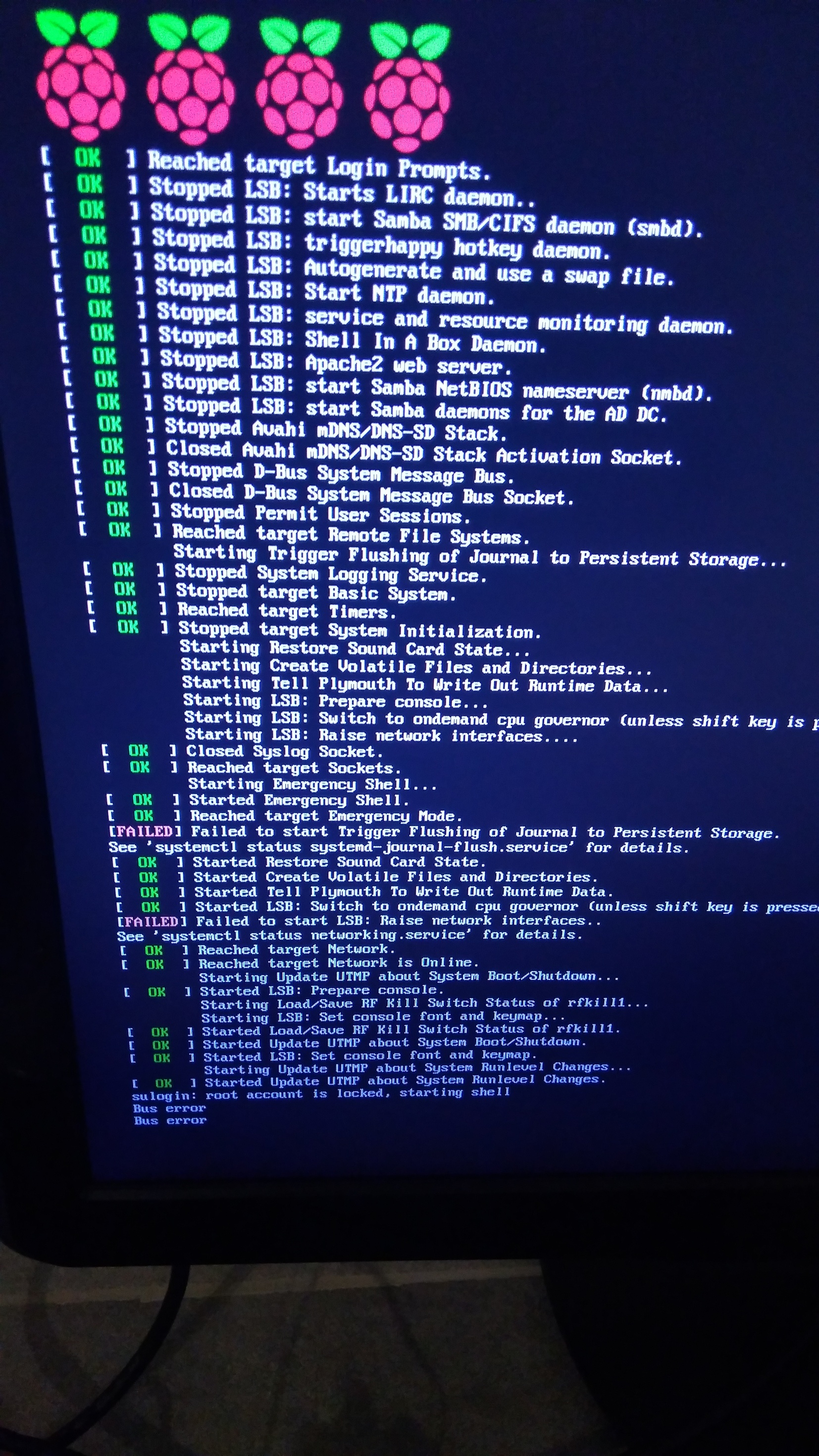 My guess is that there is something wrong with the SD card. I take it won’t boot up then? If there is now shell access, you can’t do too much to fix it.

Don’t worry we’ll get it working. Everyone else’s works so your should too. I highly suspect that there is something wrong with the SD card. It could have got incorrectly written in the factory or something.

It sounds like your system is sick. I quote:

Doing it so can help us understand if there’s an issue with the micro SD Card or with the Raspberry Pi.

Ok experts! So, I have to buy another 8GB SD card and leave the one I bought at Dexter?
Do not hesitate if there is a preference for SD brand.

You can try and re-image the card. Are you running DexterOS or Raspbian for Robots?
It’s doubtful that the card itself is defective (although it’s not impossible, it would be unlucky)
You can follow the steps in the tutorial on how to burn your SD card

@ImpalaConsult, @cleoqc’s advice here is spot on. From the picture you’ve posted above, it looks like the Pi is not booting. There are two likely causes:

The best way forward is to re-flash the SD Card, and try to boot the GoPiGo first with your USB Power supply attached to ensure the Pi is getting enough power.

This video shows what a successful boot should look like with a Raspberry Pi and Raspbian for Robots. After you re-flash the SD Card, does your Pi start like this?