One day I turned my GoPiGo on and I looked at the python code. I went to recent and none of my programs was there! This isn’t the first time it happened, and the other times I blamed the SD card corrupting and I got a new one. But I was learning command line and when I did ls on the command line I saw all m python programs!.. In different folders! 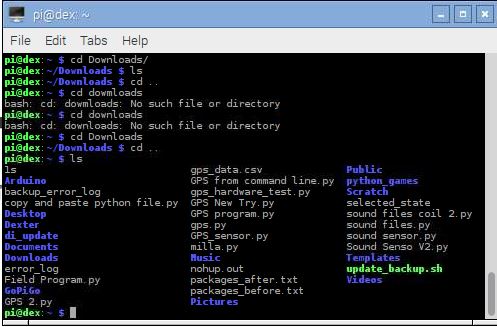 My programs include: Field Program.py
GPS from command line.py
Sound Senso V2.py
and all the other .py programs (except gps_hardware_test)

where did they all go?
Why did they all go?
And more importantly, can I get them back?
I’ve screenshotted them but they are 300+ lines of programming and I don’t particularly want to do it again. Not to mention this keeps happening

Thank you so much

This is a Unix system, and as such it’s sensitive to capital letters.
From what I see, your folder is named “Downloads” but you are trying to cd into “downloads”

This would work on a Mac or a Windows computer but not on a Unix one.

Also, Unix has some issues with filenames that have a space in them. It sorta support spaces but not all that well. You’re better off using an _ than a space.

Hello and thank you for answering @cleoqc !

My question was actually about the fact that my python programs(you can see them just under general ls) have disappeared(if I want to program in python, I go programming, python, recent files, and none of them are there) and now I see files with the exact same names pop up in command line under different libraries. 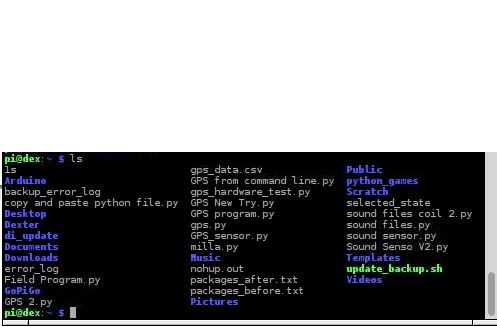 At first, I thought they might be arranged in sensors by milla.py doesn’t use any (though thats the odd one out, Field Program.py uses encoders and the others use the sensor they’re named after(exept the files that aren’t programs.

My question is: Why is this happening? Do these programs still exsist how I know them? Can I get them back (especially field program, that one is 200 lines long

Thank you so much and I’m sorry for the confusion. I hope I’ve explained it better this time.

I’m really not certain @ikhouider.
I have never seen files move around before. We’re not running any processes that come even close to moving files around…

Maybe ask what’s happening at the Raspberry Pi forums ? As this would be an issue with Raspbian.