Again, never having messed with even the first version of ROS, I’m not exactly an expert here, but it seems that things are way too complicated.

[my opinion]
The only real limitation to the GoPiGo-3, (aside from the programmer’s skill), is the 'bot’s physical size and hardware capabilities.

These limitations are easily explained when you realize that the GoPiGo was originally designed to be a robotics teaching tool and not a DARPA/Steroid infused Battle Bot.

So far, I have not seen anything you can do in ROS of any flavor that could not be done in R4R.

I also believe that, as robots go, the Dexter/M.R. implementation is as simple and elegant as anything else I’ve seen.

At the risk of mangling a line from Fiddler on the Roof  “I can do things in Bloxter that would cross a rabbi’s eyes!”

I have not yet seen the limits of Bloxter, except for the implementation of undefined hardware like a LIDAR.

And that’s not even a limitation since new blocks can be defined. (I’m still waiting for the spec’ for that one. It’s been promised, but there appears to be too much on their plate as yet.)

And that objection goes away when using R4R.

Again, the interface is clean, remarkably intuitive, and relatively simple when compared to other robotic languages I’ve seen.

Also, based on the stuff both you and @KeithW are doing, ROS seems to be needlessly complex. It seems to embrace complexity for its own sake, avoiding simpler and more elegant ways of doing things.
[/my opinion]

Even while working on my Remote Camera Robot project, I am amazed by how difficult it is to do simple things.

The main control routine on the client side is a gigantic piece of code called “nipple.js” that is absolutely huge and virtually impossible to figure out.

Part of this, IMHO, is because it wants to do too many things at the same time that should really be broken out into separate routines.

Every time I end up in a situation where things appear to be needlessly complex, I try to take a step back and work out how to do it in a simpler way.

Is it possible to stack a Grove-Pi board on a GoPiGo-3?

What I mean is “Will it work? Will it add more usable ports to the GoPiGo 'bot,?”

based on the stuff … you … are doing, ROS seems to be needlessly complex.

That “you are doing” is a key point there. I want to unlock the potential that comes with not having to write every single new capability for my robot.

All the smart ROS folk already wrote those features, six ways to Sunday, and all I need to do is make my bot broadcast every little thought that passes through its head over my local net, and make my Mac listen for those thoughts. I can try out all kinds of other peoples’ code on my Mac like visual object recognition, mapping, goal driven path planning, or visual obstruction detection, or even that elusive wall following I asked about years ago. (What self-respecting robot company releases their robot without a wall following example? Come on ModRobotics - please… )

I am pretty sure that some of the features will be able to run on-board the bot in a non-realtime fashion, while the bot sits patiently waiting for its next great idea for physical exercise.

ROS is certainly complex, way way more complex than the most sophisticated multi-tasking python example that the GoPiGo3 “Master” @RobertLucian left us with Intelligent Obstacle Avoider Robot and the Remote Camera Robot that you love so much (not sure if that one was @cleoqc or Robert).

Folks that have already “ROS-ified limited functions of the GoPiGo3”:

From what I can tell, no one has actually focused on using ROS self-contained on the GoPiGo3, nor exposing every prescient thought of a RaspberryPi 3B+ GoPiGo3. Perhaps I am simply naive to think anything useful could be accomplished as a self-contained ROS on GoPiGo3 robot, but I plan to find some of the limits.

For the last three years Carl has been recording every drive and every turn for 4915 feet of travel and over 1 million degrees turned, but I have nothing to visualize those excursions. If that had been put in a ROS bag instead of a self-conceived format text file, I (believe I) could actually see where he went on the big displays of my MacMini. Not that seeing it would solve any questions of the universe, but it might be (boring) fun.

So yes, ROS is complex, but hopefully far from needlessly so even for me.

Folks that have already “ROS-ified limited functions of the GoPiGo3”:

Wow - that’s an impressive list. I was unaware of that.

I suspect you are right that the added complexity of ROS2 was to meet the demands of more sophisticated robots. I’m sure the changes were driven by what turned out to be real world limitations - and the developers did decide to forego backwards compatibility to improve future functionality.

For me the GoPiGo3 was a vehicle for learning and experimenting with ROS. So using R4R wasn’t even a consideration. ROS was designed to serve as a framework for lots of different robots so that programmers didn’t have to start from scratch with every new hardware platform. That’s why I’ve wanted to learn it - so I can move to different platforms for different uses, but be able to translate my knowledge between them relatively easily.

but I plan to find some of the limits

ROS seems to be needlessly complex

There’s a saying attributed to Einstein (w/o any real proof btw) along the lines of “make everything as simple as possible, but no simpler”. I think ROS is actually that way - there’s a reason behind each bit of complexity. But it was created to ultimately make life easier for a developer.

Since Gazebo wasn’t staying alive, I skipped past Chapter5 and started Chapter6 which introduces getting your GoPiGo3 to talk ROS.

Since my ultimate Chapter6 goal was to get ROSbot Dave talking and have my ROSdesk (VM on Mac) listening, analyzing, and displaying everything, I decided to divert to trying:

to prove the new ROS2 dynamic discovery is going to work for me.

Uh…NO! Hold the cigars, ain’t no baby being delivered today.

After 24 hours of questioning and “try_this_that” on answers.ros.org and VMware community,

with a little luck and magic updating both systems yielded a breakthrough.

Also my “ROS2: Is it too soon to migrate?” question got picked up as “News of the week on discourse.ros.org” getting lots of attention, and a suggestion from a ROS2 guru on launch files with conditional arguments - “upgrade to Galactic and here’s how to do it”.

Let that teach me to choose the Long Term Support ROS2 version for my efforts. Actually, I did buy the Galactic T-Shirt when it was available last month, but was not brave enough to install it.

Adventures in playing with the “real serious robot folk” continue … 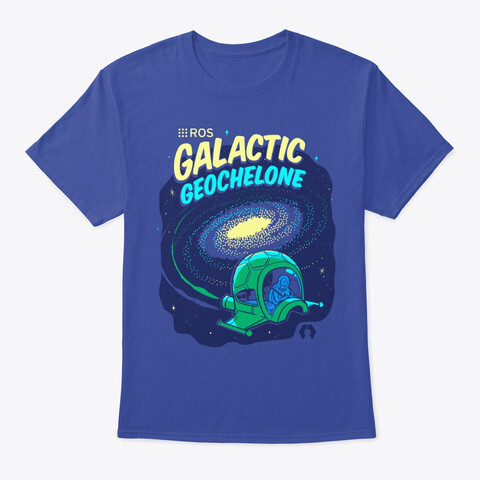 Wow - congratulations. Real progress.
Adding a VM in the mix definitely complicates things - I fortunately had an old laptop I run linux on just for my ROS work - makes life simpler in many ways. In theory I can write my code on my desktop and then sync it with my laptop and robot via GitHub. In practice I don’t have that workflow quite down yet, especially since I tend to iterate quickly while running tests, so I’m on the laptop. I have shifted to using VS Code on my laptop to remotely edit files on finmark (using VS Code’s remote explorer. That seems to be working fine).

Let that teach me to choose the Long Term Support ROS2 version for my efforts.

You’d think that would be the better way to go, but maybe ROS2 is immature enough that there are still gaps that need to be filled, and backports aren’t keeping up.

I did buy the Galactic T-Shirt

I love the design (and colors) of the Galactic logo. I guess I like “space” themes - I really liked the ROS1 Lunar logo as well. Too bad neither was an LTS version. I’m thinking I’ll shift when it get’s to “H” - hope they have a decent name and logo

May 2022 Humble Hawksbill - claims to simplify launch arguments and parameters.

T-Shirt not out yet.

T-Shirt not out yet.

Yeah - they usually make them available right around launch time. I don’t think my current stack of ROS t-shirts will wear out by next May.
/K

with a little luck and magic updating both systems yielded a breakthrough.

I Guess I used up all my luck and magic… DDS is back to not working across the net today.