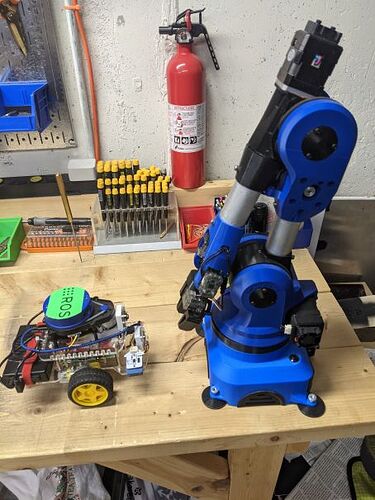 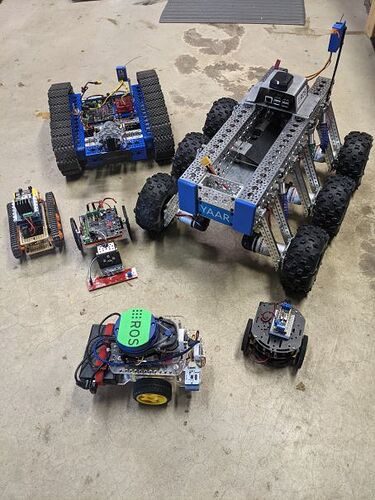 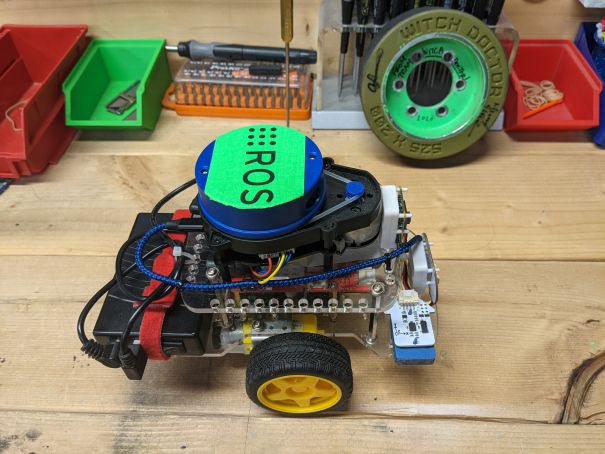 (with a guest appearance of a wheel I got from Team Witch Doctor of BattleBots - used this past season).

Oh, Lord Jesus help me, what a group!

When you get to the point where you can have custom wheels, (with your name on them), so you can go get your 'bot destroyed - THEN you need “an intervention”.

When I was younger, (make that read MUCH younger), my hobby was electronics and short-wave radio.

I started somewhere between 8 and 10 with a small table out in our garage. When we moved to Long Island in 1972/1973, I occupied the entire basement of my parents home. (except for the laundry area, and that was due to it being fiercely guarded by my mom!)

Here in Russia I have bee reduced to another “small table” (and a cabinet), with storage space under the stairs. (we don’t have a basement).

P.S.
Once I get my taxes done, (almost done!), I will get back busy with Charlie and update my multi-boot research.

Thanks for the pictures!

The big blue thing looks like the microscope from Hell.  What is it?

One thing I am actively researching is how to add additional inputs and outputs to the GoPiGo 'bot.

Once I get the multi-boot set, I want to “telescope” back in to my “Remote Joystick Robot” research with the idea of adding extra sensors and/or servos to Charlie so that he can interact with his environment more actively.

I was thinking that a Pivot-Pi board might be suitable, though I have a Google AIY board that includes servos, mic input and audio out.  I just don’t know if that will be compatible with the existing GoPiGo board, especially since mine has only 26 pins and the AIY board appears to want 40.  The real “bitch part” is that the header pins do not carry through like the Pi’s pins do, so there’s no way to stack something on top of it.

he big blue thing looks like the microscope from Hell. What is it?

It’s a Niryo One robot arm from Niryo. I supported their initial Kickstarter project. I got the metal hardware and then 3D printed the other pieces. Runs on a Raspberry Pi.

It actually works great, and it runs ROS. I’ve done a few simple programs with it, but haven’t messed with it much lately in favor of my GoPiGo3. They don’t make this one any more in favor of an updated model.
/K

I didn’t realize the AIY board could run a servo. I suspect it would be a headache to try and use – who knows what pins the board is using on the Raspberry Pi.

The PivotPi at least lets you use I2C, which should be a bit more straightforward. And depending on what sensors you want to use, while searching around this morning there are also boards and cables that will let you shift from the Grove ecosystem to the Adafruit Stemma/Stemma QT and the Sparkfun Qwiik ecosystems (although you have to watch the voltages). So may provide a lot of options.

As for servos, you’d just have to make sure you have a way to power the servos.

I look forward to seeing the experiments.
/K

The AIY (sound) board has inputs, i2c, drivers, servos, stereo mikes and the capability for stereo output by cutting a jumper and adding another sound board.

No joy on the AIY board.

Not only does it have a connector for all 40 pins, it appears to use a great number of them. Based on the traces I can see, I suspect that it may be using the two “alternate” SPI interfaces and possibly a third i2c interface as well.

If I had a GoPiGo board that passed all 40 pins through, it might be worth a try, but as it is, no enchiladas for me Senior!

I also have a few other 'bots. Two GiggleBots for the granddaughters and a SparkFun micro:bot for me. Unfortunately, Charlie is a jealous god and is taking up all my time - there’s just so much to explore and I have barely scratched the clear-coat, let alone the paint!

Not to mention I am having so much fun trying out my hardware experiments with him. I may not be the software gurus that @cleoqc, @cyclicalobsessive, yourself, or others may be; but one thing I WILL put money on is my hardware skills.

And I think that’s cool.

it appears to use a great number of them

That’s what I was afraid of.

Two GiggleBots for the granddaughters and a SparkFun micro:bot for me.

The micro:bit is a nice little starter board. I haven’t spent too much time playing with one though.

The micro:bit is a nice little starter board.

Me, being the masochist I am, make a “hobby” of trying to take the most pitiful and under powered things possible, and make them dance jigs.

In the robotics arena, the micro:bit isn’t a lightweight - with the MakeCode interface and the ability to program directly in JavaScript, it’s not something to dismiss lightly. There are firmware add-ons, (replacement firmware), that allows programming in C and such like too. And, like the Pi, it has a thriving “bare metal” programming community as well.

It’s never going to run ROS, and it is unlikely to ever have a LIDAR connected to it, but with the motors and servos it can drive, depending on the interface board, it does a pretty good job.

the micro:bit isn’t a lightweight

I certainly didn’t mean to disparage the micro:bit. It has a quite capable processor, and some fun add ons (e.g. the LED matrix). I just meant it was designed as an introductory board with an ecosystem to allow a beginner to ease into programming. I’ve never used JavaScript - I’m too used to Python (but you can use that too).
/K

I certainly didn’t mean to disparage the micro:bit.

Of course not and I didn’t take it that way. (At least I hope that’s what came over the wire. . .)

Some people look at things like the micro:bit and dismiss them as toys, not worthy of a second glance. In fact, when the Raspberry Pi was in the planning stages - and during the initial release of the “A” and “B” models - it was dismissed as a wannabe punter toy.

Even the initial Pi’s were outstanding and there was a lot of BBQ’d crow eaten by all the nay-sayers.

I’m not fussing at you per se, I just chuckle at people who dismiss things like this as trivial.

When I bought my GoPiGo-3, I wondered how long it would keep my interest before I exhausted its capabilities - was I spending $200+ smackers on an expensive toy that would last a week before I got bored with it?

I’m up to my eyeballs in “projects” and helping with various development efforts, and I’ve barely scratched the surface. . . The capabilities and interesting projects I can do with my 'bot will likely outlive me.

When I finally get to dig into the GiggleBot, I am sure that the same thing will happen - it will be much more interesting and involved than first glance.

“That’s another fine mess you’ve gotten us into Ollie!”  (