I’ve got some troubleshooting with one of my sensor : a digital light sensor (http://wiki.seeed.cc/Grove-Digital_Light_Sensor/)
Indeed, I am using two I2c sensors, a temperature & humidity sensor (https://www.seeedstudio.com/Grove-TemperatureHumidity-Sensor-HighAccuracy-Mini-p-1921.html) and the digital light sensor.
When both are connected, I got this error : Error accessing 0x29: Check your I2C address
When I am just using the digital light sensor, I got inchorent values like : Lux: 0 [Vis+IR=7, IR=-1 @ Gain=16x, Timing=402.0ms]
So, I don’t know exactly where comes from those problems. I think there is a conflict of adresses when there are 2 sensors connected but I don’t understand why I got strange values for the digital sensor ( the other sensor is working correctly).
Meanwhile, when I am doing : sudo i2cdetect -y 1 all the sensors are well detected.

@walkpto : Can you post a screenshot of the output that you get when you run

Also, are you running your own raspbian image or Dexter Industries Raspbian for Robots image. Can you post a screenshot of the error that you get too and a link to the programs that you are trying to run.

First, this is the screenshot of the output I got when I runned : sudo i2cdetect -y 1

Then, I think I am using a Dexter Industries Raspbian for Robots image, this is the result of uname -a

Now, this is the screenshot of the error I got when I am running this command : sudo python grove_i2c_digital_light_sensor.py 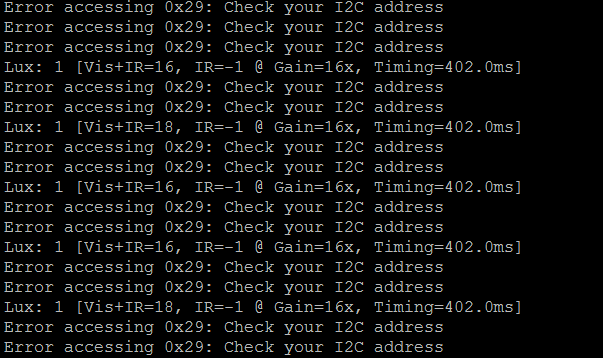 To finish, I’m adding the test log and the script of the digital light sensor :
log.txt (5.7 KB)
grove_i2c_digital_light_sensor.py (7.8 KB)

I’m still thinking there is a problem of address between the two i2c sensors. Or, maybe it’s just the sensor…

@walkpto: the i2c command shows that there are 2 sensors connected. Can you just connect the digital light sensor and run the program again and see if it gives any better values. Can you post a screenshot of the output too. I’ll try that sensor later today and let you know how it works for me.

Yes the two i2c sensors are well detected. I disconnected the temperature&humidity sensor, so the air quality one is just connected and this is the screenshot of the output :

As we can see, there is still a problem with the values. On the first line, maybe the values are coherent but on the other lines, it’s not coherent at all.
Moreover, I also tried another script, the one which is on this page :http://wiki.seeed.cc/Grove-Digital_Light_Sensor/
grove_i2c_digital_light_sensor1.py (10.4 KB)

And I got this result :

@walkpto I just tried out the sensor that I had and it is working pretty well with the code that we have on our repo. However it does fail when I tried out the example on Seeed wiki.

Can you upload a picture of your setup and a few pictures of your sensor. When and where did you buy the sensor from.

Hey @graykevinb, indeed I am using Raspbian for Robots and I just did an update in the directory /Desktop/GrovePi/Firmware with launching the script firmware_update.sh . But I got the same problems…

@walkpto ,
It looks like the sensor itself is a bad one and is not working properly. Do you have an arduino around to test it with that. Where did you buy it from, and can you ask them for a replacement.

I am having the same trouble with my digital light sensor as OP. What’s the solution?