Just how much ___ does a robot need

I have often espoused the concept of matching the GoPiGo3 processor to the needs of the particular robot.

Any starting GoPiGo3 user will likely use on average about 4% (0.15 load) of the Raspberry Pi 3B+ processor.

The Pi4 is said to be 36% faster on CPU processing, should reduce the lane finding loads to 25% for 10 FPS and 64% for 30 FPS, which probably leaves plenty of processor for all the other tasks.

When it comes to memory needs, most new GoPiGo3 users will use only a few percent of the roughly 850 MB of available memory on the Raspberry Pi 3B+ that comes with the robot.

Carl, uses 16% of his 873 MB of available memory holding the voice recognition model, and only 1% for all his other duties and “thinking”.

So it was a real surprise when Carl announced today “Memory Usage Above 85% Safety Threshold”. 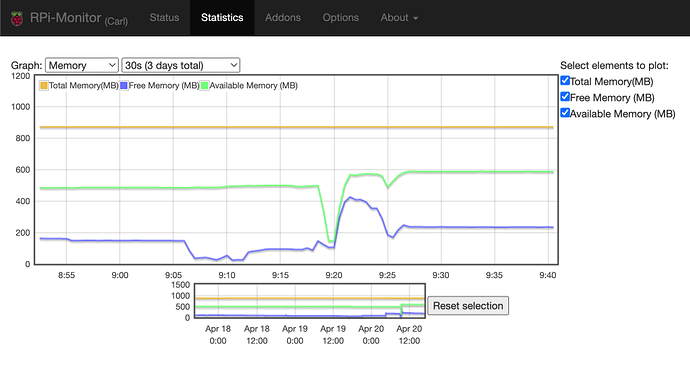 The (green) available memory dipped to 145 MB causing Carl’s health monitor to get worried enough to alert me not to be stressing him so much.

Turns out his processor load also went through the roof to 125% (5.0 load) but not long enough to cause temperature throttling. 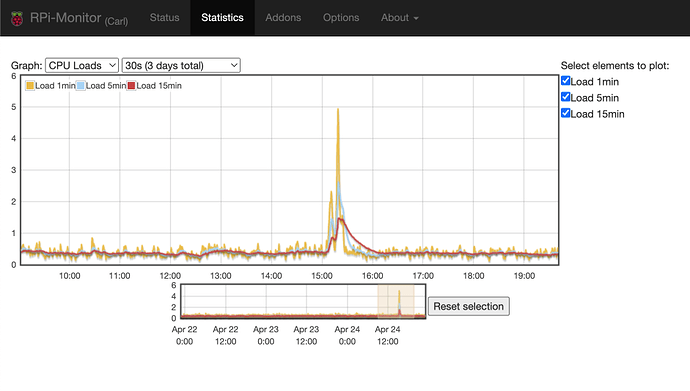 So what was I doing that caused my robot to worry?

I simply did a git add, git commit, git push of a ChatScript chatbot that was never published up to Carl’s github.

After 10 minutes of “hard work” Carl announced he was feeling healthy again and all was forgiven.

So what was I doing that caused my robot to worry?

I simply did a git add, git commit, git push of a ChatScript chatbot that was never published up to Carl’s github.

After 10 minutes of “hard work” Carl announced he was feeling healthy again and all was forgiven.

. . . and on Charlie, (a Pi-4), using VS Code and the “server” wedge on the robot itself, those commands are virtually instantaneous and Charlie doesn’t even break a sweat.

I don’t know how much of this is attributable to Charlie running on a Pi-4, that the VS Code on my laptop is doing the heavy lifting, (or maybe not?), or whatever else, so Your Mileage May, (and likely will), Vary.

those commands are virtually instantaneous and Charlie doesn’t even break a sweat.

Impossible - Try compressing 3 GB of software and then sending it up.

My entire New Remote Camera Robot repository is less than 27 megs in size, even including pictures, images, all five branches, and other assets.

A “Carl” chatbot based on the Bruce Wilcox ChatScript Engine

Probably not, but I tried to add the top level to be sure I got whatever is needed.

Or maybe I will make a copy of what I think I changed and blow the whole thing away. It wasn’t easy going so I back burner’d it and took too long to get back to it.

Blowing a repo is kinda’ extreme.

Maybe you can copy it somewhere and just clone over what you need to a fresh repo.

Blowing a repo is kinda’ extreme.

I made a backup then deleted the whole Carl/Examples/Chatbots/ChatScript folder on git,
did a git reset --hard origin/master, then started little by little recreating the folder and checking stuff in, till I have what I changed in Git. The BIG stuff, came from the author’s git and can theoretically be redownloaded to recreate. Eventually, I really would like to have “my copy” of the author’s knowledge rules in git, but for the time being I’m at least able to check my changes in without seeing:

Sure, like that wasn’t what got me in this situation in the first place.

Git is this wonderful thing that is complex beyond my ability to model. When it works at least.