Hi,
I am newbie here. I am trying to get the LED light working with Nodejs. I am using Pi3 with GroviPI kit.

I have tried the python code for Led blinking and it works fine but I want to do the same thing using nodejs but can’t get it to work so far.

I am connecting my led to D4 . I have also tried with Analog 1 but same issue.

Not sure which method I should use in nodejs.
When I try the below code

It shows the following 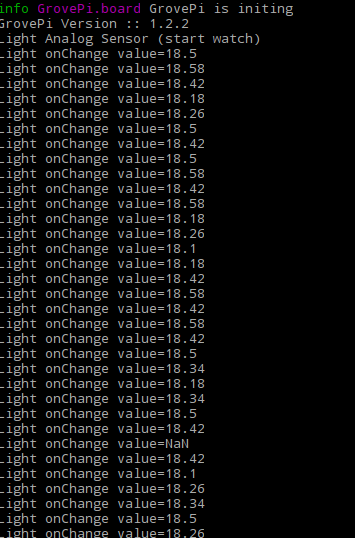 @hazem_salem sorry for being so late with this! Somehow I didn’t see this. Apologies,

Your code uses the light sensor which is a device that reads the amount of light in its environment. You would need to use a digital sensor in order to control a digital output device like an led.

I hope this helps

I just added an example to blink an LED
It will soon be part of Raspbian for Robots and you’ll be able to pull it in via DI Update.