I believe we “old timers around here” need to get with the ModRobotics program and use their latest GoPiGo3 OS unless we are focusing on ROS/ROS2 which have specific OS requirements.

(Reference this note from ModRob to an educator)

In that vein, I’m investing some time in figuring out how to use GoPiGo3 OS instead of “old R4R” images going forward.

I deleted the offending file:

and then ran (note not “apt-get”, maybe that running apt-get twice would act the same):

Quick answer:
the sudo apt issues are due to changes that the Raspberry Pi group implemented right after the release of GoPiGo OS 3.0.1
Sigh…

The upgrade needs a choice about the video4linux config file:

Should we reject or accept the new config? (I rejected for this first test)

stick with GoPiGo3 OS, but always keep the underlying OS packages up to date.

I guess that is an oxymoron - GoPiGo3 OS is designed for “without Internet”, but updating requires Internet.

@mitch.kremm , @cleoqc Perhaps the PiOS + /Dexter is the better route? I really don’t want to be a “special case user”.

I guess that is an oxymoron - GoPiGo3 OS is designed for “without Internet”, but updating requires Internet.

The GoPiGo OS is designed to operate in one of two possible modes:

The only suggestions I would make are:

Should we reject or accept the new config? (I rejected for this first test)

Unfortunately, that’s the way it is, and also unfortunately, none of us knows enough about the changes to even hazard a guess.

It’s like “Heads I win, tails yer’ hozed” and I’ll be damned if I know the correct answer.

can still be attached to a local network temporarily for updates, (if needed),

No, the documented update method is to flash the SDcard when MR releases an update. See “Update instructions for GoPiGo OS”

Perhaps the PiOS + /Dexter is the better route?

We are slowly moving away from Raspbian for Robots, favouring instead direct installs on Raspberry Pi OS, or using GoPiGo OS. Raspbian for Robots was created years ago because the official os at the time was sorely lacking. However this is no longer the case. Raspberry Pi OS now comes with a VNC server, a method to boot up the Pi completely headless, including on the first boot and an easy method to change the hostname.
You can install the full suite of GoPiGo libraries and tools on Raspberry Pi OS using the following commands:

@jimrh Any chance we can get you “off the pot typing on your phone” to plug some earphones into Charlie, and boot v3.0.1 to verify if only I have garbled audio, or it really is a problem? (Or Maybe it only happens on Pi3B+ and not Pi4s)

I haven’t been able to get a 64bit “Raspbian for Robots” working yet.

You gotta talk to “the boss” about that one.

She has a “honey-do” list where each item “only takes a few minutes” - but these are what I call “metric minutes”, where one metric minute is something like 15 to 30 times the length of an “imperial” minute.

I type on the phone while I am waiting when I chauffeur her around.

I usually only get to work on things after everyone else goes to bed.  And then I catch hell about why I don’t go to bed at a reasonable hour!

I will try to do that but I won’t guarantee the results are valid as it not a “plain-vanilla” install, being twisted and munged to allow for multiple operating systems booting.

I am going to try both routes for my students. They are currently using R4R, which is working fine after the 16 motor tick adjustment. I am not going to change horses on them in mid-gallop.
With the overhead of GoPiGo3 OS, I am probably going to go with Raspberry Pi OS + GoPiGo code installs. For my students, I would rather they worked with the PiOS, as that is what they will see going forward. Much more standards based pedagogical approach.

I’m convinced that is the best approach for “post R4R” uses.

I need to be able to install/update the latest OpenCV or update to the latest TensorFlow-lite without worrying about breaking the GoPiGo3 OS features.

I’m going to continue to always try new GoPiGo3 OS versions “as is” to function as an unofficial beta tester, and also test a constantly updated PiOS with Dexter/ModRobotics approved install/update scripts since this is the other approved use.

. . . can still be attached to a local network temporarily for updates, (if needed),

No, the documented update method is to flash the SDcard when MR releases an update. See “Update instructions for GoPiGo OS”

That applies to situations where the basic GoPiGo OS features are being used and the instructor may not know his way around a Linux clone.

For more advanced instructors, or more advanced situations, updating in situ has been recommended by Nicole.  (Unless I am loosing my mind, which isn’t that far-fetched.) 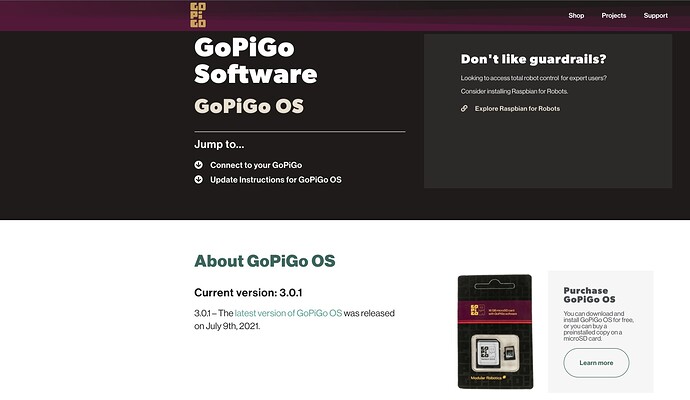 I wonder if I am a back number?  I should check.

Oh, and BTW, @cyclicalobsessive has a good point.

Oh, and BTW, @cyclicalobsessive has a good point.

Your point, not mine

Confirm the strange sounding audio on a Pi-4.

I remember there being a problem with pulse audio in the past, but I am not sure that this is the problem as other audio sources, like videos, play OK.

Maybe it’s the audio source itself?

Maybe it’s the audio source itself?

No, it might be some sort of kernel mismatch thing. I’ve solved it before by “back dating” the kernel after taking all the updates for buster. I thought maybe updating GoPiGo OS would fix it, but no cigars.

Then again there is the introduction of pulseaudio over ALSA in the recent PiOS and perhaps GoPiGo OS needs to remove that. Linux audio is a real can of worms.

MR will need to solve this time. @mitch.kremm

Up until now, my major development efforts have been confined to Raspbian for Robots, with the occasional side-trip to GoPiGo OS to check things out and/or confirm something.

I am now preparing to restart my test and development efforts, now that the major power supply project has ended.  (I still need to calibrate the current ranges, but that’s piddle once I get some standardized load resistors.)

My big question for you, (Nicole), is:

My gut feeling is to place the majority of my effort within GPGOS, and save R4R for the occasional verification issue.

However, I am not totally convinced that GPGOS is functionally equivalent to R4R and I am concerned about variations in the overall development environment.

For example:  Yesterday, while I was experimenting with GPGOS’s audio and the startup “barker” for the IP address, I played a few videos from a NAS (SMB) server I have, using both R4R and GPGOS, using VNC’s player.

Is this caused by other background processes running within GPGOS that aren’t running in R4R?  If that’s so, how do I isolate them to determine what processes, if any, are the culprit?

This both puzzles and concerns me, and makes me wonder if GPGOS is truly equivalent to R4R as a development environment.

I want to help, and I want to “get with the program” per se, but I’d really rather not waste valuable development time chasing red herrings caused by a non-standard environment.

A third option might be to transfer my flag to GPGOS and begin work there, not so much to finish my projects, (though that would be nice), but for the specific purpose of deliberately testing to disclose, and (hopefully) isolate discrepancies between the two operating systems so that GPGOS and R4R become truly equivalent.

Sorry I missed this thread… Very interesting thread though!

In theory GoPiGo OS and VNC viewer should give you almost the same experience than straight Raspberry Pi OS. There are two limitations.

I have no idea why audio would be garbled.