Moderate use of GoPiGo OS 3.0.1 maxes the capabilities of a Pi-3B?

Since you’re the acknowledged expert at performance and the Pi-3B, here’s a problem for you:

With three browser windows open, a couple of file-manager windows, a terminal window, and Thonny running, htop showed that I had maxed the default swap, had a five minute usage of over 13, and some operations took up to five minutes to complete.

It had gotten so bad that I had to use the push-button to regain control of the Pi, and that took over sixty seconds to be recognized and begin the forced shut-down.

Here are some screenshots of htop run as root:

While the system was trashed: 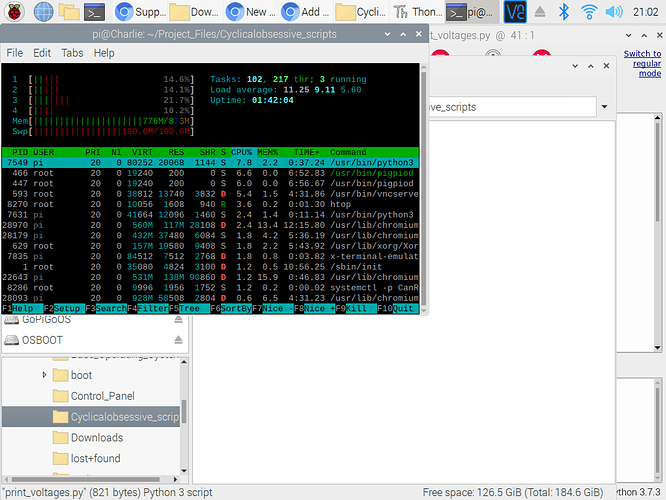 I tried to take a screen-shot of htop with the five-minute load at almost 14, but it didn’t take.

I could not run “throttle” or your python voltage script due to the extreme un-responsiveness of the system. 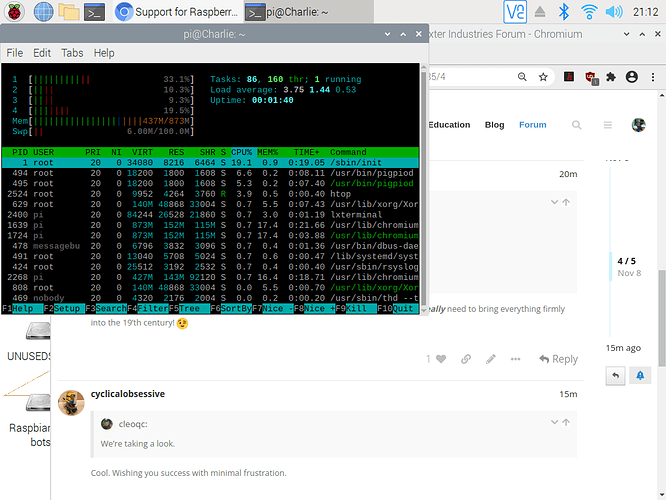 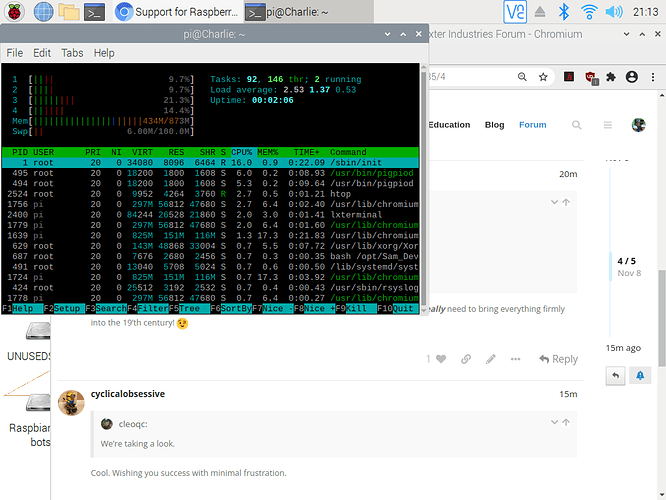 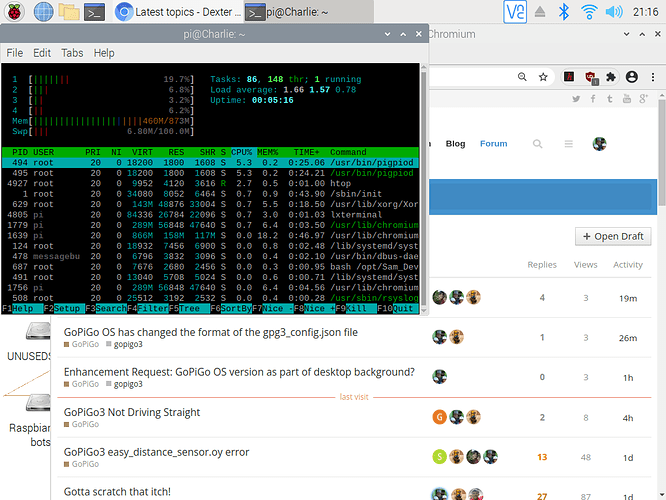 In each case, especially the first, you can see on the task bar exactly what I have going.

Even now, Chromium spontaneously resets the browser view to the forum home-page.

You seem to be able to run MAKE on an entire Linux distribution, run Carl in circles, communicate with a half-dozen of your ham buddies on the Pi, and try out TensorFlow without Carl even breaking a sweat.

I open a few windows, a couple of browser sessions, (monitoring the forum while researching other topics) and Charlie is on his knees gasping for air!

“Searching for emoji” within the DI forum while replying to Cleoqc’s thread, maxed out the Pi.
Viz.: 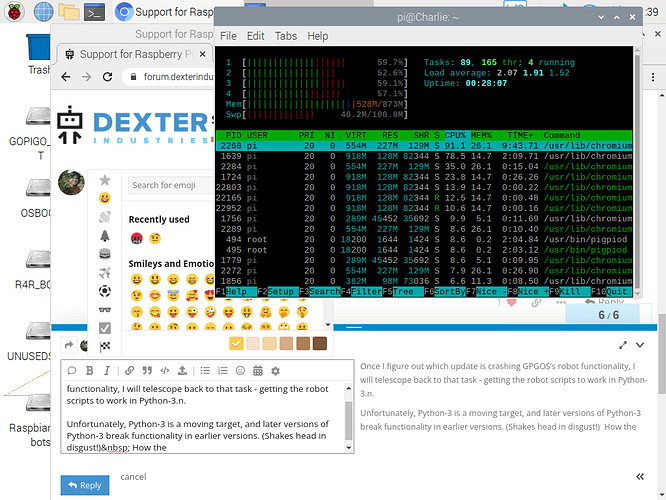 This is one of the reasons I ultimately migrated Charlie to the Pi-4.

I am suspecting strongly that the desktop applications are over-stressing the Pi’s capabilities, since I suspect that 99.99999% of your stuff is script and/or command line via SSH.

Note that this screen-shot, though selected while htop showed the Pi maxed, didn’t actually happen until about three seconds later.

You seem to be able to run MAKE on an entire Linux distribution, run Carl in circles, communicate with a half-dozen of your ham buddies on the Pi, and try out TensorFlow without Carl even breaking a sweat.

I open a few windows, a couple of browser sessions, (monitoring the forum while researching other topics) and Charlie is on his knees gasping for air!

I am so old school. The use case on all my Pi3B and Pi3B+ is usually three remote shells. One for editing, one for running stuff, and one to watch status. (The ROSbots, Dave and the Create3Pi systems, don’t even have a desktop installed.)

I do all browsing on my Mac (22 tabs open at the moment), and have 8 ssh shells open to the three currently active RPi. Also on my Mac is a ROS2 Ubuntu Desktop virtual machine running with another two shells, and the Create3 ROS2 Gazebo simulation.

TBH I have had my doubts that even the Pi4 can be a “desktop computer” even with 8GB and a 3A supply, so to hear that a Pi3 is brought to its knees when asked to impersonate a real computer does not surprise me and I don’t think there is any tuning that can abate the dissonance.

I was reading an article the other day that brought back memories of my time with IBM. IBM was big on Eclipse. In the article, the writer showed how he ran Eclipse on his desktop and edited files directly on the RPi, and had a remote console open in Eclipse for running the code. Obviously, when developing windowed applications for the RPi, having a second monitor showing the RPi desktop would be needed, but the IDE only used the desktop computer resources.

I am certain I would be more productive in a visual IDE, but I am too lazy to try VScode or revisit Eclipse. Its sort of a “feel most comfortable with assembly language” mentality that has plagued me for over forty-five years now.

However, I usually work with several files, or sets of files, and want a browser or two open.  (My “desktop” laptop has 22 tabs open in Firefox right this instant.) and the GUI is easier for me.

Also, I find that having a relatively large, (twenty-some-odd inches), monitor helps prevent the raging headaches I get when trying to look at the Pi’s desktop on my laptop - hence the HDMI cables.

Even though I do a fair percentage of my work in a terminal window, (or three or so!), even they are much easier to read on the big screen - and I can have more than one in front of me at a time.

), it’s easier to cut and paste this way.

Ultimately the correct answer is “This is how it works best for me.”

Running a “X” client on the Pi and a “X” server on my laptop, (it sounds backwards, but that’s how it is), that’s doing all the heavy graphical lifting, might make things easier than VNC, but that’s another project.

Trying to resolve this:

this!, and put the '4 back.  I’m going to rig up a Raspberry Pi-4 power adapter where I can get to it when doing REALLY heavy lifting on my 'bot.  (Like recompiling wxPython 4.xx from scratch!)  I plug it into the +5 port and I’m golden.

I get you, but I guess we have different workflows.  Which is good.  We’ll each see issues and errors that neither one of us could find working alone.

put the '4 back. I’m going to rig up a Raspberry Pi-4 power adapter

Seriously, we have different needs.

I’m seriously thrilled that you can get by on a 3.  You save mucho battery power, mucho headaches, and you have a lean, green, GoPiGo powered fightin’ machine!

I do much better with the GUI, and even with earlier, less bloated, versions of R4R, the lagging and stuttering frustrated me - especially when I tried remote dev with Visual Studio Code.
(P.S.  What can you tell me about Eclipse?)

I was faced with a choice:

Translation:
Charlie got the upgrade and I have been much happier.

Later on, I am going to see if a recent firmware change broke power management.

What can you tell me about Eclipse?

This page describes how to install and configure Eclipse to develop Python scripts remotely on Raspberry Pi. Since no specific Raspberry features are used, these instructions can be used for any remote Python development with Eclipse. The only...

having a relatively large, (twenty-some-odd inches), monitor helps prevent the raging headaches I get when trying to look at the Pi’s desktop on my laptop

Totally agree - using a laptop at home is an oxymoron for me. My computer (Mac Mini) is hidden away under the desk, with a 24" 4K monitor for photos and web browsing, and an LG 25" ultrawide for all my terminal windows. (Wearing progressive glasses limits the monitor vertical dimension that I can tolerate. I don’t want to have to look up at the ceiling in order to read text at the top of the monitor.) 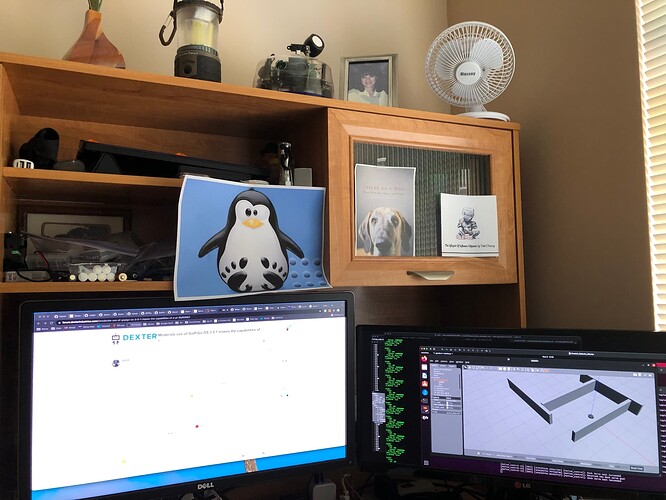