Hi, I’m new to the GOPIGO. I’ve assembled the GOPIGO and installed new batteries. When I first connected the battery pack I got no indication that the system had any power. No lights on the Raspberry pi or the GOPIGO board were light. However the batteries were immediately beginning to get warm. I’ve now disconnected the motors and tried again. The batteries are no longer getting warm but still no sign that it is getting power. I’ve made sure that the power button is switched on. Any thoughts or suggestions?

Hello u156531,
That does not sound good, it sounds like something shorted. When you first assembled the board, did the power light come on when you switched the power button on?

New batteries: new out of the box (fresh)? Were you able to check you had an 8-12V power coming out of the battery pack?

So does yours look like this? Looking at the picture in the lower right hand corner . . . 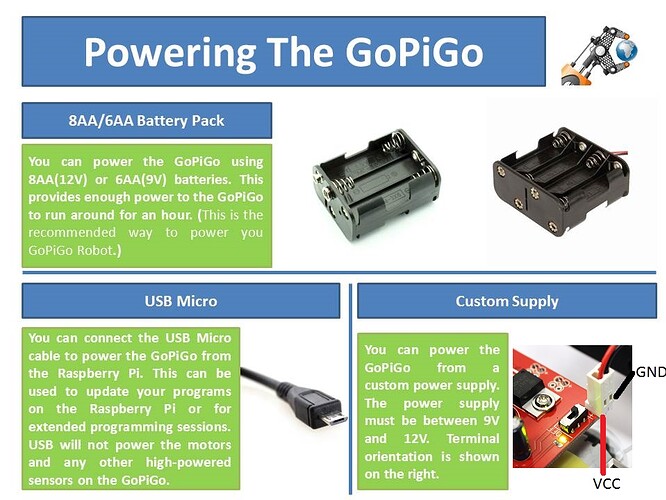 Is this the standard cable that came with the GoPiGo, or did you hack something else together?

John, You are correct, mine is reversed. So the black and red wires are reversed as well. I’m only using the parts as they came in the package. I tested the output of the battery pack and it shows about 12.3 volts. If I plug a powered USB cable into the Raspberry PI both the PI and the GOPIPGO board get power and the LEDS light up including the LED next to on/off switch. But if I just try the battery pack neither seems to have power. Looks like I’m going be returning this kit.

Hey u156531, where are you located? We will ship a replacement. I’d like to somehow get yours back so we can go over it with our QA/QC folks. That’s a terrible messup, I’m sorry.

John, I’ve sent my address info through the link you supplied.
Mark

Hey Mark, I don’t think we received it. Can you give it another shot? I haven’t seen anything come across.
John