It’s too early to say just how much work it would take to get the really fresh Okdo ROCK 4 SBC to work for GoPiGo, and I’m not hurting for challenges at the moment, but it might be possible: 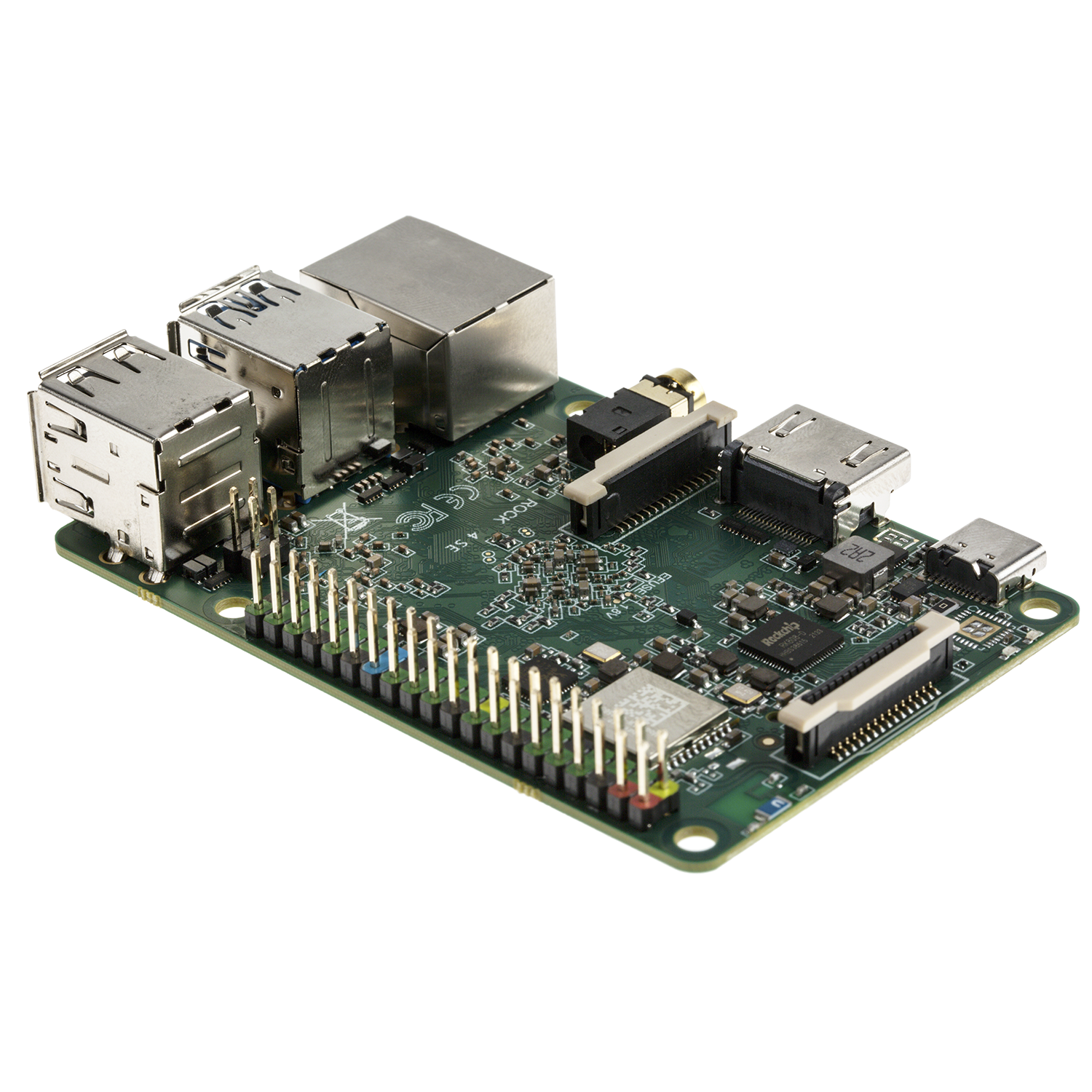 ROCK 4 SE is a reliable and high-performing single-board computer that offers class-leading performance and superior hardware as standard. This special edition board is based on a powerful Rockchip RK3399-T hexa-core processor, big.LITTLE™ Arm® Dual...

they claim “similar form factor” to the Pi. I didn’t scrutinize the pin out to see if it’s the same.
/K

Supposedly pin out compatible except for POE hat.

Will it run Raspbian?

Will it run Raspbian?

No only Ubuntu and Android.

They have Ubuntu 20.04 Server and Desktop images (with Xfce which is a “lightweight GUI” ) available, but supposedly “the coming soon Rock 5” version of the board will target the Pi4 Desktop capapabilities.

May not be able to make a GoPiGo3 anything with it. Physically the space below when mounted in the Gopigo3 may not work for heatsinks

Putting the processor on the bottom makes it difficult.

I had problems with the heatsink on the top. I had to trim the shroud and carefully use a razor knife on the spinning fan to shave enough away to prevent interference with the GoPiGo’s board above it.

It might be doable with a longer set of mounting studs but I don’t know if I will be able to get one to experiment with.

May not be able to make a GoPiGo3 anything with it. Physically the space below when mounted in the Gopigo3 may not work for heatsinks

There are some other reasons this board is not a “drop-in replacement” for a Raspberry Pi:

#'s 1 and 2 are potentially solvable.

I don’t know exactly how to do it, but it’s not “moon mission” complex.

#'s 1 and 2 are potentially solvable.

Sure, with cooperation of the board manufacturer and big investment of time by people smarter than me. BTW, to the suggestion to allow headless first-boot disable of IPv6 Radxa replied:

This is how we could never progress and sounds more like router and ISP issues. After all are you going to disable IPv6 on all your home devices that now show up in your router as a long list?

If you have a lot of devices in your home network you can start setting up VLAN to ease management, and build isolated networks. Manually setting known devices an address outside of DHCP pool is another way to do it, and could be done centrally form the router as well. In case of OpenWrt it also splits IPv4 DHCP leases from IPv6 leases, so there is no mixing.

If your ISP doesn’t provide IPv6 try disable IPv6 in your router. Otherwise something is wrong in your network configuration that IPv6 should just work.

“IPv6 should just work” … What are they smoking???

if clever people can get

Somehow I thought this situation was like the Intel-AMD PC situation of 50 years ago. AMD put out a motherboard and a set of drivers and “Voila!” DOS/Windows3.1 and all those ISA cards just worked. (If you could get the interrupts not to collide.)

However that attitude ignores the realities of today’s network environment.

Most of the network stacks on what are even bleeding edge systems and software are based on code written in the 70’s by Bell Labs or U of C Berkeley and many systems, even new ones, struggle with IPv6.

I don’t know where they live or what geniuses they have working for them, but asking people to build V-LANs or do other complex things when a simple “on/off” switch in their products will solve the problem is simply irresponsible product management and shows a callous disregard for the network realities of today’s users.

Feel free to write back and quote me.

I might not be sufficiently polite if I do it myself.

After all, are you going to disable IPv6 on all your home devices that now show up in your router as a long list?

Every one of them.

Every single device, every single managed switch, (that can be programmed), and every single router because all it takes is one device with a crappy IP stack to bring down your entire network.

All of this stuff may work well for you, and if it does you have my admiration - and please tell the rest of us exactly how you did it.

I have been working with advanced computer systems, hardware, and software since the time of the 8080/Z80 and 6502.

I have been a part of teams, and have worked with people who - literaly - “wrote the book” on many of the technologies you use today. These are people who have Tim O’Reilly’s private cell number and knew Bill Gates and Steve Jobs on a “come over for a beer” first-name basis, and they never arrived at a reasonably well working and generalized solution to the problem.

Others, equally talented, have also failed.

If YOU have discovered a simple, easily implemented and managed system that eliminates all of the IPv6 magic, smoke-and-mirrors, and sleight of hand, please publish it and provide the rest of the world access to your GitHub repo.

And then book tickets to Stockholm for the next Nobel Prize Awards.