Inviting @cleoqc and @mitch.kremm to the party, just in case they’re getting ready to rip Thonny outta their systems too!

If you use Thonny as I do to edit python files locally on your system, you will probably have noticed a glaring defect:

It turns out that this is a known bug, and even worse has been known for quite a while; AND  there’s even a fix documented on GitHub that has not bothered to make it into the code for several revisions - though everyone agrees it’s a problem.

(It is interesting that the person who documented the fix, Lurch, is the same “lurch” who is so instrumental and influential on the PINN forums.)

What’s even MORE interesting is that the fix is TRIVIALLY EASY, as in “My wife Svetlana could do this” easy.

No more crying in the beer - let’s do it!

(If that doesn’t work, substitute “leafpad” or whatever your text editor is for “mousepad”)

Or, do what I did.  Duplicate the line, comment out the old one and make the change in the copy. 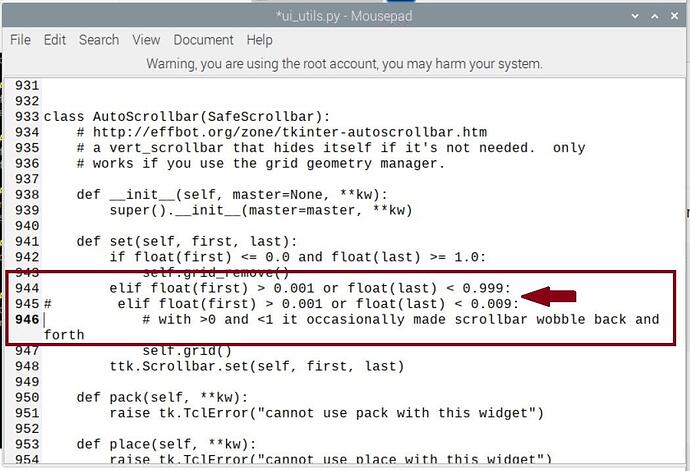 Save the file and restart Thonny if you have it open.

Badda-bing, Badda-boom!
You have a version with a working horizontal scroll bar!

Come on guys. . . My granddaughters can do this.  What’s the big hold-up?

Just in case anyone’s interested - my second ever pull request.

Everyone was talking about it but, (huh?!!), nobody  had bothered to open a pull request to actually implement the change.
(

So. . .  I did.  Maybe this will encourage someone to implement this in the next release?

Guess we’ll find out, won’t we. 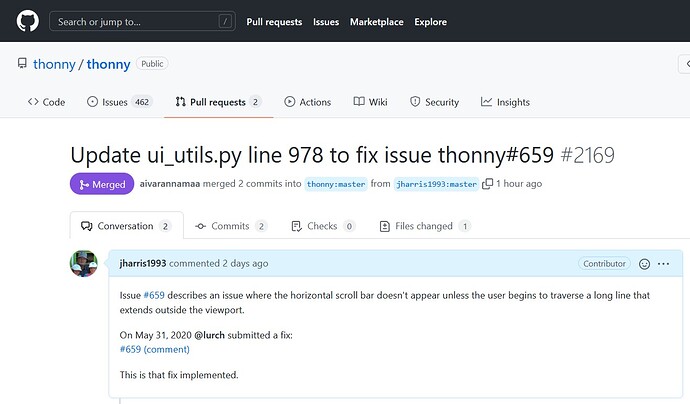 Apparently, my suspicion that it had “fallen through the cracks” was fully justified.

The push-comment from the maintainers was this:

Thank you for this push!

As I described in the issue, I was hoping to do a more proper fix, but never got there. In any case this fix is better than the current state.

The fix will be in the first beta of 4.0