I am migrating this setup (My project - with minecraft, arduberry ++) to Raspberry 2 from B+. The rest of the setup is the same. Now the servos are working for a little while, then stop. I have also noticed that with the Servo shield attached, the programmer can’t send sketches to arduberrry from RasPi. If I reboot it without the shield, it works fine. It seems to be the Adafruit servo shield who is the culprit, but why this now with a new RasPi model?

Hey sisomm, interesting project! I have been racking my brain to think about what might have changed going from the B+ to the 2. One issue might be, off the top of my head, the power supply. Are you using a 2A 5V USB power supply to power the Pi? You might want to double check that your Pi 2 is fully powered; the Pi2 might be drawing too much power. The Arduberry itself draws very little power.

The Pi2 might also be more susceptible to servo noise: does it quit working when the servos are powered up or are told to move?

THe screen went all noise at one time, but the Pi2 kept working, I was still logged in via SSH.

I suspected something to do with power that since the Arduberry stops responding after one of the big servos has moved. Or it responds, but the servos just don’t move.

The strange thing is that the servo shield is fed with it’s own power (1,5 A 5v) through the breadboard power supply. Here´s an image with the setup. I had four power supplies in swing just to check if there was enough juice. MIght the display have something to do with it? 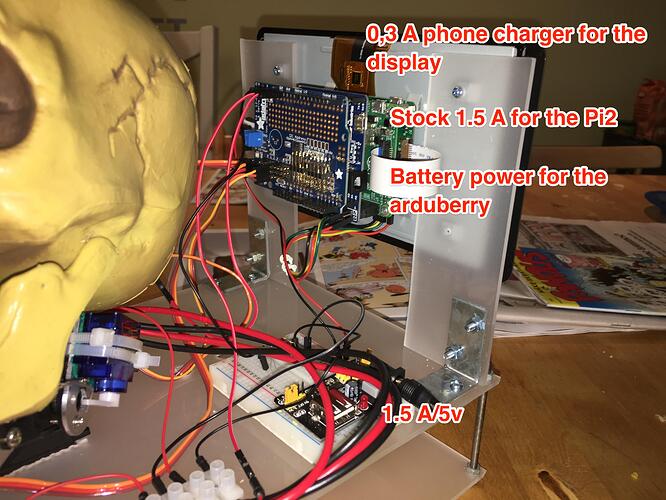 I visited an old friend of mine who is a wizard with pi’s and arduinos - and lecturer in electronics at a local polytechnic - and we measured power in all places, soldered a capacitor on the servo shield, and did whatever else we could to eliminate the problem. To no avail. The arduberry plainly dies in running the sketch. It sometimes helps to reset the arduberry.

The only thing we could make sense of was that one can run LED commands forever, but it crashes once one uses servos. Would it be possible for you to test the arduberry with the servo shield from Adafruit? I can try and replace the arduberry in the mean time

Hey sisomm, can you clarify a little bit:

The only thing we could make sense of was that one can run LED commands forever, but it crashes once one uses servos. Would it be possible for you to test the arduberry with the servo shield from Adafruit? I can try and replace the arduberry in the mean time

I’ll check with Karan, but I don’t think either of us have the Adafruit servo shield. Have you tried to run the servo shield alone on the Pi2? What were the results? Are you also in touch with Adafruit about the issue?

Update: I can run the sketch WITHOUT the servo shield intact - it will use the adafruit library happily… …

… and it freezes in execution now, too. So it seems to be a problem with the arduberry, not the combo servo shield/arduberry… Sorry for confusion. I can run an example sketch and see how it works, too

And yes, I have now made a post on the Adafruit forum https://forums.adafruit.com/viewtopic.php?f=31&t=89513

SOLVED! It’s a conflict with the SCL and SDA pins used to communicate with the official PI screen.

See how to connect the screen here: http://thepihut.com/blogs/raspberry-pi-tutorials/45295044-raspberry-pi-7-touch-screen-assembly-guide

Once I removed them, it worked like a charm. Now, what to do… I want to combine Arduberrry/Adafruit with a Pi2 and display…

Just jumping in here, maybe the following will be useful?

If you have a B+, a Pi2 or an A+ you need not connect the i2c GPIO wires as they are taken care of in the DSI ribbon connector.

I just received the official screen, but I haven’t opened the box yet. And I don’t own an Arduberry. So I’m not speaking from experience.

CleoQc: You are my hero! It solved everything…

Here’s a video of the end result: https://www.youtube.com/watch?v=o23ZX6JZyZY

Glad to hear the problem is solved. I had no idea you were stacking so much on top of the Pi there, the way you described it it sounded like you just had the Arduberry and servo shield on there. Good to know this sort of thing in the future!