I’m trying to do the ps3 controller project. When I typed in the first command it worked but when I went to type in the second command it said command not found.

Sorry don’t worry but I figured it out.

@Ryan : Can you answer the questions mentioned here. They’ll help us identify the problem you are having.

Which Pi are you using and have you paired it with the Pi via bluetooth.

I am using the pi 2 model b. I took a picture of what happened but I don’t know how to generate a test script. 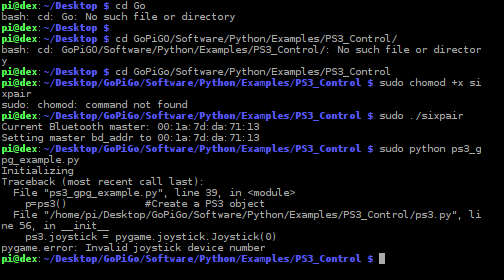 Here is the guide to generate a test log.

This is a little complex example, so might take a little effort to get it to work. What happens when you run sudo ./sixpair in the same folder as the example.

Hey here is the test log, and doesn’t the screen shot from my last reply show you what happen when I type sudo ./sixpair in that folder? The test log might not be there because it was taking forever to upload.
Uploading…

Sixpair seems to be working. Can you try out this tutorial here and see if you can read from the joystick by the end of the tutorial.

The log is still uploading for some reason. Can you try zipping it and uploading it again