RPi 1 Model B with GoPiGo 3

I just received the GoPiGo3 kit and was planning on using an old Pi 1 Model B I had lying around with it. It seems to have some compatibility problems with the kit. The main thing being that’s impossible to connect the GoPiGo board to the Raspberry pi because the Model B only has 26 pins and the GoPiGo board has a 40 pin connector. I would try it with just the 26 pins but the composite video output is in the way so it’s not possible to connect them.
Here’s a picture of what I have. 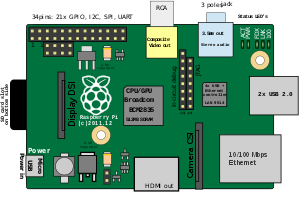 Would it be possible to get this Pi working with GoPiGo 3 by removing the composite video output so the GPIO connector could fit? Does it work with only the 26 pin GPIO?

Also I seem to be having trouble getting Dexter OS to boot on it. Only has red power light with no video output, although the official raspberry PI OS works fine.

@david-7822, do yourself a treat to a Pi3B non-plus. You will have no problems, and so much more potential.

do yourself a treat to a Pi3B non-plus. You will have no problems, and so much more potential.

@david-7822 - Seriously! Even a “plus” version is better than what you’re trying.

If you really want to die on that particular hill, try a Zero-W. It has all the pins and has the old version 1 architecture.  And for $5 a pop, not a bad investment. (Though, if you do get a Zero, get the OTG adapter too, and a Pi-Zero camera ribbon cable.)

As far as removing the connector is concerned - stay away. You’ll do more damage to the board by trying to rip a connector out of a multi-layer board than you’ll benefit from it.

@cyclicalobsessive’s not kidding. Now that the Pi-4’s are out, the 3’s are a great price and it’s more than worth the few centavos you’ll spend.

My advice is to get a Pi with WiFi built-in. It will save you Mucho Grief.

To be honest, we stopped supporting the Pi1 a long time ago. You’re living dangerously (not that anything bad would actually happen, but the risk of something not working is pretty high, plus it’s such a slow bootup! )

I’m a bit puzzled as to why DexterOS wouldn’t boot though. It’s running Stretch Lite which still supports the Pi 1.