I am getting this
“ImportError: cannot import name Mutex”

I had two RPI3, one works and one is not

following is what error:

Hello @brutus1214
The error was reported to us last night and we’re working on a fix.

Give me a min,
Cleo

You can run the following commands in a terminal.

Let me know if it fixes the issue, please
Cleo

Thank you Cleo for looking into this

I tried your instructions and all command was run successfully, but same issue.

Looking into this on my Saturday morning. Will report back

Would you mind redoing a DI Update? I think I have fixed it. I just need outside confirmation.
Also, please confirm, you’re on a GoPiGo3, and not a GoPiGo2, is that right?

Thank you for help again,

Thank you for help again,

I’m going to ask you to uninstall the GoPiGo2 packages this way:

After you do this, please try importing the easygopigo3 library again.

Also, this is kind of a duplicate of:

Hi @tktham, I would do the following: sudo pip3 uninstall gopigo After you run this command, give flask_server.py another shot and let me know if it starts working again. This will leave you with no API to interface with the old GoPiGo, but this is not the case as you have a GoPiGo3. And if it still doesn’t work, please leave here the output of pip3 list command. Thank you!

After yur instruction, gpg3 works.
Just curiosity, what causes this.

Also, thank you to Cleo too.
Thank you

Phew!
To answer you @brutus1214, we used to have the I2C_Mutex duplicated between the GoPiGo3 and the GoPiGo2, so we moved it to a centralized place. However, it seems that the old version was still on disk and still being picked up first, instead of the new one.
So removing the old libraries fixes the issue. I had asked you to remove the libraries for GoPiGo3, but forgot about GoPiGo2.

Also,
Thanks Cleo… but after the same error, and trying the same lines of code I still get a
“ImportError: cannot import name Mutex”.

This is happening when I am trying to run the BasicRobotControl *.py files.
I simply used the explorer login, to get the RPi desktop and am mere double clikcing the *.py files to test things out.

Nothing but errors thus far.

Thanks for the help!

This reply was meant to be to an upper comment.
After I got done with the rest of this thread, I followed the uninstall commands and get a different error. 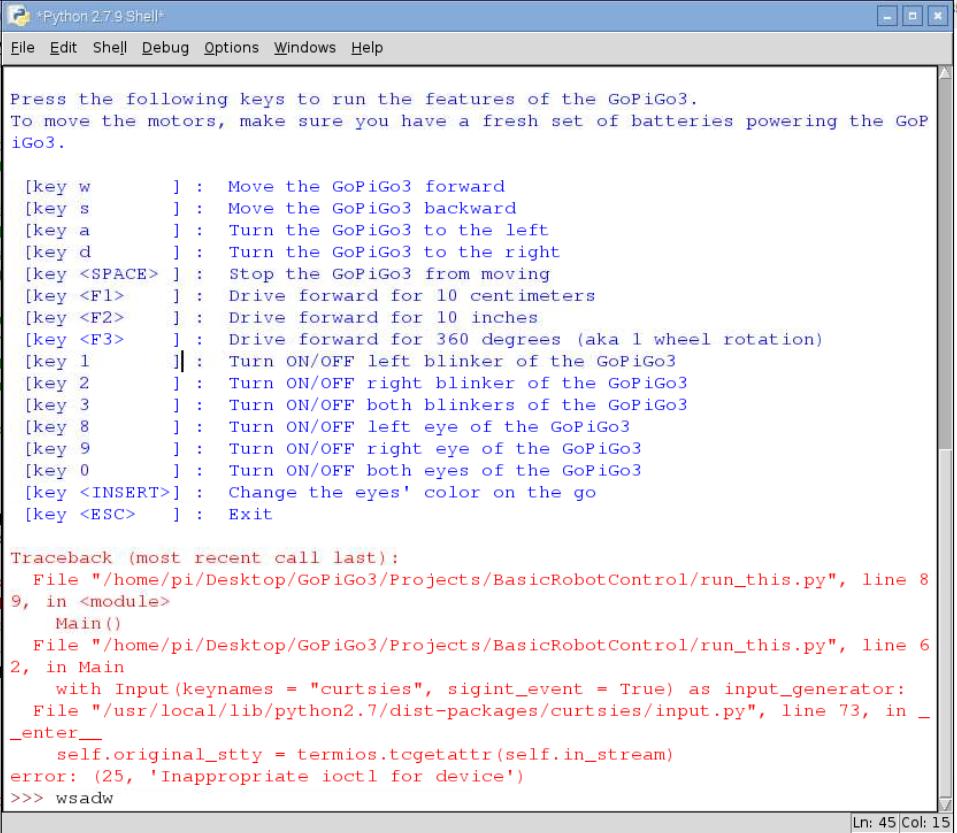 After attempting all the other scripts I get the same error.
I also pulled a script file from the DexterOS version and attempted to use it in the Raspbian for Robots OS (I have each loaded on separate SD cards) I get a similar error.

What I am starting to believe this is simply version of Python complaining.
This makes me think there should be a table, or some kind of a version check so that a user can know which pre-written script was built against which version of Python.

I am still learning but this is getting challenging.

I really would just like some simple blocks of code that can be loaded, tuned in python and eventually aggregated together into a larger bot type py file.

Looking forward to your suggestions.

This is a totally different and unrelated error.
This particular project uses a special library to handle keyboard input. This library does not work from within Idle. If you run the script from a terminal, it should work.

You will run it with this command:
python run_this.py