I recently re-discovered a toy I bought for the girls awhile back.

If you remember the 60’s, you will remember that there was a toy called a “Whee-lo” which was a wheel with a magnetic axel that ran back-and-forth on a pair of metal rails.

The Whee-lo or Magnet Space Wheel, is a toy that propels a plastic wheel along both sides of a metal track with magnets built into the wheel. As the track is tilted up and down, the wheel rolls the length of the track, top and bottom, and then again on the opposite side of the wire. In this way, the wheel always keeps in contact with the track, and can be continually propelled on its cyclical course. With proper timing, the wheel can be brought to a great speed. There have been many copies, but...

This is something similar, but the wheel runs on a closed circular guide and has a multi-color LED inside it for interesting visual effects. 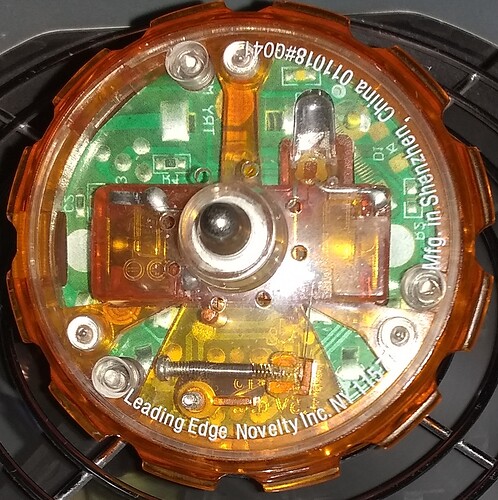 What does this have to do with the KISS rule, (otherwise known as don’t over-engineer what you don’t have to).

Part of the toy’s action is that a certain, pre-defined angular acceleration is supposed to start the LED showing its colors, but only while spinning.

How to do it?  A small accelerometer connected to a tiny processor?

If you look at the bottom of the picture, you will see a small spring with a bolt stuck in one end.  Near the bolt-head is the threaded shaft of another small bolt.

The spinning wheel causes the weight of the tiny bolt to flex the spring outward, eventually making contact with the other metal shaft and completing the LED’s power circuit.

Simple, and it works!

I had a whee-lo as a kid. I had forgotten about those
/K

I think everyone did at one time or another.

I remember them being sold by “Wham-O!” who sold a number of other toys under that brand name.

Oh yeah - Wham-O. I just looked. They still exist. But no Hula-hoops or Frisbees anymore. I loved Frisbees.
/K

And the Wham-O frisbee was the canonical version, IMHO. They flew great and true. The present crop of knock-offs are horrid.

Anecdote on not over-engineering:

This was found in a 1950’s, early 60’s issue of Electronic Technician, a trade magazine for TV repairmen [repair people of whatever gender you want.]

Two repair technicians were talking to a couple of design engineers from the local TV plant over coffee and donuts one day, complaining that some of the TV circuitry was incredibly over engineered and needlessly complex.

The engineers climbed up onto their dignity and challenged the two technicians to a “design-off”.  (OK Einstein, if you think you’re so smart - YOU do it!!)

They needed a piece of equipment to count sheets of metal as they were tossed onto a rack.  There was a convenient light that could be used to catch reflections from, but because there were overhead cranes, the mere absolute value of the light could not be used.

Each group was given an identical metal equipment cabinet, electric counter and associated hardware.

Prize: A full-up console TV with all the trimmings: radio, record changer, the works!
Cost: At least a month’s pay.

The bet:
If the engineers win, the technicians, (who also sell TVs), give it to them for free.
If they loose, they buy it for the full MSRP.

End of the month comes and they show off their circuits.

Engineers go first.
A worker flips sheets of metal into the bin and the engineer’s box accurately counts each one.

Circuit:
A photo-detector tube, a high-pass filter, a driver for the electric counter, and power supply.  Total: Six tubes and associated parts.

Their box dutifully counts each and every one.

Circuit:
A palm fan to catch the puff of air when the metal sheet settles in the rack, a helper spring for the fan, a micro-switch and two big bricks.

The engineers are agast!  Why the bricks?!!

So you wouldn’t know the box was empty when you lifted it up to gage its weight behind our backs!

Of course, if it was an ENGINEERING trade magazine, neither of the two technicians could wire up a light bulb with a pictorial diagram!