Updating Raspbian for Robots on the GrovePi

Howdy all, I have a couple Dex products but my question is more generalized. I have the “new” updating tool, but I am a little confused even tho I feel like I looked around.
Does running “update robot” without selecting a specific robot update all software? Since there are two buttons, I’m not certain which does what.
Along the same lines, will either update button add software? Inn other words, since PivotPi is new, will running an update add that software? If not, what’s the best way to add it to my GrovePi?
Lastly, does the update mechanism update the Raspian side along with the DI stuff or should I also run the standard update/upgrade routines as well?
If there’s already a doc somewhere that describes all this, I’d love a link to it!
Great work, BTW. Love your stuff!

OK, ran the Update Dexter Software button and watched the terminal window. Naturally, that answered all my questions.
I think, just for future questions, you might want to explain the difference in the buttons and what each will do. Actually, I’d still like to know what the drop-down and Update Robot button does. I’m guessing that it ONLY updates the robot software and leaves the Raspian updates to the main update button, but it’s my guess.

I’m glad that you’ve got through all of it.

Let’s have in front of our eyes the following screenshot. 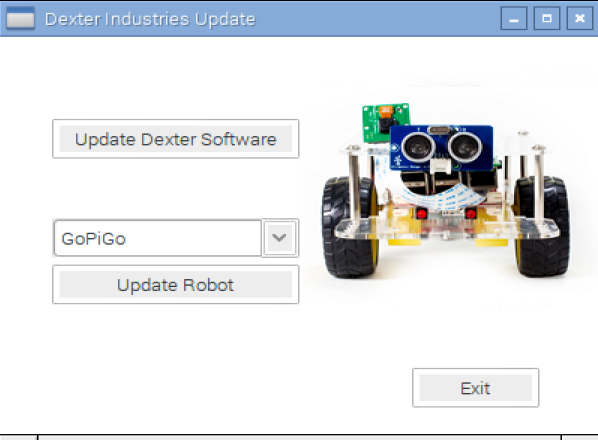 Update Dexter Software button is responsible for updating all the dependencies we need in order to program on the Raspberry Pi - that’s all. It requires internet connectivity in order to pull new changes.

Update Robot button updates just the board that’s connected to the Raspberry Pi. And the robot that’s updating is specified by the user in the drop-down menu. From the drop-down menu you can select any of the following platforms to be updated: GrovePi, GoPiGo & BrickPi.

You should follow this order rarely, because the firmware is the least updated. Generally, we bring changes for the Raspberry Pi and not for the board itself (the GrovePi, GoPiGo, etc).

Please let me know if there’s anything unclear. I’ll try to explain it the best I can.

Nope, excellent explanation. Except for that “you SHOULD follow this order rarely” part. I get the purpose (now) of each button, but I’m not entirely sure what that phrase I copied means.

One last thing - are there items, which, if added, break the R4R configuration? If I add OpenCV or a different code editor, could/should I expect things to break? I’m not savvy on just what has been customized to differ R4R from straight old Raspian.

Thanks again for your help!

Still got the questions about the R4R and adding software that I asked though.

As long as the I2C and SPI ports are left alone, I think you should be okay.
The GrovePi is being programmed through SPI while communication is done through I2C.

In reality, you’ll never know if some routine is going to break something else.
There may be moments when a routine will interfere with another routine you’d never have thought that’s possible to happen.

If things wouldn’t break out of nowhere, then the term debugging wouldn’t exist.

My suggestion is to start small. Small increments is better than adding big changes at once.

So, it’s recommended to add small functionalities to your project and see how it goes.

Also, we’re curious to hear what kind of project you want to do that includes OpenCV.
It would be awesome if you could share more with us.

My questions about updates/installs breaking things are the product of my ignorance when it comes to both Linux in general and the R4R install in particular. I was assuming that some or many of the standard installation pieces of Raspian were altered by the R4R modification. I’m now seeing that’s really not the case. I’ve read that some installs - like including support for RGBD cameras or certain libraries or functionality - require a special kernel version. My assumption was that doing standard update/upgrade maintenance will break that.

As far as one thing breaking something else, I’ve experienced that as a programmer many times. My group supported thousands of machines with hundreds of configurations around the world. I got around most of that through very strictly enforced standards. And still experienced individual failures - hardware and software.

So I wasn’t expecting no problems!