I too have significant anxiety about the post-merger fate of the GoPiGo3.

The first encouraging public action of Modular Robotics actually supporting the GoPiGo3, (that I have seen outside of this forum), appeared last month as an educators lesson plan: “GoPiGo Robot Characters” on the Modular Robotics “Hour of Code” Blog 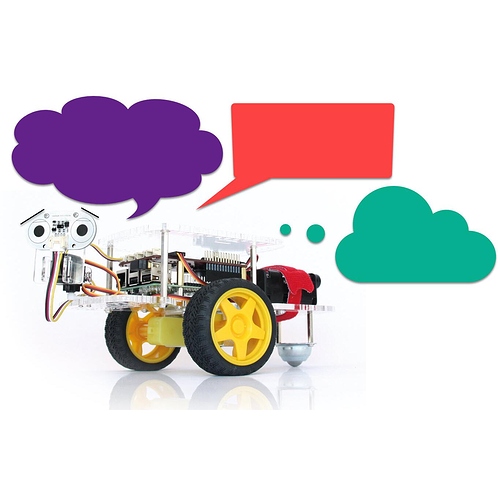 half full vs half empty

Well, calculating the ratio of mentions (mentions/unit time), my guess is that the glass is about 1/10th full at this point. It’s just a matter of time to see if the water is rising or falling in the glass.

It makes sense from the point of view that Modular Robotics entire culture is based on these little “cublet” thingies. I’m not sure how there’s going to be a “meeting of the minds” here, since cubelets and (comparatively) large robots don’t have many common intersection points. IOW, I’m not sure how you could make them work together as they exist in two separate domains of expertise. Though, maybe if I get my hands on a dozen or so. . . .

Modular Robotics entire culture is based on these little “cublet” thingies

That is exactly why they bought DI - for the older educational market. The Raspberry Pi is still very strong value for the price, and the micro-bit even more so for the intermediate grades.

MR+DI pulls together broad coverage, experience, and potential, so the future of an inexpensive capable Raspberry Pi processor, Raspbian/Linux OS, with a programmable microcontroller physical robot layer, supporting lots of 3rd party sensors, that comes in somewhat easy-to-assemble kit form should continue to meet the higher grades’ needs. (It’s not cute though, and it’s not new - both of which may be important for strong success. I don’t know how to judge that.)

History would suggest that it is very, very hard to be successful long term selling robots, but many organizations have “made it” selling education. Hopefully, the GoPiGo will get taken along for a success story.

That is exactly why they bought DI - for the older educational market.

And who said the GoPiGo isn’t cute? Them’s fightin’ words!!

OK, maybe the GPG with the ultrasonic sensor isn’t cute - it looks like something from a '50’s monster movie - but the distance sensor? Ahhh!

I was looking to buy a 'bot, and I was looking, really looking, at the competition and had just about settled on a nice 'bot by SparkFun when I saw the GoPiGo. . . It may be silly and it may be stupid, but darn if those googly eyes didn’t do the trick.

The same with the GiggleBot. When my granddaughters saw their 'bots, the first thing they asked is if they can have “eyes” too, just like mine!

I’m going to mod them with the distance sensor, and a servo that can attach to a pen or pencil stuck through the center hole to give a “pen up - pen down” feature - let’s hear it for turtle graphics!

p.s. A big white sheet of Marlite and some dry-erase markers would be a hoot with the GiggleBots.

The thing I really liked about the GoPiGo is that it’s a real 'bot - a really capable 'bot, that can do real things, (not just crawl around and destroy other 'bots by remote control), and being based on the 'Pi, it has some real chops to work with.

I was, and still am, convinced that this is something I can grow into instead of growing out of it. I can seriously see someone using a GoPiGo or few as part of a doctoral dissertation. The micro:bit? Maybe not.