Where were these opportunities when I was growing up? 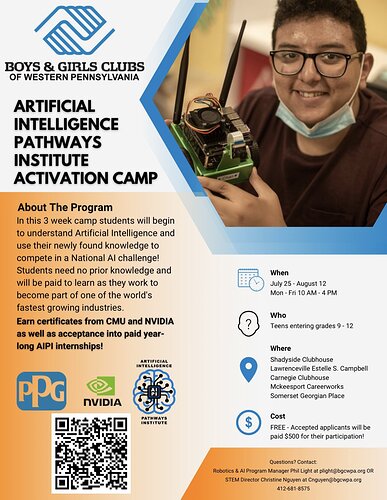 I was lucky if I found good stuff scrounging trash cans, dumpsters and the local dumps.  Getting paid?  Час!  (Pronounced “Shazz!” and roughly translates to “don’t hold your breath” and/or “You ARE getting better drugs than I am!”)

On the contrary, I had to bust my [donkey] to earn the money to get the stuff I wanted to mess with.

As far as clubs were concerned, the “big” club where I lived was 4-H. (Of course, the Explorer post located at the GE television plant in the next town over was a hot smokin’ weapon!)

Seriously though, I’m glad to see stuff like this happen.

There are more “Coder Dojo’s” in just the city of London than there are in the entire United States!

Moscow, (Russia), hosts an annual science competition named something like “Science Stars” where students from elementary, junior high and high schools from all over the Moscow Region can compete for fame, glory and prizes.

The winner of the Moscow competition goes on to compete with winners from other regions of Russia, (like St. Petersburg, Volgograd, and other cities all across Russia at a HUGE  “Science Olynpics” held at the Moscow Institute of Science and Technology, where the winners and runner-ups get prizes, fame, recognition, and all-expenses-paid scholarships to the Moscow Institute - a way of filtering out the best and brightest - who then go on to big jobs in science and industry.

Another inducement:
If you place above a certain level at this competition, (you don’t have to win, just be within the top 80 or 90%), and you get an automatic, permanent, exemption from being drafted if you go to college.  If you DO decide to join after graduating college, you start as a 1st Lieutenant, (as opposed to a 2nd lieutenant or a technical sergeant), in an appropriate technical battalion.

If your scores were more exceptional, you get higher rank and placed in special “scientific” units of the military where you are essentially working in places like Laurence-Livermore, Brookhaven National Laboratories, Oak Ridge, or Los Alamos where you were working with the brightest and best scientists around doing all kinds of seriously fun stuff.  (I did a summer internship at BNL which was near where I lived in high school, and it was a drool-fest to end all drool-fests!)

The US is, unfortunately, spending more time worrying about which foreign country is doing what instead of stimulating science and education and the sad result is what we see today. . .

I did a summer internship at BNL

Working with people who not only had a clue, but knew everyone else had a clue too was a dream come true. . .

Side note that has nothing to do with anything. . .

The research project I was working on there was trying to find out why specially made Inconel piping was deteriorating faster than anticipated when used in a high-temperature hard radiation nuclear reactor environment.  The then president of the US, Nixon, decided that this research “wasn’t really necessary” and cut funding which put the kibosh on everything.

Karma:
About five years later, a reactor of the exact same type that we were researching, (manufactured by GE who was providing part of the funding), failed spectacularly in precisely the way we had predicted it would unless we discovered what the failure modality was.

I did a summer internship at BNL

The aerospace firm I worked for was one of them as the stakes were just too high for the political back-biting.  (And it was known that I had a “zero tolerance” B.S. policy.  My famous qoute:  “You want to play games, go on TV.”)

One of the catalytic events was the Avianca Flight 52 crash that occurred on a Friday evening just after I had been butt-reamed by my boss for insisting that people take their jobs seriously.  (We manufactured fuel gauging systems for commercial aircraft)

There were people working with me who treated the job like a joke, like it didn’t really matter.  OK, maybe I overreacted, but, (IMHO), a commercial airliner at 40,000 feet “running out of gas” is a Bad Thing and I kinda’ flipped at the casual attitude toward quality and work ethic.

My boss gave me a public a… (oops!), butt reaming and promised to “take care of me” on the following Monday.  Four hours later, Avianca Flight 52 lay in ruins outside of Cove Neck on Long Island, and there were bodies all over the place.

That next Monday, my boss had a stand-up meeting for everyone, (not just my group), holding a copy of that weekend’s Long Island Newsday with the crash all over the front page for everyone to see.  He publicly apologized to me and “suggested” that this was the time to “tighten ship” about how we viewed our jobs.

I gave him total props for knowing when to apologize, and there was a massive turn-around in how people viewed the importance of what they did.