A New Year - a New Makeover for Charlie!

Greetings from Charlie and I. We both hope you had a wonderful new year’s holiday! 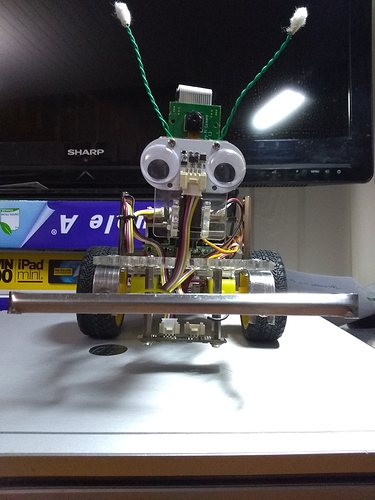 This is the “new” Charlie, all ready for the new year and new adventures.

For New Year’s, (That’s how they do it in Russia, their “winter celebration” is on New Year’s Day.), Charlie received several nice presents: 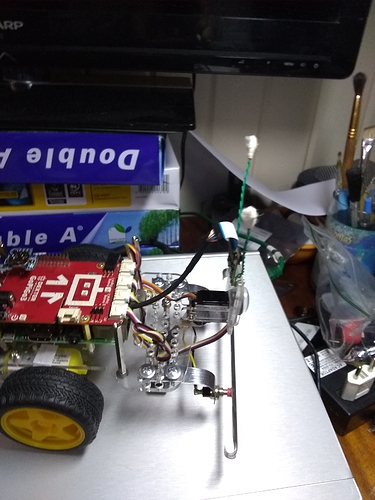 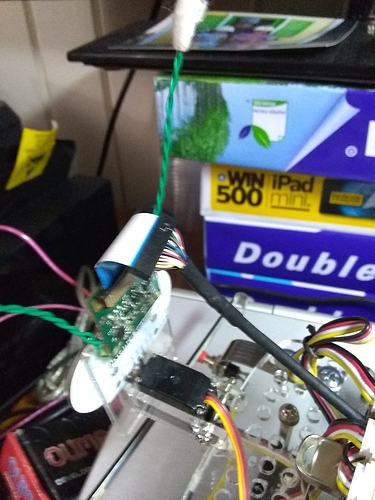 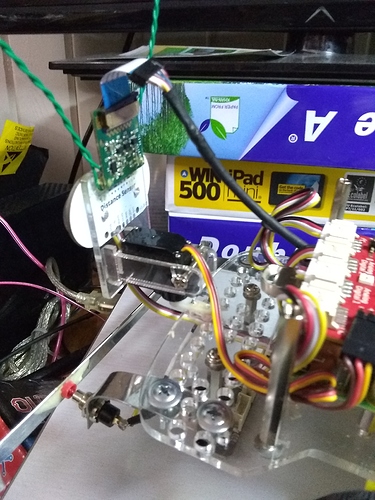 This cable comes from a vendor in the UK who makes them specially to-order in whatever length you wish, though at about 25£ or so each, plus shipping, they’re not cheap. The advantage is that they’re better able to take the swiveling motion required by the camera being placed on Charlies head. 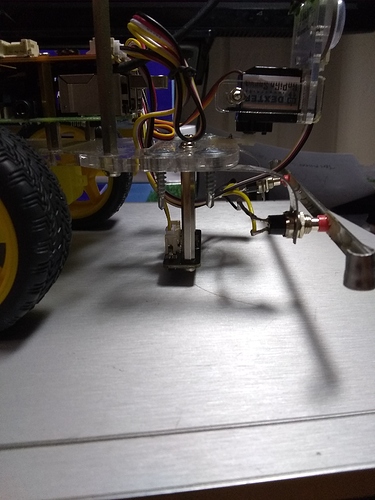 Here’s the line sensor mounted underneath his front, just behind the bumper. You can also see it, (sort-of), in his first picture down near the bottom. Though I’ve successfully calibrated it and verified functionality, I have not had an opportunity to actually try it in the real world as I would need a large roll of white paper about 2 meters wide and about six or seven meters long to lay the track on. Of course, I could lay black electrical tape all over our wooden floor, allowing Charlie to wander around following the line, but my wife would absolutely KILL me! 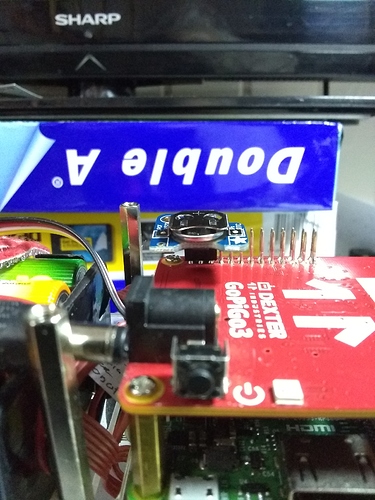 Here you can see it near the back left. 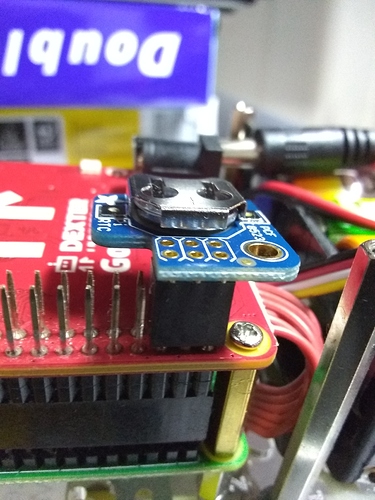 Here is a closer view. It plugs right in and, (barely!), fits under the top plastic canopy.

They have a really good tutorial on how to get this little beastie set up and running in Raspbian. My next project is to figure out how to get it running in Dexter OS and Cinch. @cleoqc says “no can do!”, but - as I’ve said before - the best and fastest way to get me to latch onto something like a bulldog is to tell me it can’t be done! 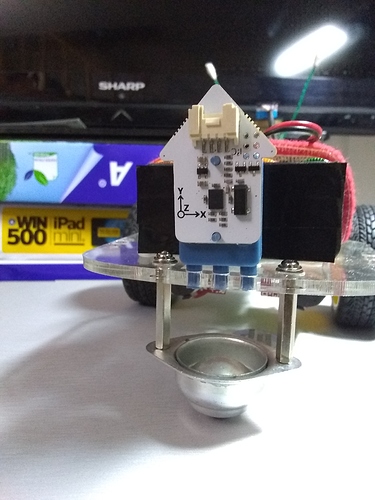 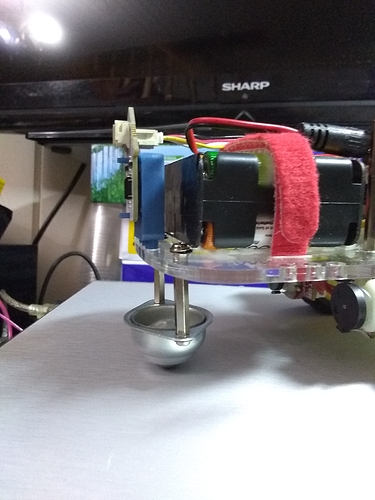 Here you can see where I’ve mounted it right behind Charlie’s battery pack.

I have also tried calibrating it and verifying functionality, but have not put it to real use yet.

One thing I have noticed, (at least in Dexter OS/Blockly), is that commands to turn a specific angular amount do not inherit the precision of the IMU. (i.e. a 90° turn isn’t a 90° via the IMU turn, but an “approximate” 90 degrees.) IMHO, the entire idea of installing an IMU is to improve positional accuracy, so it makes sense for angular measurements to inherit these measurements from the IMU. (Enhancement hint! hint!)

Just had a thought. . . I wonder if the turn angle “x” block will take a computed value? (i.e. turn(current_heading) ± some angular amount) I’ll have to try that. Though, having the bloxter blocks inherit the precision of the IMU isn’t a bad idea. Maybe this can be triggered by a special “enabling” block near the beginning of the beginning of the code?

Unfortunately there was one hiccup: In the process of installing everything - and mounting the camera on Charlie’s head - I accidentally snagged the bumper and ripped the plunger out of one of the switches.

Though it doesn’t affect the basic tests of Charlie’s new upgrades, it does mean I’m going to have to remove the bumper, unsolder all the wires, remove the offending switch, epoxy on a new one, and reassemble everything. Which, I might add, is a Royal Pain.

I’m going to have to find some kind of quick-disconnect for Charlie’s bumper. Push connectors that would fit over the solder-tabs on the switches would be great too.

Can I use the updated camera - as a background process, independent of everything else Charlie is doing - to broadcast real-time video to me so I can see where he is?

then point your browser to <charlies_IP>:5000

and you get realtime view 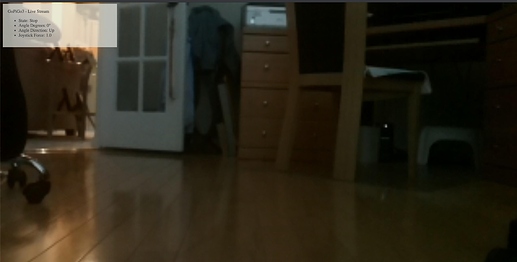 improve positional accuracy, so it makes sense for angular measurements to inherit these measurements from the IMU. (Enhancement hint! hint!)

Yes - “The proof is left as an exercise to the user” heard daily from every engineering prof.

BTW, your flat bumper just happens to be a better idea than you may have intended…

I had a robot Cye, which used driving into the walls/baseboards of a corner right beside its home base. The flat front of Cye would align to the first wall, and the bot would reset its 0 heading and 0 “y” axis. Next, the bot would back up an appropriate distance, turn what it thought is 90 degrees and drive into the other corner wall, resetting its 0 “x” axis and double checking the 90 degrees encoder accuracy. Lastly, it would drive very accurately to its nearby 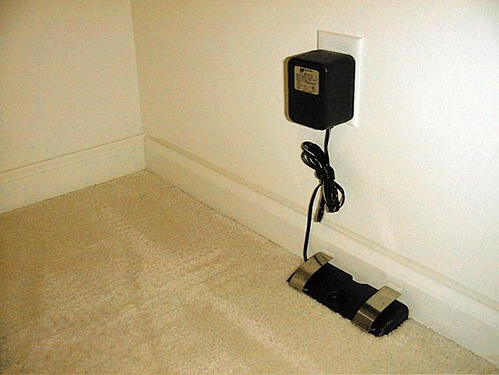 .
Your flat bumper will give you a great reference for setting the 0 offsets for the IMU. I have not gotten around to that yet, in part because Carl doesn’t have a flat surface to drive hard against to gain a reference. My plan has been to use the lines in the flooring with the PiCam but this will be much more complicated than banging Carl’s toes against a wall hard enough to “knock him straight”