I’m using an “old” brickpi (first generation) on my new raspberry pi 3 B.
I am in trouble because the only thing I can obtain from the brickpi is “no spi response”.
Strange thing: I was able to upgrade the firmware with Brickpi3 version, and it seems to be well accepted.

Is this firmware compliant with this version of the brickpi ? If not where could I take the good one ?

Ok, the issue is your trying to use the BrickPi3 python drivers with it! That will not work. What you need to do is use the ones for the old one. To do that see if you can find a folder on your pi called BrickPi or BrickPi+. If it doesn’t exist that’s OK.
Just follow these instructions. That should work but let me know if otherwise.

Also, please note that previous versions (Before the BrickPi3) can not be done through Raspbian for Robots. You should not be able to upgrade the firmware with BrickPi3 firmware.

So do you think that when I upgrade the firmware with brickpi3 version it is not really performed ? I had a “Ok” status after this operation…That was the only instant that the brickpi seems alive… lighting the blue leds…

Thanks to you graykevinb !!! I followed your instructions and it works !
Could you explain to me what was the problem ? The first time I tried the BrickPi+ scripts it was not working…
And I thought I was able to configure spi and disable BT.

So about the firmware. The BrickPi3 uses a completely different microprocessor. So when you attempted to update the firmware for some reason it said it updated, but it actually couldn’t have. I’m not sure how it checks if the update was successful or not. Anyways you did not update your BrickPi to BrickPi3 firmware. You can however update it to a firmware version that will work with your BrickPi. However you will not be able to use the Normal Update firmware GUI. It will require extra hardware.
For more info on updating the older BrickPi look here.

I would suggest though asking someone from Dexter Ind if you want to update. Not sure if the BrickPi+ firmware is compatible.

If you have a BrickPi+ connected (or nothing), and in DI Update you manually select BrickPi3 and try to update the Firmware, this is probably what you see: 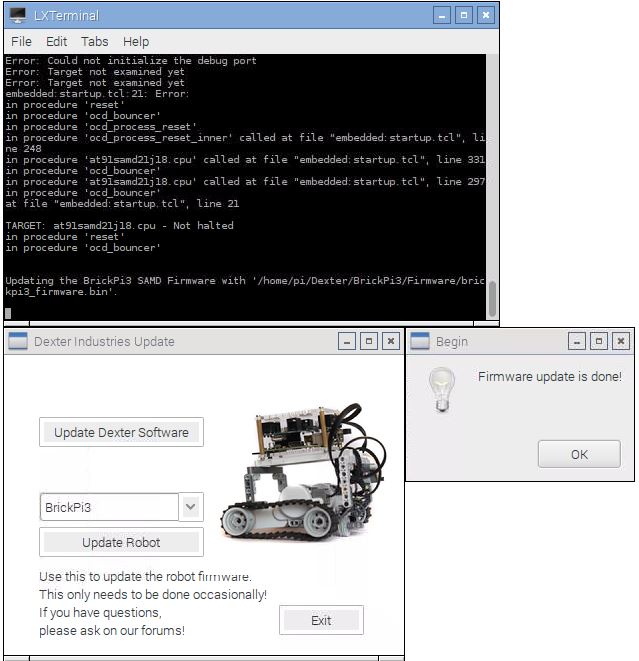 You can see that there are errors in the terminal window (since it’s not actually able to communicate with the BrickPi3). The “Firmware update is done!” popup doesn’t check to see if the update was successful, so it will show the same message whether or not the BrickPi3 was actually updated.

I also agree that it is clearly visible in the terminal window that errors had happend.
Nonetheless I think that the “Firmware update is done!” popup is highly ambiguous, and I actually would expect more a message like “Firmware update failed!” in case it had failed…

Thanks for the feedback. It’s on the list of improvements to be made.

I’d like to add that it saying what errors happened in the gui would also be nice.

This topic was automatically closed after 34 hours. New replies are no longer allowed.