Can gopigo reach the internet during autonomous runtime?

Is it possible to write a python robot app (on Dexter software) that can reach a web service on the internet?

reach a web service on the internet?

When you say “autonomous runtime” will the bot be connected to your router via WiFi?

If by “Dexter Software” you are referring to Raspbian For Robots and not DexterOS, the answer: no problem if connected to your router via WiFi and your router has Internet access.

How to access various Web Services in Python - PythonForBeginners.com

Overview A very good way of learning Python is trying to work with various Web Services API’s. How do I access web services such as Youtube, Vimeo, Twitter? In order to answer that, we will first have to get some knowledge about API’s, JSON, Data...

Also there are examples of using the Google AI APIs (vision, speech are the two most often written up) but they require a bit more signup and configuration. They work very well from the GoPiGo3 (if you are not trying for a “self reliant autonomous robot”. )

I have set a goal to maximize the use of the GoPiGo3 and Raspberry Pi abilities, and only allow off-platform resource use as an “optional to robot functionality”, so while I have tested the Google Vision and Speech APIs from my bot, I am trying not to let my bot get addicted to Google.

This DI tutorial might need some updating, since Google changed the API authentication method since it was written, but it gives an idea of what is possible: 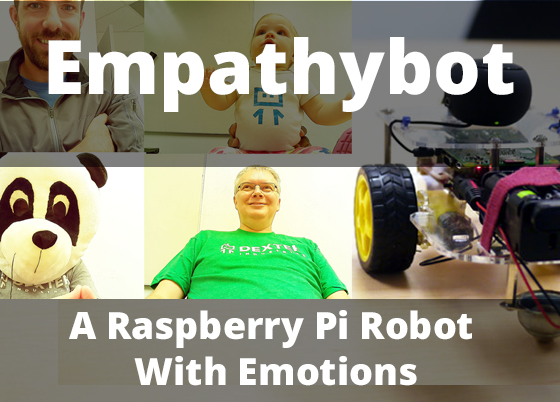 Empathybot is the Robot That Reads Emotions With the Raspberry Pi

In this tutorial we build a robot that reads emotions with the Raspberry Pi. Empathybot uses Google Cloud Vision to read human faces and judge emotion.

Here is another using Google Cloud Vision to read text on the wall:

Just, a quick demo that show my result of what Gopigo and Google Cloud API can do together: In this demo, Gopigo is invoking Google Cloud Vision and Google Cloud Text-to-Speech API. I had on top of my mind to have a helper for managing Alexa

Thanks, I mean that the robot will be able to access a wifi access point. We are running Dexter software, not Raspbian. We are willing to switch to Raspbian but honestly I find the Dexter site confusing in that I can’t find an explanation of the clear trade-off’s between choosing Dexter vs Raspbian for Robots.

explanation of the clear trade-off’s between choosing Dexter vs Raspbian for Robots.

DexterOS, (the download pg confuses folks by having a Raspbian For Robots header, but DexterOS is not Raspbian For Robots), is for beginners, for educational settings where Internet connectivity is awkward/forbidden, and offers a access point, and zero OS access.

Raspbian For Robots is created by Dexter Industries (is Dexter software), over top of Raspbian Stretch (for all RPi versions), or Raspbian Buster (less mature but required for RPi 4).

This graphic is old (Cinch OS is no longer offered) but lays out the differences:

I found a very interesting article that has an EXCELLENT chart that details the differences between the various operating systems that work with the GoPiGo. @cleoqc has come through and produced this masterful table: [OS_Differences] Wow! That answers questions I didn’t even know I needed to ask! Thanks Hugely. Jim “JR”

Here is my take on the OS choices for a GoPiGo3: (Raspbian For Robots is my preference) 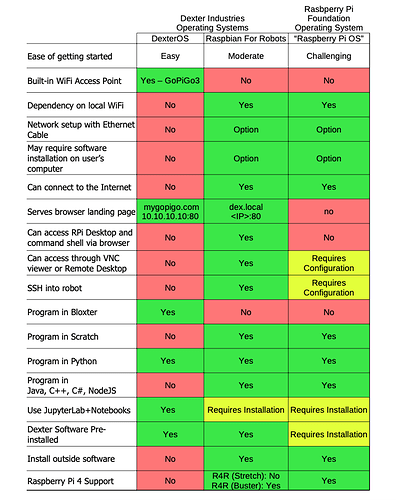 this chart … Mind if I make them official?

Here is the source file in case you need to correct or improve (rename back to .ods):

One note: The “dex.local” assumes that the user hasn’t changed the 'bot’s hostname. If the hostname has been changed, you need to replace “dex” with the updated hostname.