I have been running my GoPiGo3 for 45 hours over the prior 12 days, and just today saw my first
5v throttling event.

I traced it to some executions of my center.py routine which centers both tilt and pan SG90 mini-servos. There is a possible overlap in the durations of re-positioning the servos, which apparently can cause the 5v supply to sag below the processor “low voltage” threshold.

With this delay, and both servos rotated 90 degrees from center, the rotation of the first servo has started, but not completed by the time the second servo is commanded to center. I am not seeing another 5v throttle event. Perhaps two “startup” current draws is too much, but one running and one starting is acceptable.

I’ve got 2 questions for you:

Both servos rotate freely, but:

When I put a 0.2s delay before starting the second servo moving to center, the problem went away. 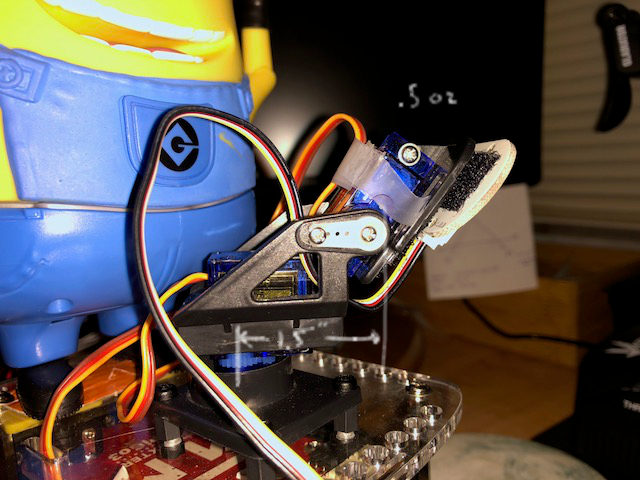 No. I am using 8 individual NiMH AA cells which seem to yield a little over 2100mAh to the voltage cliff. (Six of my cells that test out a little above 2200mAh and two cells that test around 2000mAh. )

(Each cell was tested individually in a BC-3000 Universal Intelligent Charger at 500mA charge rate with negative-deltaV peak charge detection, timed 500mA discharge to 0.9v, then charged again to full.)

Before this particular run, I did not recharge the pack. I had used an hour of charge the night before and Carl was estimating 4-1/2 hours remained (9.6v at power up).

In practice, I don’t let the cells fall below 20% remaining charge, which is at 8.5v or 1.0625v/cell. This minimizes weak cell reversals and gives about five years of drain-charge cycles.

Well, I haven’t had that happen on mine though - that’s when I’m using 2 servos at the same time. I’ve had that happen when I wasn’t using our battery, but a portable one I had around.

Anyway, @Matt, can you take a look at this? What do you think? What specs does our battery have?