Got IMU? Get "Heading Bot"

Got the DI IMU on your GoPiGo3? Get HEADING BOT!

heading_robot.py uses the Dexter Industries Inertial Measurement Unit (BNO055 chip)
in IMUPLUS mode (Fusion from Gyros and Accelerometers only, no magnetometers) to
orient the GoPiGo3 robot with respect to the orientation when the program is started as 0 degrees. 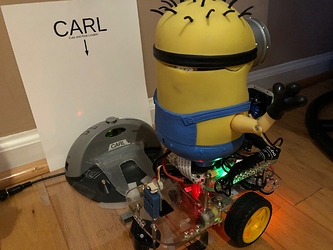 These classes implement features above the DI IMU standard interface: 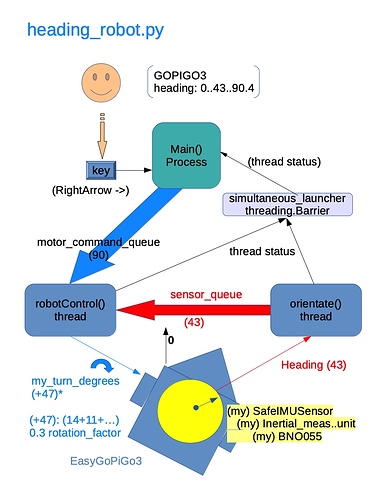 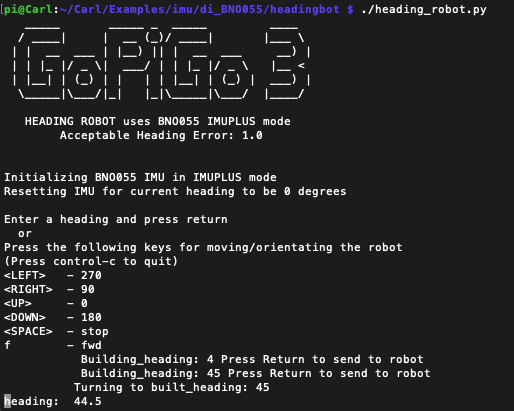 What is true? True North? Not interested. You could use NDOF mode and calibrate, and add your declination - you’re on your own. You could also use DI compass_bot.

Just thought of another way - point him to your true North before you start heading_bot.py

Like I told you before - just bang Charlie into a wall, call safe_resetBNO055(), and that is ZERO! Very stable, doesn’t drift, not influenced by calibration, or clumpy molten magma.

In your case, you have a fixed point of reference - Carl’s dock.  Even if Carl’s dock moves, the dock is always his standard 0 - 0 - 0 reference point.

In my case, there is no fixed “zero” point. I just plop Charlie down on the floor, fire him up, and send him on his way. When done, I bring him back, pick him up, turn him off - (or plug him into ground-power for dev work), and put him away so the granddaughters don’t trip over him.

What I was hoping to do was to be able to tell Charlie to “go West” or “turn 90 degrees”, and have that be what happens.  I don’t expect “west” to be exactly 270.00000 degrees true - if I need that kind of accuracy I have a Dexter GPS module I can hook up to him - but then again, I’m not sure he’s ready to go outside just yet.

What I would like to see is “reasonable” accuracy - if I tell him to make four 90° turns, I’d really like him to end up where he started, not in St. Petersburg or Vladivostok.

(or, in a totally different part of the carpet, headed off to who knows where.)  Maybe not decimal accuracy as to absolute direction, but a reasonable repeatability with respect to the four cardinal points and specified turns.  Magnetic variation, deviation, declination, discombobulation and all that? Not so important.  He’s not flying trans-Atlantic. . . .

Then again, maybe I can find a sheet of Mu-metal and make shields for the motor/encoder pairs?  I wonder, do they need to be grounded to provide magnetic shielding?

Dexter’s compass_robot.py does exactly that.

Maybe not decimal accuracy as to absolute direction, but a reasonable repeatability with respect to the four cardinal points

Actually, you don’t need compass bot’s complexity. I wish DI had built a layered set of examples, instead of going straight from “read the sensor” to “multiple threads with command and data queues implementing a dynamic stimulus-response feedback loop”.

I wish DI had built a layered set of examples

You don’t know how many times I’ve said that with my project!

I’ve gotten to the point where I can read the status of a plugged in joystick, but I haven’t been able to get the dynamic data yet.  All the online examples do this in the context of writing a game - and the actual “read the dynamic data” is buried under layers and layers of game logic.

The on-line spec’s?  Compared to some of those, DOD MIL-883 specifications read like a third-grade story book!

What I would like to see is “reasonable” accuracy - if I tell him to make four 90° turns, I’d really like him to end up where he started,

Spoken like a true software maven!  As for me, the mechanical adjusters for Carl’s eyes would be infinitely easier - that darned remote robot code is going to be the death of me yet!

remote robot code is going to be the death of me yet!

You can always give up and switch to the “old remote robot” which used two buttons in a phone browser. Left: turn left. Right: turn right, Both: Go Forward.