It shows -1, -1 similar to the issues reported in the discussion (
Raspi GrovePi Temperature&Humidity Sensor showing -1 -1 ).

It works fine when I used GrovePi and Raspberryi 3 and it only shows -1, -1 when I switch to Grovepi Zero.

Again, this problem is only for GrovePi Zero setup and not with GrovePi+Pi3.

Sometimes, I see a valid number at the beginning after reboot and immediately it goes to -1, -1. 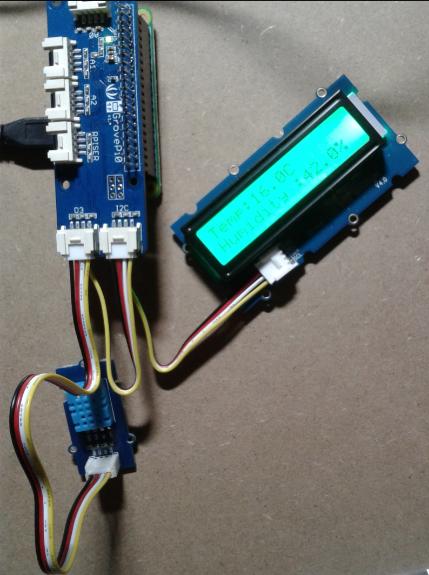 Firmware update as suggested in the following post seems to resolve the issue.
I can see the numbers more consistently. 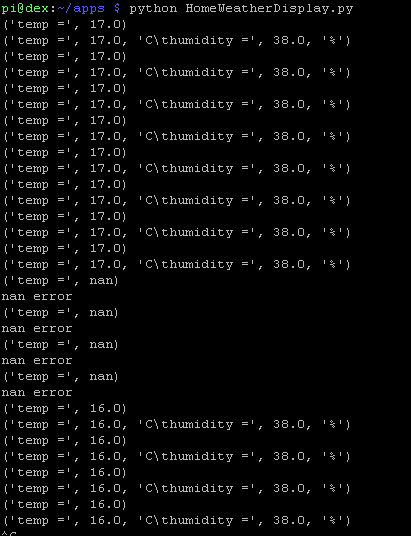 Hi Scott, ###I have a couple of questions: What image are you using: wheezy or jessie? Does the RST LED stays on all the time? If it’s this way, then the Raspberry cannot communicate. Have you run the sudo bash GrovePi/Script/install.sh ###And here are some suggestions: Run the firmware update without any sensors or HDMI connected to the Pi. So, open a terminal and follow this commands.: cd Desktop/GrovePi/Firmware sudo bash firmware_update.sh Then next, let’s reinstall the G…

###And here are some suggestions:

###And here are some suggestions:

Run the firmware update without any sensors or HDMI connected to the Pi. So, open a terminal and follow this commands.:

Then next, let’s reinstall the GrovePi dependencies (there might be something that’s still not set up). After you update the firmware, you’ll reboot it. So, open a terminal and follow this commands:

I use Grove Pi Zero and DHT11. They don’t work at first. After updating the firmware, they only worked normally once. But after restart, the data I received was -1. Any idea?

Do you have a GrovePi+ around? If so, can you test the DHT11 sensor on the regular GrovePi+?
We want to see if it’s the same thing for both of our boards.

Sorry for the late reply. I test the DHT11 with GrovePi+ and Arduino, they works good. But with zero, I just got 0.

Both the GrovePi and the GrovePi Zero use the exact same firmware - also technically, they are identical, it’s just that the former one has more ports - that’s it.

Any progress to know why the sensor is not working?

We’re working on it and as soon as we have something, we’ll make sure to let everyone know about it.

Has there been any progress in getting the sensor to work? I need to have it working before the end of August.

I am still waiting for a reply to my email regarding progress of the problem with the sensor not working for the GrovePi0. Have you solved the problem or an alternative that you can suggest/send as if it is still not working the the item is not fit for purpose.

I’m about to receive a package filled with goodies that will give me the chance to fix the problems with the GrovePi0. As this thread has the pending label attached, you can be sure I won’t forget about it and I’ll be back with a reply to you as soon as we get this thing done.