How does brickpi case black connect to pi?

I was looking at the brick pi case black and was wondering how does it connect to the pi? Is it upside down and just stacks?

One thing I’ve noticed with my brickpi, is that if I accidentally bump the brickpi, it can cause the pi to reboot. I was thinking of connection the brickpi to the pi with a ribbon cable to eliminate that problem. Since I’m building racing robots, it will bump into things and having it reboot would kind of suck

I can always buy a ribbon cable and 3D print my own case, but just curious how others solve the issue of accidental reboot when the pi and brickpi are bumped.

This is the same case (the same cut and thickness) as the clear BrickPi case.

The Raspberry Pi should be mounting to the case with hardware, not free-floating. 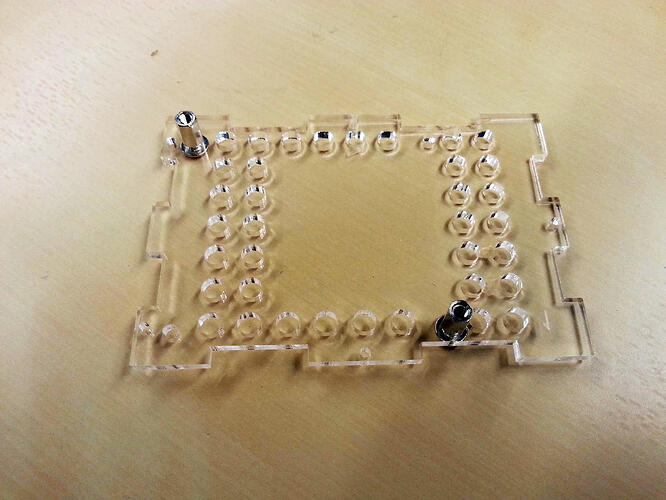 Can you post a closeup picture of how you have the BrickPi mounted? That’s not good if it’s resetting, I assume something must be loose if the power is cutting out when it’s bumped.

Here is the case assembly instructions by the way: http://www.dexterindustries.com/BrickPi/getting-started/basics/assemble-brickpi-b-case/

I do mount the pi to my clear case and stack the brickpi on top. last year when I was testing it, if the motor cable happen to bump a chair, the wiggle between raspberry pi and brickpi was enough to cause a reset. My son and I were thinking of ways to prevent that by designing our own case which clips the brickpi in place to prevent it from getting jostled.

the other night I was plugging in a motor to the brickpi and that was enough to cause it to reboot the pi. I purchased a GPIO down grade cable from adafruit and will try to design a case that mounts them separately.

I got the new BrickPi case today and assembled it. It’s a much better design than the older clear case. One improve would help though, a slot for the raspi camera. A couple of things I really like compared to the old one.

I did notice the new one isn’t as powerful as the older one. When I run the LEGO-Motor_test.py, the old one runs faster than the new one. Is there a difference in the power output between the new and old?

There shouldn’t be a power difference between the two. Are you using the same battery pack for the motors? Motors are directly exposed to the battery pack.

I used the same battery pack on both. I’ll get some new AA batteries and try again.

I used a drill to cut a whole on the battery plug side of the case. It’s not pretty, but it will do the job for now. It would be nice for the case to have a hole here to make it easier for people that are using camera’s with the pi.