No power connector on Brick Pi

Hi, I’ve bought an Advanced Brick Pi (low power consumption model) from your UK distributor but it doesn’t have the white 2 pin power connector shown on your video, see attached image of the board - how do I power it please ?

This is defective, it looks like that part is missing. I’m really sorry about this!

We will replace it immediately. Can you contact us here; http://www.dexterindustries.com/contact/ with information on where you purchased the item, and where you are right now, and we’ll find the most efficient way to get you a replacement.

I’m really sorry about this, we’ll make it right asap.

I find myself in the same position. I bought a BrickPi from ActiveRobots (NB. I’m outside the UK though and collected it from a relative when visiting).

Mine looks the same as the one in the photo and after playing with things and getting stuff running using the brickpi_C interface, I found the power to the motors was very limited. Googling for power connectors brought me to the page which describes the connector, and then from there to here.

What should I do to increase the power? (Is there any way I can connect 9V wires directly to the circuit board and make my own connector?

Hey JB, can you post a picture of your BrickPi?

I paid for my BrickPi via PayPal, I got a refund from them when the BrickPi was found to be defective, I returned te item to AR in late August / early September, I hope they didn’t then ship it to you. The BrickPi they were supplying was to an old standard, superseded and improved both from a hardware and software point of view.

Dexter Industries were fabulous throughout and fully stand behind their product - first class !!.

John, Here’s a pic of my BrickPi, apologies for the quality.

Hey JB, it looks like your board is correct. Unlike Poweruser it looks like you have the power adapter (the white plastic part) soldered on. You need to add 9V power though to get power out of the motors. It looks like you’re powering them off the USB. That’s fine if you’r enot running motors, but if you’re going to run motors, you risk burning something out. 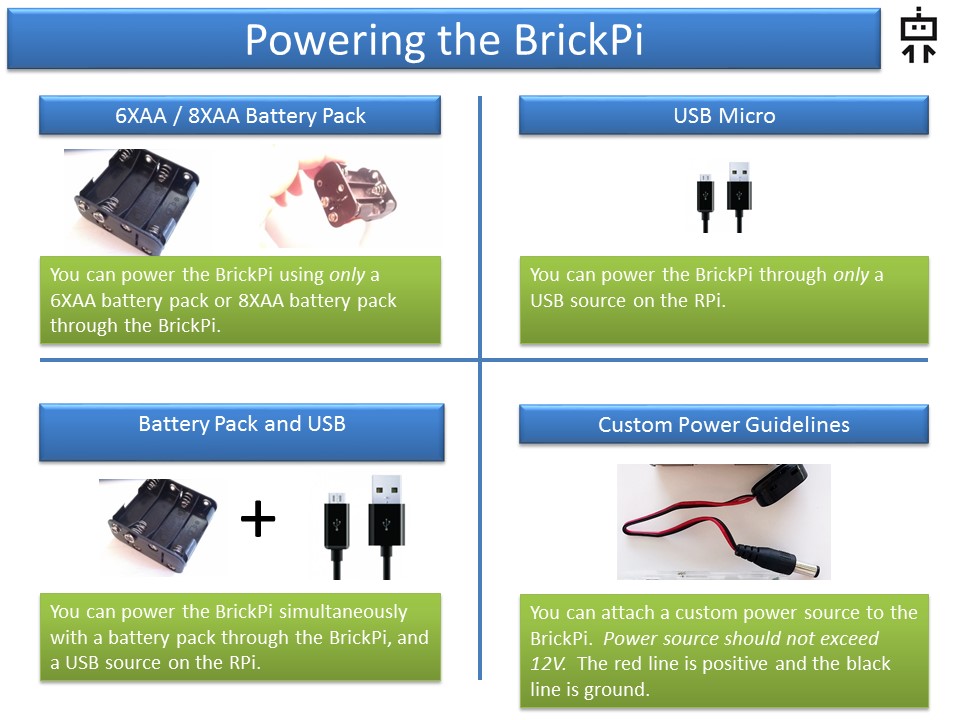 Your battery adapter is going to look different, but it should have been included in the BrickPi package.

Thanks. I looked on the web and saw pictures which showed a barrel jack type adapter and assumed there should be one of those. I’ll check for a battery adapter, I don’t remember seeing one, but maybe I misplaced it - as long as I have the 9v connector on the board then all is fine…

JB, sorry about the confusion there. We upgraded a few months ago, I expect to see a few more of the older ones around!

NB. Would a 7.5v RC battery pack be enough, or does it really need 9v?

Hey JB, if you can make a 7.5v rc battery connect, that’s fine. The only challenge might be: it needs to remain above 6V for the Pi to stay on. You have about a 1V dropout from the voltage converter.

Careful with the power setup on this one, there’s no protection for putting it in backwards. I found the old guide to connecting and it’s in the attached PNG.