Raspberry Pi B+ and the BrickPi3: BrickPi not found (Problem ID 24280)

Stacked a BrickPi 3 hat onto a Raspberry Pi B+. Mounted on a simple robot car with elements of LEGO MIndstorms NXT 2 motors connected, to connection MB and MC. An ultrasone sensor connected to S1… O.S.: Raspbian Jessie, latest upgrade. WiFi working. RealVNC session from desktop PC (Windows 10) into Raspi works. I cloned the BrickPi python script tree from .github. Various python scripts seem to wait for a response that obviously does not come. I ran the troubleshoot.sh and sent the result log via this script. Problem ID is 24280. The end of the error_log.txt tells that the BrickPi is not found. The troubleshooting log reports: “I2C still in blacklist (ERR)” and “SPI still in blacklist (ERR)” but I had uncommented them before. The log also reports "Serial Port not Enabled (ERR), but I had it enabled via raspi-config.
I would appreaciate your help.

You mentioned cloning the repo but there’s no mention of running the install script.
The install script can be found here: https://github.com/DexterInd/BrickPi3/blob/master/Install/install.sh

Could you confirm that you did run it?

Hi Cleo, Thank you for your reply. I checked the README.md file again and I think I cloned the wrong set for the BrickPi and the BrickPi+. From the Setup_Files folder I ran the install.sh. I have a screenshot of it.
I am going to clone now the one for the BrickPi3 and see what happens.

Hi Cleo. I now cloned the BrickPi3 repo into /home/pi/Dexter/BrickPi3 and I ran the …/install/install.sh.
No problems. But the Read_Info.py reports "BrickPi3 firmware needs to be version 1.4.x but is currently version 1.0.1. I am a bit astonished that I have to update the firmware so soon because this BrickPi3 was bought on the 18th of May 2017. See order: 121836.
So I ran “sudo bash /home/pi/Dexter/BrickPi3/Firmware/brickpi3samd_flash_firmware.sh”
This did not run successful. The first error reported is “Error: Could not initialize the debug port”.
What can I do to correct this? 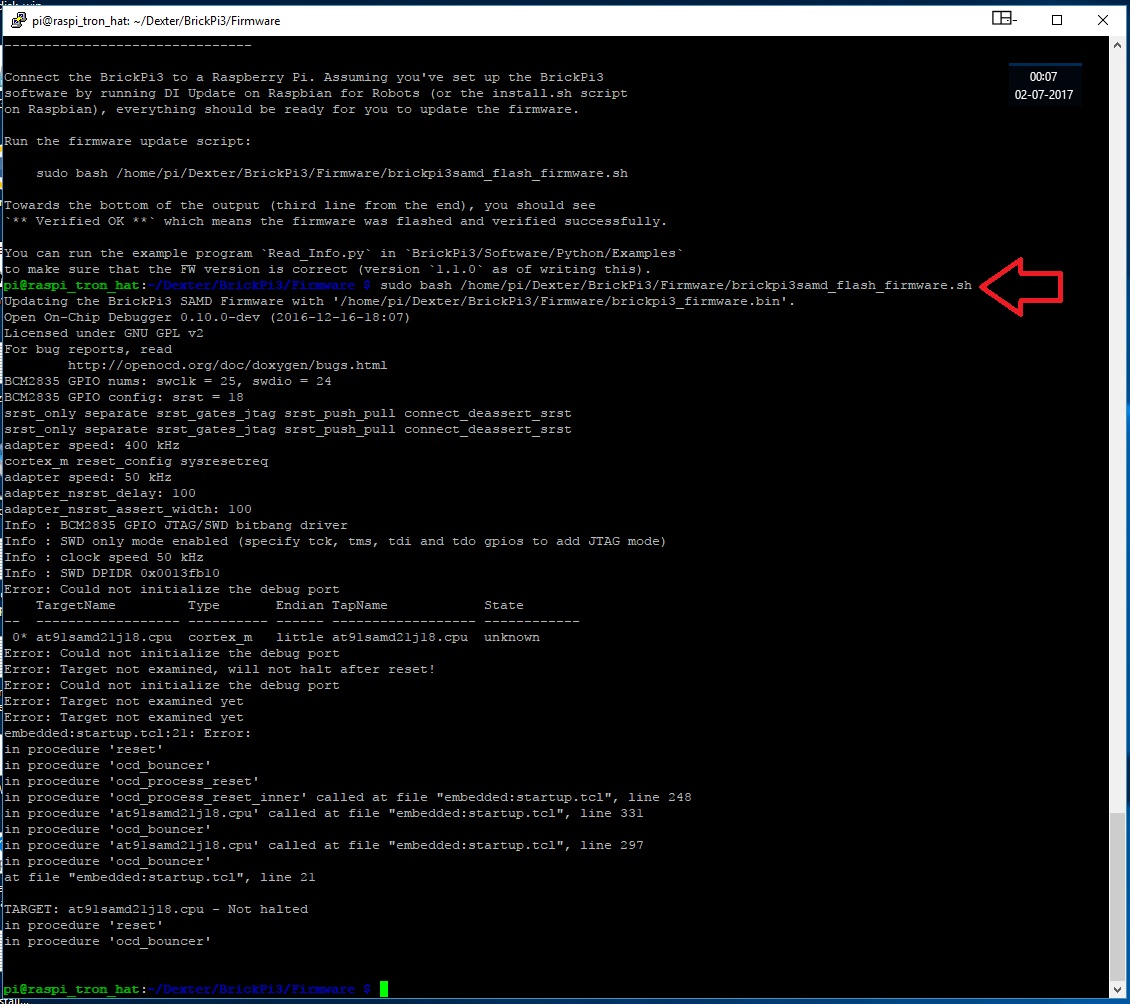 Hi Cleo, Today I burned a copy of the Dexter Ind’s Raspbian-For-Robots to a 32GB SD-card. Installation went OK. Then I tried to run the DI Update - the part to update the Firmware for the BrickPi3. The log gave the same errors as when I was using the updated Raspbian-Jessie distro. Then I ran the DI Update for the Raspbian system. That took about 45 minutes to complete. Again I ran the update for the firmware of the BrickPi3. Unfortunately the same errors are continuing to appear. I begin to get the feeling that there is something wrong with the hardware or the PCB of this BrickPi3. I attach the latest update log for you to check. I hope that the inability to update the firmware is not hardware related. Awaiting your reply… Dexter_Software_Update_log_2017_07_02__17_54_43.txt (168.5 KB) 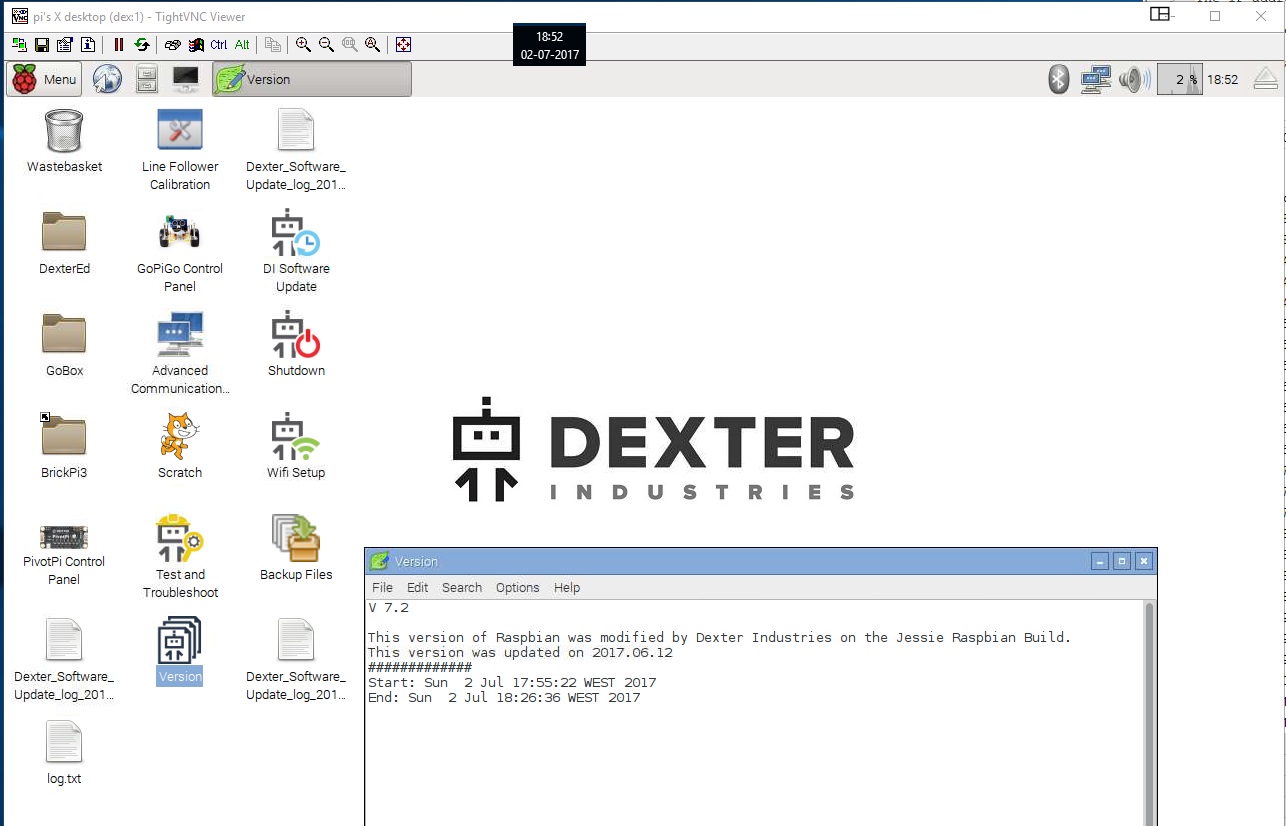 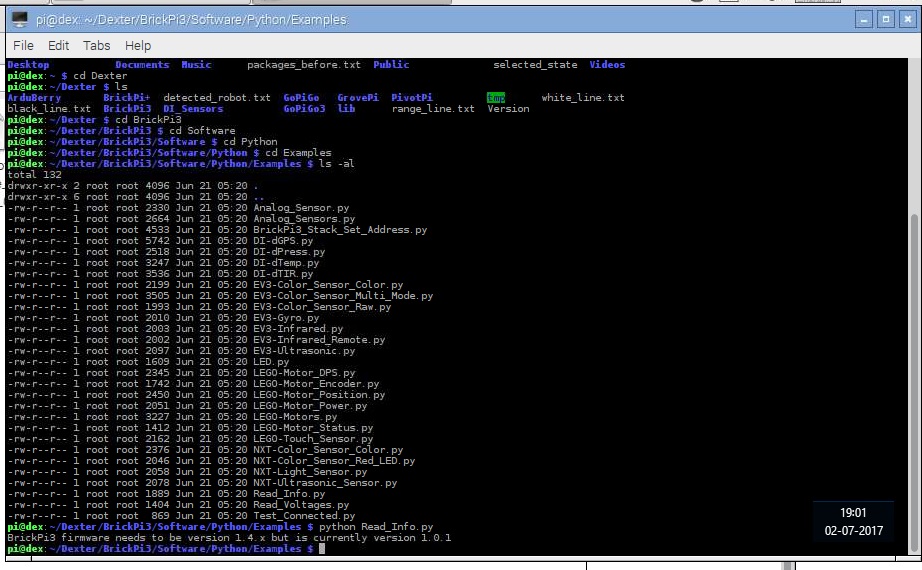 Today around noon I interchanged the Raspberry Pi B+ for a Raspberry Pi 3B. I Connected the latter with the BrickPi3, booted up and ran the Firmware update script. It ran without problem. Then I ran the python scripts: Read_Info.py and Test_Connected.py. Also these ran OK. See the images. Conclusion: my Raspberry Pi model B+ is not compatible with the BrickPi3 while using the latest version of “Raspbian-For-Robots” neither with the stock Raspbian Jessie (Pixel). So now I go to do further tests…see if I can get the NXT motors running. For me this problem case can be closed. 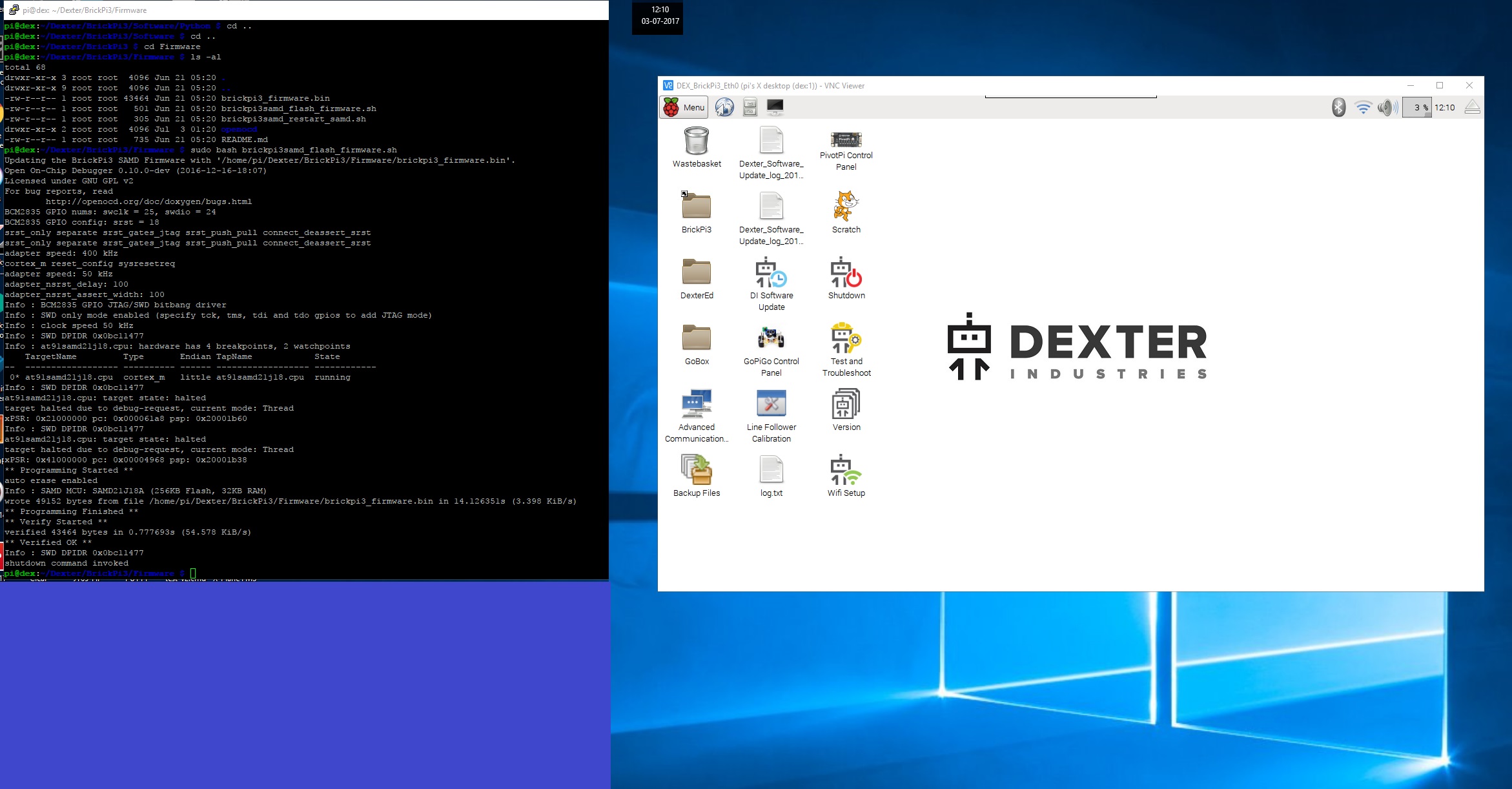 Okay, so I’ve been running the BrickPi3 on a Raspberry Pi 3 and it worked.
So, that’s great news to hear.

@paul.schulinck, I concur the issue you had.
It seems that I cannot flash the firmware onto a BrickPi3 with a Raspberry Pi B+ Model.

On the other hand, the BrickPi3 can communicate with a Raspberry Pi B+ Model provided it was updated to the appropriate version - as of now I have version 1.4.3 and it works.

Hi @RobertLucian,
Thank you very much for your reply. Yes, that would be great if you could do a test with a model B+. I think that I read somewhere here at DI webpages that the model B+ is compatible with the BrickPi3. It is possible that there is now a problem with the latest Rasbian distros. Anyway I appreciate your intention very much, because if we’re able to find the cause of the problem I could go to use my model B+ again because I was using my model 3B for other things. I want to add that when using the model B+ I found an error in dmesg saying that kernel modules could not be loaded. Then by a cut-ant-try method I discovered that when I uncommented “spi-dev” in the file /etc/modules, the error mentioned disappeard in dmesg. and since I still had the “dtparam=spi=on” in the /boot/config.txt I think that would be enough to activate SPI. – Awaiting the results of your tests. Tnx|

So, I’ve been diving a little bit on this issue.
Before briefing you on this matter, here’s some clarification:

Our task is to create a configuration file that’s supporting the Raspberry Pi B+ - that’s all.

Again, this holds true until proven otherwise, so we need some time to work on this before coming out with something.

Provided your BrickPi3 is updated to the latest version, stack it on top of your Raspberry Pi B+ and try to run Read_Info.py again and see if it works. Mine did!

Again, thank you for helping us getting this thing solved.
We will try to come up with a solution these days.

Hi @RobertLucian ,
Thank you for your reply and all the information and tips. As you suggested, I stacked the BrickPi3 once again on top of the Raspberry Pi model B+, booted it. Then I started a remote session into the B+ via VNC. I went to the python examples folder and ran. Test_Connected.py and Read_Info.py. Both python scripts ran without problem and returned the expected output. See the attached screenshots. This confirms what you wrote that it is possible to use a Raspberry Pi model B+ with a BrickPi3 as long as the BrickPi3 is flashed as needed by the software. It was a pleasure to help.
For now I am going to use again the model 3B with the BrickPi3 because of the benefits the 3B has: more rapid booting, Wireless incorporated and so on. 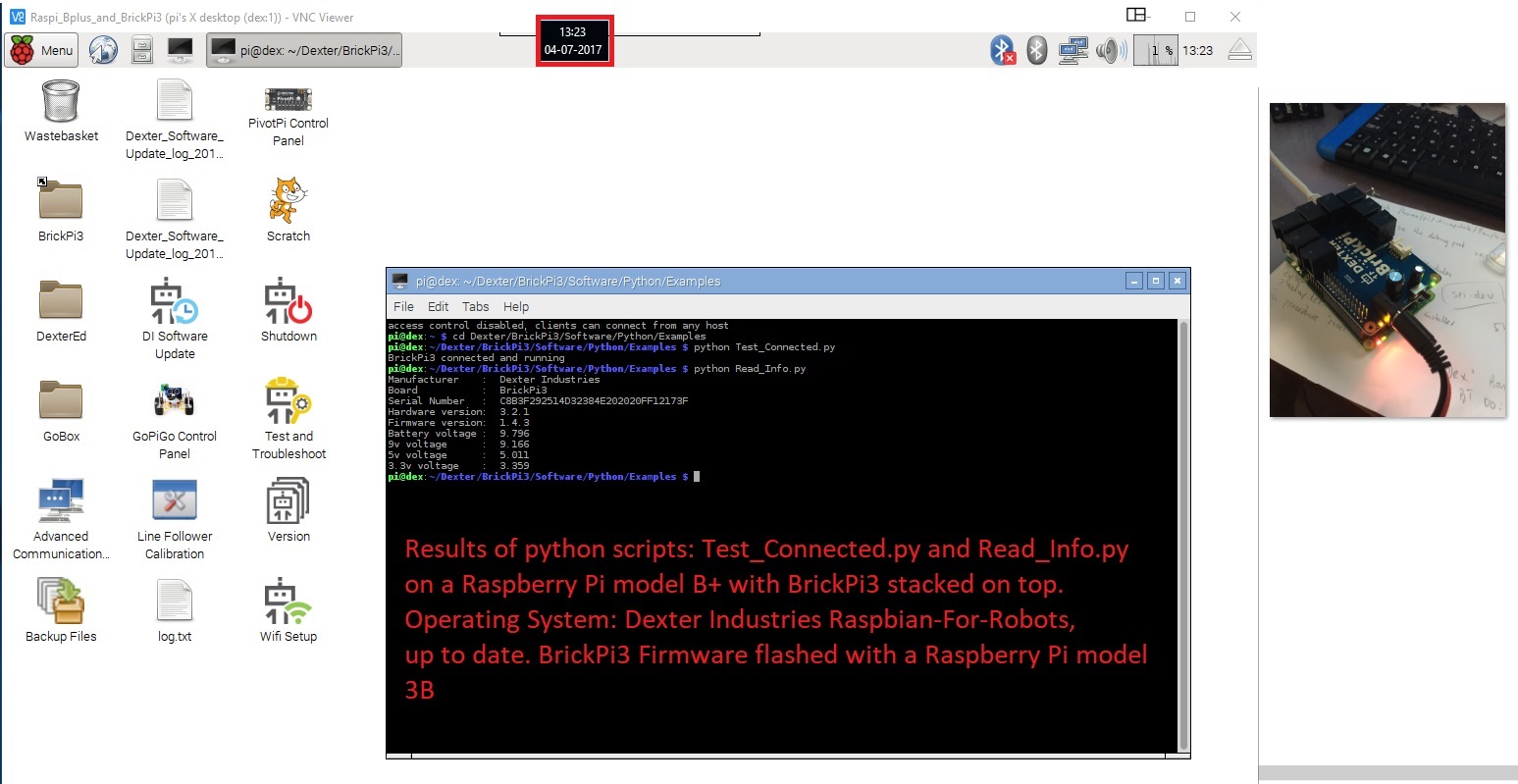 I found the source of the bug that prevented the B+ from flashing the firmware, and I fixed it. You can update the BrickPi3 installation (instructions here) to take advantage of the bug fix.