Looking at the logs to find out why spi-dev wasn’t loading up on my instance of Raspbian for Robots, (Spoiler, it’s not supposed to), I found something interesting near the top of the dmesg log:

Did you catch the last two lines?

All four CPU’s (at least on my Pi-4), started in “HYPervisor” mode, (i.e.  virtualization mode enabled), and this is confirmed by the next line stating that “Virtualization extensions available”

I’m not sure I’d be willing to run a full-up version of VM-Ware on my little Pi-4, but it’s interesting to know that the Pi can - at least at the hardware level - handle virtualization.

Maybe I can find out how to run GoPiGo O/S in a virtual machine inside Raspbian for Robots?  Totally righteous and cool beanies!

VM-Ware on my little Pi-4 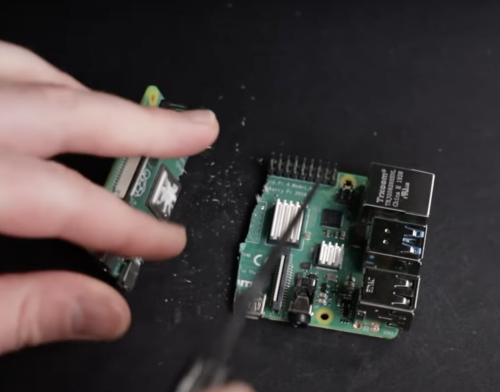 I will have to try that later on.

Cool that you can do that. Don’t know why he destroyed a Raspberry Pi at the beginning though - it didn’t even accurately make his point (maybe it had been accidently fried, and so wasn’t just a waste).

Of course I’ve got my hands full with just one OS running.

Maybe to make a point?

He almost made the point of tuning me out when I saw him hack that beastie up!

Puzzled the heck out of me too as it made absolutely no sense in the context of what he was saying.

That might be interesting to try later on, but right now it’s pretty far down my list.