Raspbian For Robots Oct 17, 2020 Release Test Log For My GoPiGo3

Initially, I did not detect any issues with moving from Stretch based R4R to the “PiOS” based R4R

and the Raspbian For Robots Desktop appears to be working:

Servos, Distance Sensor, IMU, and Camera are all working.

Both onboard and USB dongle WiFi are working as expected.

USB Microphone is working (slightly different home/pi/.asoundrc and /etc/asound.conf than prior)

Thanks for the test @cyclicalobsessive

Please note that this version is not an official release. For once, the SD card does not resize on first boot.

This is an issue with the VNC server. I’m using a straight VNC viewer and running into the same thing. Usually it fixes itself. It looks like the VNC server has a sleep mode.

Update2: 95 hours into the latest session, Carl went crazy repeating “Unable to Undock…Unable to Undock”. He does that when the distance sensor claims there is something blocking forward movement, or some error checking the distance. In this case - I2C failure.

Distance Sensor uses HW I2C which was rock solid before, but IMU uses SW I2C with clock stretching and was never rock solid. This time SW I2C messed up about 26 hours prior and the HW I2C lingered on somehow eventually also failing.

Update3: I2C didn’t last the night. Carl is shutdown until I can return him to his backup OS. (Have to eat some breakfast now.)

Q) Does the / Will the next Raspbian For Robots also have TFLite and OpenCV packages already installed?

The Python libraries have been updated to newer versions. Please note that tensorflow lite is now installed, and a face recognition library is available (see https://pypi.org/project/face-recognition/) 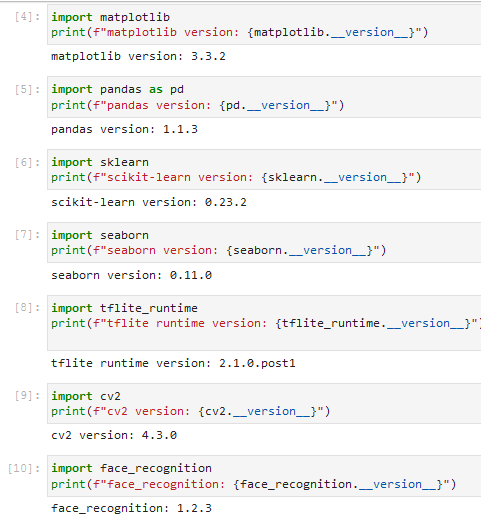 Does the / Will the next Raspbian For Robots also have TFLite and OpenCV packages already installed?

Probably not. Raspbian for Robots lets you install whatever you want. And having those libraries in makes the image so much bigger

Installed the TensorFlowLite image classification example and modified it to print to the command-line if an object classification probability is greater than 60%. It successfully classified a clock that I held about 6 inches from Carl’s face…but then it also thought it saw some items not likely to be in my home!

Carl was getting low on juice and the TFLite program ran the battery down pretty quick as he exclaimed “Turning around to Docking Approach Point”.

Have to test more when he gets juiced up.

In GoPiGo OS, I have modified the same script to print to console too. And by experience, you need to handle a confidence level of at least 85% to avoid the non existing sliding door. It did manage to identify my Shih Tzu as an actual Shih Tzu too 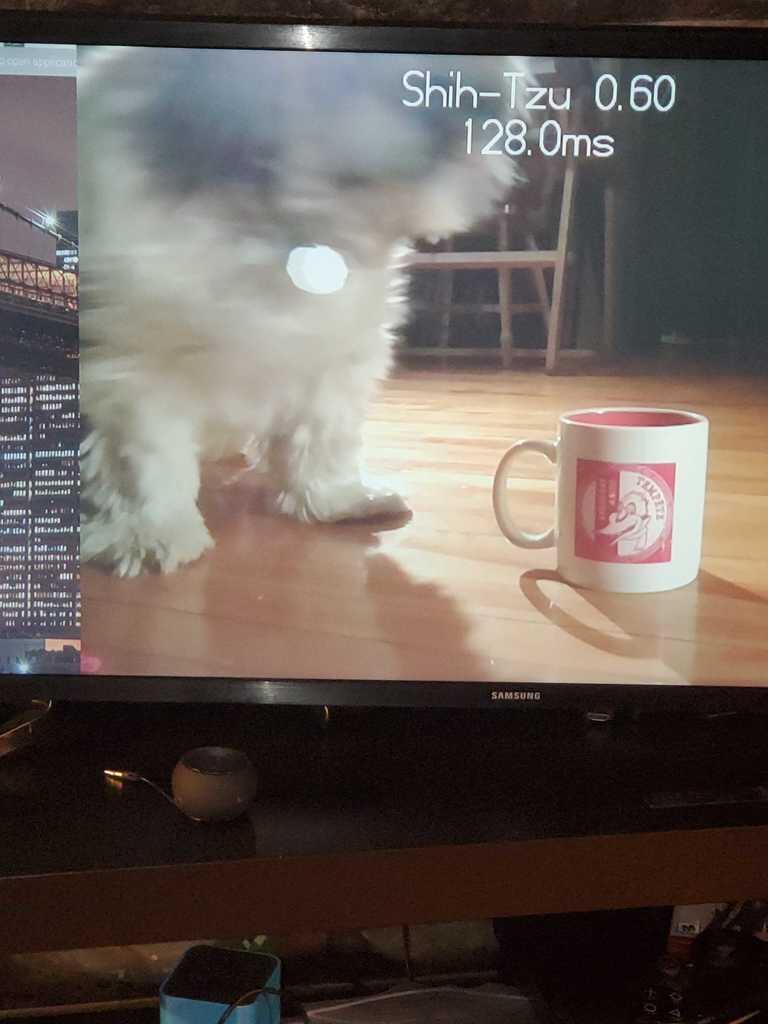 Be sure to look at my version on git, it has all the options plus a save annotated image to file

So, the conclusions from all this are?

the conclusions from all this are?

HW and SW I2C “banging” continues - very good results so far but no conclusions yet.

The original testing was performed on the exact R4R Oct 17 image.
Current testing is being performed on

One final test remains in plan - to restore the automatic imu logging which uses my “safe” IMU class.

Carl has run very smoothly 24/7 for eight days on this image, at higher processor loads than his usual. He seems quite “happy” so far.

Though I might be fairly clever, I have not yet reached the pitch of intelligence where I can look at a blob of numbers as raw data and understand what they’re trying to tell me.

Though I have not yet accomplished what you do, your work fascinates me. It’s intriguing. I really enjoy watching the way you carefully and precisely chop up the Dexter/MR designs into tiny pieces and then reassemble them into something that works.

What you’ve discovered is ultimately destined to save me, and others, much time and angst.

I’m with @jimrh - thanks for your thorough testing. I’m still very, very new on the platform, so this is quite helpful.
/K

This is an issue with the VNC server. I’m using a straight VNC viewer and running into the same thing. Usually it fixes itself. It looks like the VNC server has a sleep mode

There is this setting checked:

Today, I also lost the desktop. When I connect through noVNC or through remote desktop, I get to a ModRobotics desktop without the desktop widgets. 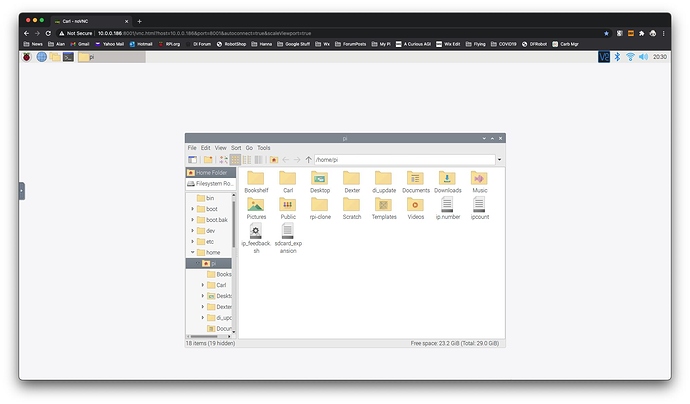 Work around is to open desktop folder, or LogOut and Log back in.
(Does not happen if Logout then Disconnect Session, Then Reconnect and Login)

For the last several days, I have been fighting to get RPI-Monitor to properly start at boot on both Carl, and my “DeskPi.”

Carl is running R4R over PiOS, while the DeskPi is running PiOS. Carl was seeing:

I found that starting the RPI-Monitor with Carl’s reserved IP prevents the error to allow this useful tool to work.

And immediately, RPI-Monitor showed how smart Carl actually is!

Recently, I changed Carl’s recharger which lowered his maximum recharge rate from 1A to 0.9A. Carl was getting off his dock before the trickle charge light came on due to “Rule 230c - Probable Trickle Not Detected after 3.5 hour charging”, so I changed the time for that rule to 4.0 hours to provide a little more time.

Today is the first day I have RPI-Monitor running that I can conveniently review the recharge voltage curve, and as I was doing so Carl announced “Trickle Charging - Dismounting”. I quickly looked at the charger to see the status LED showing solid green which means Carl was indeed trickle charging.

Looking through his recharging log showed it still was due to rule 230c - Probable Trickling Not Detected (after 4 hrs), but reviewing the RPI-Monitor shows that the charger had indeed not long before switched to trickle charging - Carl is so smart! 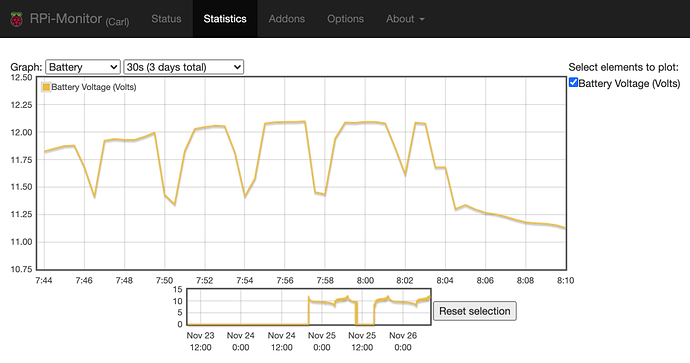 (I would have preferred to see that Carl detected the trickle charge when the average voltage started going down instead of up, but the important thing is to get off the dock when the charger is trickling.)

Who would believe the happiness playing with Carl can give? I’ve been up for two hours and still haven’t prepared my breakfast.

Update: The next morning Carl recognized trickle at 3.8 hours on the dock (rule 230: over 12v and mean voltage has negative slope), before the 4 hour “probable trickle” rule 230c could fire!