Simulating a Worm Brain: a graphic sketch of the net architecture?

Hi,
i already have been working a lot about trainable artificial neural nets on NXTs and Arduinos (single- and multilayer nets, e.g., Feed-Forward Nets, Backpropagation nets, and recurrent BP nets (Jordan net, Elman net) ).
Indeed I have implemented the world-wide first full-autonomous neural nets running on an NXT (FF net) and an an Arduino Due (BP + Jordan net), both for interactive training and for processing.
http://www.mindstormsforum.de/viewtopic.php?f=70&t=5601

Eventually the architectures of all the mentioned nets are very well-defined, e.g.: 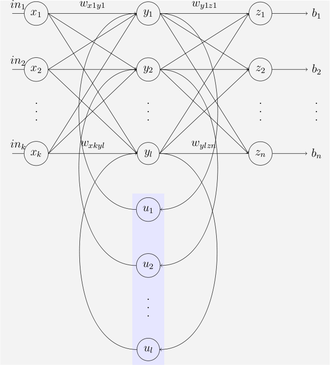 But now I am curious about the architecture of the artificial C. elegans net, by a sketch, i.e. a graphic illustration -
however, I can’t find anything about that.

Could you help me further with that problem?

I am at the moment doing some work on the C . elegans worm.

I am at the moment in the stage of waiting for parts to arrive for building the prototype robot worm. I will be making a robot based upon the one made at Leeds University in the UK by one of the lead researchers in to the worm. See his worm robot here. https://www.youtube.com/watch?v=1Yzu93x4qco

I was contacted by Tom Portegys a software guy that does a lot of AI which is how he became involved in OpenWorm.org the international body for research into the worm. U will like this guy as although he can program in any language he loves C++. If you want answers into the neural network of the worm as him, the forum for discussion on the worm is here https://groups.google.com/forum/#!forum/openworm-discuss

hi,
1st of all, I am just interested in the Dexter BrickPi implementation of the net. As it was impemented by Dexter employees I think that they should have the related information.

Nonetheless, I am curious also about the original worm brain AI net. I already have contacted the openworm guys 1 year ago for several times but I still got no answer yet. Perhaps you can achieve the graphic sketch of their original NN architecture from them? I abandoned my attempts writing to them.

But eventually my question here in my TO post is just about the current Dexter worm brain version.

I do believe that the GoPiGo implementation was written by Timothy Busbice his email is interintelligence@gmail.com but it was through Tim that I was contracted by Tom Portegys.

I already contacted Timothy Busbice and Tom Portegys (I remember very well) but as already stated, I got no answer yet at all.
But the BrickPi worm program is povided by Dexter, so Dexter is supposed to have all the required information already availbe

@ Dexter employees:
who ever provided this worm program for the BrickPis: could you give me please some information?

@HaWe,
That project was contributed by Timothy Busbice and the Connectome Project. You should reach out to them here for more information.

no, all I can find there is vague chatter, no useful information at all.
But Dexter is providing this program for it’s BrickpI, so which is the information that Dexter has got about his own Python program and ANN architecture?
I actually don’t speak a single word in pythonic, so I can’t read and also can’t reverse-engineer that at all.

is Dexter really not able to provide information about his worm program?
How is a single neuron designed? Like a perceptron - or different from this?
Which are the neural layers like (input, output, intermediate, hidden, recurrent) ?
which are the connections from either layer to the others?
The most simple way for this description would be just an overview chart / sketch !

I don’t think we’ve provided any code for using the BrickPi and the c. elegans model; we’ve just provided it for the GoPiGo. This was an outside project contributed by Tim at the Connectome Project. I know that’s been mentioned before, but I just want to reiterate that:

ok, thanks for pointing that out - I thought Gopigo and Brickpi was all the same with respect to Python.