The Pyhton examples don’t manage to communicate with the BrickPi3.

Here what I have done:

Running the experimental image of buster on a Pi4 model B with 4 GB RAM and a BrickPi3. The brick is powered via the provided power supply, the green light by the switch is on, and there is no light where the power supply is plugged into the brick.

Flashing the firmware onto the BrickPi3 and using Buster is still hit and miss.
Keep attempting to flash the firmware. Eventually it goes through.
It sometimes takes me 4 attempts.

After the firmware update eventually went through, it now looks like the Python API is working, see below. I am going to check with C++ as well.#

Question: say I take a backup of the micro SD by taking its image, and then I flash the image (with balenaEtcher) on another micro SD card; after I boot with the newly flashed card, do I need to run the firmware update again?

Hi Francesco,
Nice to see the firmware finally went through!
You won’t need to flash the firmware again, unless we release a new firmware number. It’s now in the brickpi board, and is good to go, even if you swap SD cards.

I have compiled and run info.c, and it worked fine.

Next I will install ROS and write code to run the LEGO motors.

Thank you for your support.

First, glad you’re up and running with the brickpi. And apologies that you had to go over so many hurdles.

Second, a word of warning about ROS. People have reported challenges in getting it to work on Raspbian. I don’t even know if it can run on Buster. Most people that I know of who use ROS have switched to Ubuntu.

The Raspberry Pi, particularly the Pi-3 and Pi-4, are picky about the quality of the SD cards used.

In my own experience, the cut-rate bargain brand SD cards are nothing but trouble. Even though they flash and verify, they usually don’t boot - and if/when they do boot, they’re totally unreliable.

Save yourself much grief and buy top-brand SD cards - the faster the better.

Avoid Kingston cards, they have known quality issues with “ghost-shift” counterfeits being mixed in with the better quality stuff. I’ve had trouble with them.

I have built ROS from source on the Pi4 with buster (the experimental image), it went smoothly. I have also implemented and run the publisher/subscriber/services ROS tutorial, so far so good. I am new to the BrickPi3 API, I thought that I would have a harder time in porting it to buster than in building ROS from source.

I have built ROS from source on the Pi4 with buster (the experimental image), it went smoothly. I have also implemented and run the publisher/subscriber/services ROS tutorial, so far so good.

That’s not just good, that is great. Well done!

Would really love to see a picture of your bot.

Here it is. I have just started programming it, implementing the base controller for ROS navigation. 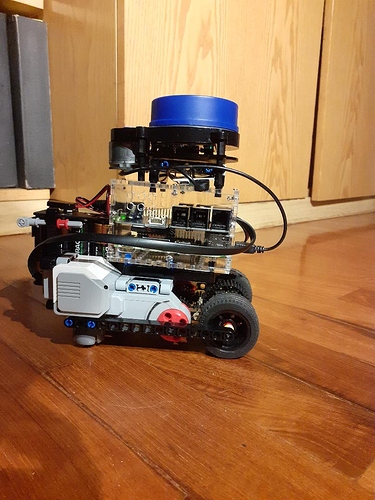 ROS is about to take over the world of robotics!

ROS is about to take over the world of robotics!

So where can I learn more about it? Especially as it relates to the GoPiGo.

Maybe a ROS for Robots? Or is that a kind of an anti-oxymoron?