For those of you whose life is confined to the GoPiGo-3 robot, allow me to introduce to you his little brother - the GiggleBot! 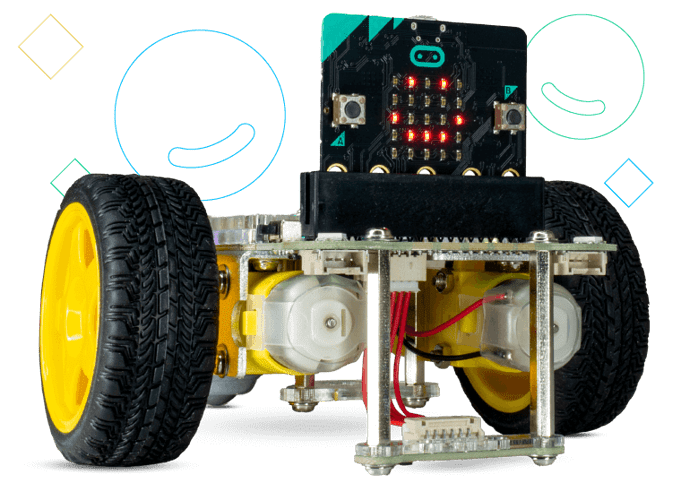 It’s just as cute as the original GoPiGo-3, (before they changed the distance sensor mount) - or perhaps a bit cuter!

It comes with certain things standard, like the line follower, a bunch of NeoPixels, two servo outputs and a bunch of holes to mount things.

You can plug in a distance sensor - complete with googly eyes! - and it’s useful right out of the box.

Like the base GoPiGo package, the micro:bit is not included, though since it’s not being scalped, (at least not yet), it’s relatively inexpensive with the micro:bit-2 going for about $17 at Adafruit.

Note that there are other micro:bit clones out there - the most notable being the Adafruit “Clue”, (a separate article in itself!).

The micro:bit, and as a consequence the GiggleBot, programs in Microsoft make:code which is another Blockly clone like Bloxter - and there are specific GiggleBot extensions you can download when starting make:code to gain access to the GiggleBot specific features and capabilities.

Can you program it in other languages?  I think so, though it has been a while since I’ve played with a micro:bit.  The Adafruit Clue does NOT program in make:code yet, (they’re working on it), but it can be programmed in Circuit Python and other programming IDE’s.  (I think the Arduino IDE is one of them.)

The notable thing about the GiggleBot is that, though not as complex as the GoPiGo robots, it’s a lot more rugged.  It’s encased in thick acrylic, comes pre-assembled, and appears to be rugged enough to give to a bunch of pre-school students - though first and second graders should be a cinch!  Aside from the micro:bit sticking up from the chassis, I strongly suspect it could withstand a fall down my basement steps and a hard landing on the concrete floor below - and land on its feet and be ready to tackle the next challenge.

Both the ruggedness and the simple interface suggest that it’s designed for a younger crowd than the GoPiGo - though I suspect that anyone who likes challenges will find it meaty enough.  I, for one, am looking forward to trying it with the Clue board, though it will require a bit of research before I can get it working.

Since I had to leave Charlie behind, (he hid in his box when we brought out the suitcases), 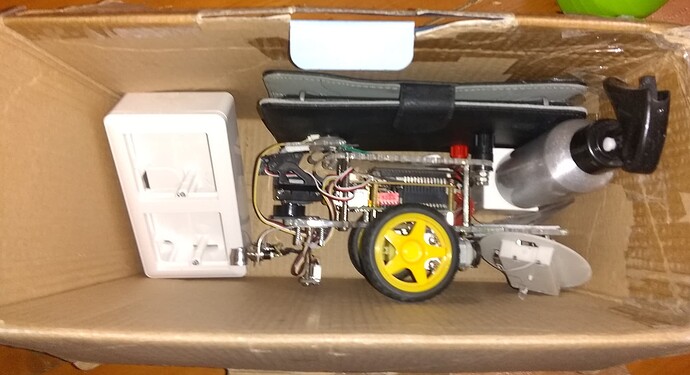 . . . I decided to bring a GiggleBot instead to experiment with.

For those of you who think that the micro:bit is for wimps!, there’s the Adafruit Clue. 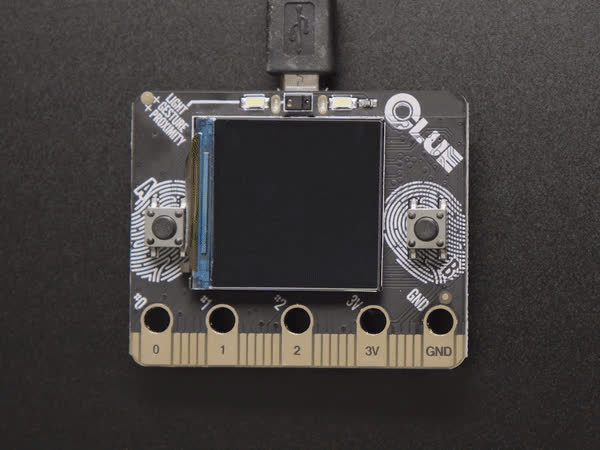 Do you feel like you just don't have a CLUE? Well, we can help with that - get a CLUE here at Adafruit by picking up this sensor-packed development board. We wanted to build some projects that have a small screen and a lot of sensors. To make it... 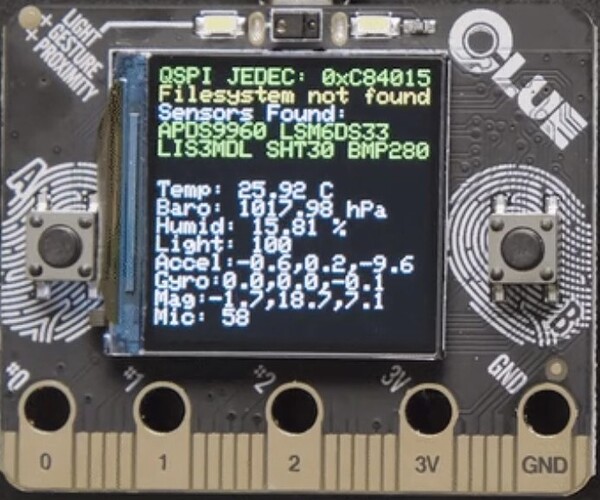 (This is the base startup if nothing else is loaded - it shows that everything is working.) 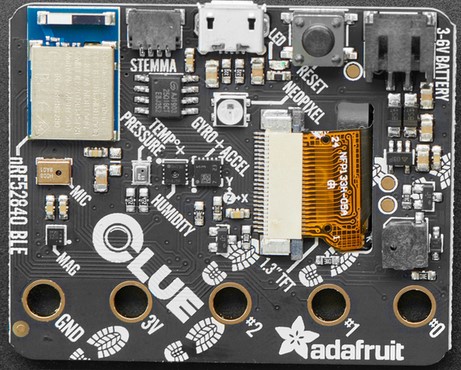 The back side of the Clue shows that it has a whole S-load of sensors built in, along with the mic and speaker that have just recently made it to the micro:bit-2, and it includes a Big Boy’s Bluetooth LE board along with the nice TFT display on the front.

According to the spec’s, it programs using either Circuit Python or the Arduino IDE.

Though it’s not software compatible with the micro:bit, it is pinout compatible so you can plug it into any micro:bit 'bot or expansion board and - so long as you get the software right, (?!!), it should work.

Another cool thing I forgot to mention:
The power connector goes through some power-processing circuitry so you don’t have to worry if your power supply is EXACTLY 3v - you can run the CLUE as high as six volts with no problemos at all.

Me?  I’m waiting to try it in the GiggleBot I brought!

Don’t touch that dial, there are more details to follow!

a whole S-load of sensors built in, along with the mic and speaker

And it has an IMU built-in…

Update: there is not a micro-ROS for it, but it certainly is no lightweight.

It can run CircuitPython as well, which I like.
/K

It can run CircuitPython as well, which I like.

Should I call the GiggleBot Charlene?  (Charlie’s little sister?)

MakeCode is typically accessed at https://makecode.microbit.org/ where create, modify, and run your projects while you’re online. You can can use MakeCode when you’re offline too. Here are some ways you can work with MakeCode offline:

If I read this correctly, I can code the micro:bit using Visual Studio Code too.

I can code the micro:bit using Visual Studio Code too

Should I call the GiggleBot Charlene? (Charlie’s little sister?)

I want to stay away from “Carl” or any of its derivatives. . .

If you want to download the make:code software for offline use - Win and Mac - here’s the link:

The GiggleBot repositories are still being maintained!

Nicole is hot on things, updating the GiggleBot’s make:code repository to include the micro:bit-2!

Charlene is also a French name, (depending on how you spell it. 'eh @cleoqc?), and since she’s so big on the GiggleBot, that’s probably the best choice.

“Russian” names that begin with “C”?  In Russian, “C” is the letter “S” in the Latin alphabet, so they’d be names like Sergei, Slavic, Svetlana, etc.

since she’s so big on the GiggleBot

not a “Charles” variant, but “Cleo” would be an homage

Interesting, and an excellent point!

I might name the other GoPiGo 'bot that if I decide to build it.

(But then, I might have to rename Charlie to “Anthony”

Actually, giving the other bot a female name might be interesting. . .

According to this Micro:Mag article, (from way back), you can, (supposedly), program the micro:bit using editors like mu in straight-up Python.  If that’s the case, there should be Python libraries for the GiggleBot that can be “included” where needed.

Assuming that the Clue can/does use a similar version of Python, it might be possible to include the GiggleBot libraries and use the Clue directly!  Likewise, by dropping into Python and coding directly on the device, there’s the possibility of making that beastie do handsprings that the folks at DI/MR never even imagined.

According to this Micro:Mag article, (from way back), you can, (supposedly), program the micro:bit using editors like mu in straight-up Python. If that’s the case, there should be Python libraries for the GiggleBot that can be “included” where needed.

I received some information from Nicole leading to some software and API pages for the GiggleBot, (which I will share presently), which disclosed certain things:

There is still more research to be done and I will report additional findings as they occur.

They also exist as separate library files so I should be able to load micro-python on the Clue, import the relevant libraries, and get the Clue to work on the GiggleBot.

It does need a special firmware, as there used to be ram limitations on the first microbit. We may be fine now with the microbit V2, but V1 is way more limited.

Progress is being made!

I have cloned both the GiggleBot and the pxt-giggle (the extension for Make Code), repositories.

I have also downloaded the “off-line” version of the MakeCode editor for the micro:bit. This way I can research changes to the GiggleBot extension(s) without mucking up things.

I have contributed one pull request, (correcting spelling and grammar), and have three issues outstanding.

In progress is localization of the GiggleBot’s MakeCode extension into Russian to complement the existing English and French localizations. Major contributors are Masha and Julie, (the granddaughters), who will be given credit in the commit, of course!

I am also going to research the “missing block” issue, try to solve it, and (if I do), submit another pull request. Nicole published an article in Micro:Mag, Issue-2, on how to create your own blocks. I am going to use that as a primary resource to figure out how block-code works.

I have also requested commit authority so that I can work on things w/o pestering the folks at DI/MR since it appears that the GiggleBot is waaaaaay down their list of priorities.

We will see what happens.