I have finally gotten around to characterizing the voltage curve for the GoPiGo-3 first generation red board.

The data is as follows:

Steady state current draw was about 0.5 amps using Raspbian for Robots Buster on a Pi-4 with nothing happening.

Anyone who feels like shipping me a bunch of GoPiGo boards, go right ahead and I will add additional data.

Conclusion:
Especially with the new Lithium battery packs, these trip points should be changed, and there should be an option to automagically shut down (with a flashing red LED) when the voltage becomes critically low.

Current measurements are not calibrated and are for comparison only!

At that point, (4.9 volts), the screen went blank, the GoPiGo’s LED began flashing red, and the Raspberry Pi board LED’s began blinking furiously. They ultimately stopped with the green LED flashing a double-blink code and the red LED on solid.

Rapidly spinning the voltage back up resulted in the Raspberry Pi attempting to reboot. I noticed this at 5.50 volts indicated, but I was not monitoring the voltage closely.

Note that I did not allow the Raspberry Pi to reboot as that was not a part of the testing I wanted to do and was therefore out of scope for this test.

I turned off power, reset the voltage to 12.00v indicated, and restarted. Everything was OK.

Current draw was casually monitored during testing to provide a broad-brush indication of the relationship between applied voltage and current consumed.

Indicated current was inversely proportional to voltage, rising to about 0.75 amps at 6.00 volts, then it stabilized at about 0.7 amps until shutdown.

Note that the current readings fluctuated over a range of 0.2 to 0.3 amps, sometimes more. I suspect this is due to the varying load offered by the Raspberry Pi and the GoPiGo board itself.

I did not attempt the quantify the current readings with any degree of precision as the current ranges have not yet been calibrated.

The currently implemented voltage characteristic is correct and suitable for the original NiMH battery pack which was part of the original design.

It is NOT suitable for use with the new Lithium Ion battery pack because the total range of the battery’s useful voltage is much narrower and the GoPiGo will still be indicating “green” when the battery’s voltage is at its critical shut-down value.

Note the section of the GoPiGo schematic shown below: 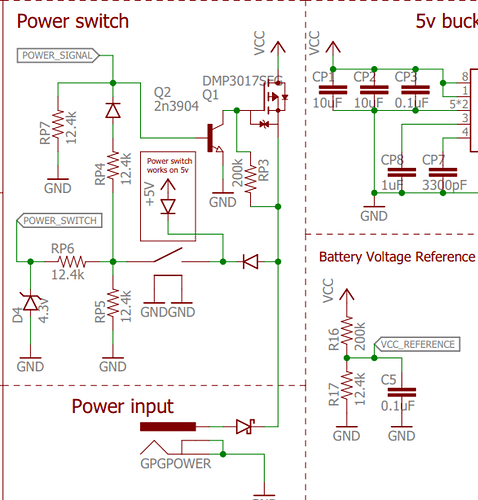 Conclusion:
This resistor divider network should be adjusted to take into account that VCC is always 0.6 volts lower than the voltage across the battery connector and should measure that voltage correctly.

Thanks for this Jim! I’ll bring it to our Products team.

This resistor divider network should be adjusted to take into account that VCC is always 0.6 volts lower than the voltage across the battery connector and should measure that voltage correctly.

On second thought, perhaps the method for measuring the battery voltage can be modified to add a constant 0.6v offset?

I/we will have to look at the battery voltage method and research this as it would be much simpler than a PCB component change.

Actually, (at least by gross visual inspection), it seems the power draw is reasonably constant across the full range of input voltages.

I wonder if the Pi-3 family has a similarly constant power characteristic across its usable voltage range too?

I wonder if the Pi-3 family has a similarly constant power characteristic across its usable voltage range too?

Yes, the amperage draw fluctuates exactly as you saw but the wattage average is constant for any given processor load.