You can't get there from here! Dexter OS cannot reach important resources

Issue:
When trying to navigate and use JupyterLab, certain reference materials are resources that cannot be reached while within the Dexter O/S.

Note that the document cannot be reached. In the case of a “.io” domain, I don’t know if this is supposed to be an external reference, or an internal reference that doesn’t exist or is in the wrong place.

From the “GoPiGo Central Control” page, trying to read something else about learning python lead to a new browser window that launched the same thing. 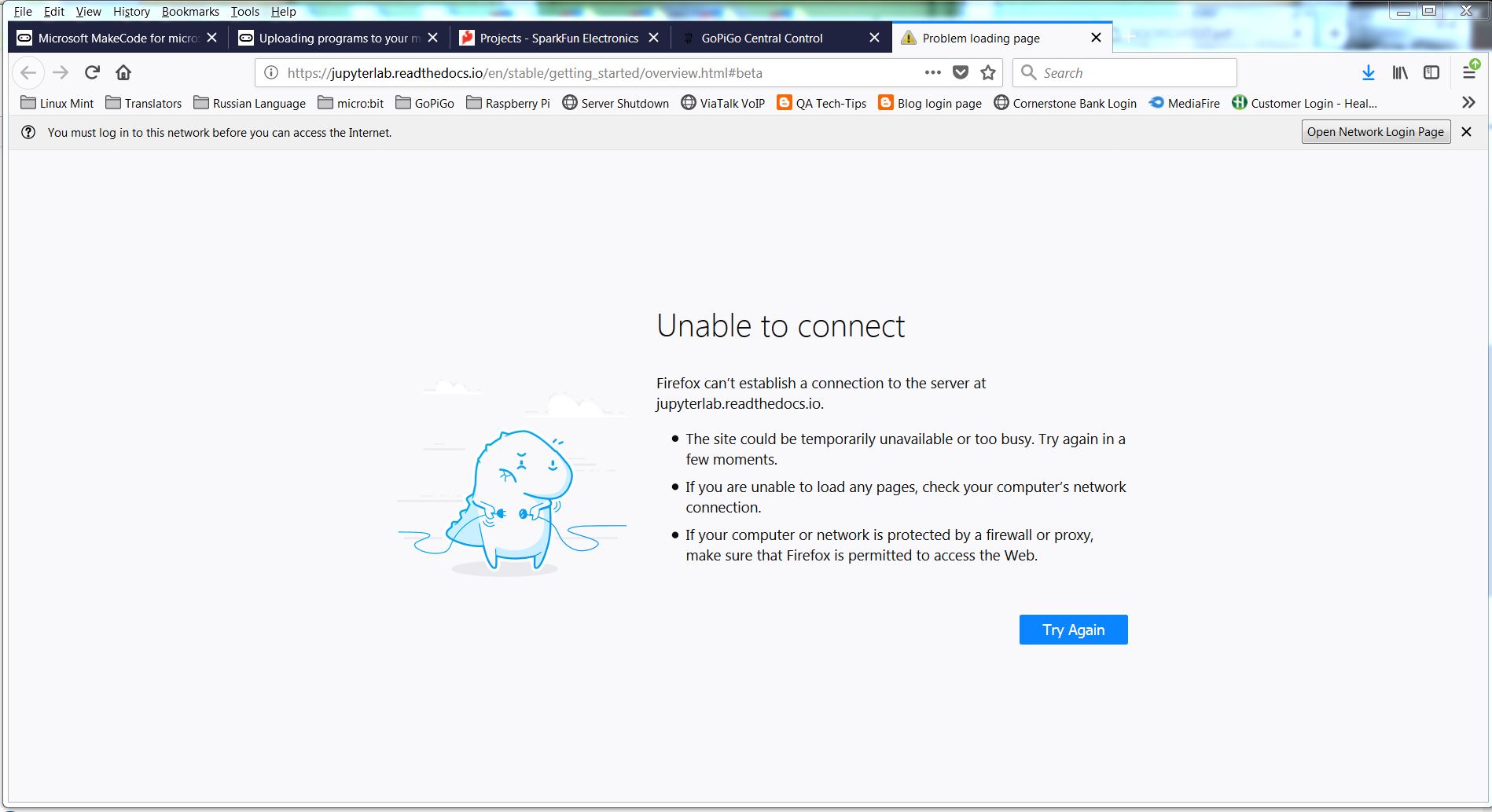 There are a few others like this when trying to use JupyterLab that I will add here when I find them. Unfortunately, I don't often go to the Python coding pages because they are so difficult to use.

When connected to a robot running DexterOS, your Wi-Fi is connected to the robot and the Internet is not accessible.

You could use Wi-Fi to the robot and hard-wire to the Internet to have access to both.

That’s not the point.

If this device was primarily intended for a university or advanced high-school curricula, (and shipped with Raspbian for Robots as the default O/S), I would be in total agreement with you. In fact, this issue wouldn’t even arise as the Raspbian for Robots environment is specifically intended for the more advanced, (or adventurous!), user and has the capabilities to do a lot of things that DexterOS can’t even imagine in its nightmares!

Additionally, configuring an internet connection that has two different bindings with two different networks is not always a trivial task, depending on your experience and the operating system you’re using. It might be simple for you and I, but I’ll guarantee that the typical run-of-the-mill computer user - even if interested in programming and robotics - may not find it that easy a task.

DexterOS, and the whole Bloxter/JupyterLab thing is about making things easy for the first-time robotics user. Or the person trying to teach relatively difficult programming concepts to rank beginners, using a cute but capable robot like the GoPiGo, to give the dry theory some substance in reality. (And add a touch of fun at the same time.)

It is important for us to remember that the DexterOS environment is designed for someone who:

Within this particular context - DexterOS. Bloxter and Jupyter - this is the kind of thing that needs to be reported by the user community and addressed by the relevant parties at Dexter.

No argument from me. However, the only simple fix I can come up with for Dexter Industries is to remove these links from the interface so that you are not even aware of the availability. They could possibly add them to the documentation somewhere.

While it is possible for them to open up DexterOS so that you could easily connect it to the local Wi-Fi network / Internet, that could lead inexperienced users to a state where the robot is no longer accessible and their support team would have a significant challenge helping to fix this.

Example1: Teacher gets the robot working at the Jr High, takes them to the Elementary school for a demonstration and they don’t work. Returning to the Jr High they would be fine again.

Example2: Wi-Fi password in the Jr. High is changed. The entire fleet of robots is now inaccessible and no one can get on to fix them.

I’m sure they have debated this at length.

You’re saying exactly what I was saying.

Not only have the folks at Dexter debated this at length, they’ve debated it with ME  at length

while I was trying to come to grips with what the 'bot could and could not do.

There are a few recommendations I’m going to make in another posting, but (spoiler alert!), it primarily involves removing most of the “advanced” JupyterLab features and going back to the old-style Jupyter.  (Or, alternately, upgrading the current Jupyter to do what the old one did.)

Opening up JupyterLab by going into Python, then opening “help”, and then switching to the “classic” notebook style - you see all the resources you wish you had before.  Even the “new” button allows you to open a terminal session and do other useful things without jumping through hoops or burning brown rice.