Here’s another interesting hardware blurb.  And yes, it does link to products off-site. 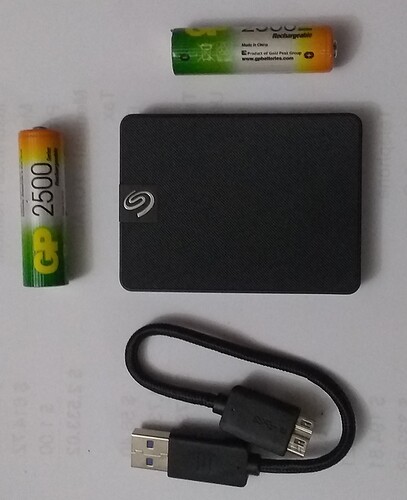 Here is a new drive, (500 gb), compared to a couple of AA batteries.  What you can’t see in these pictures is how thin it is - it’s actually thinner than the AA battery next to it - about 2/3 the thickness. 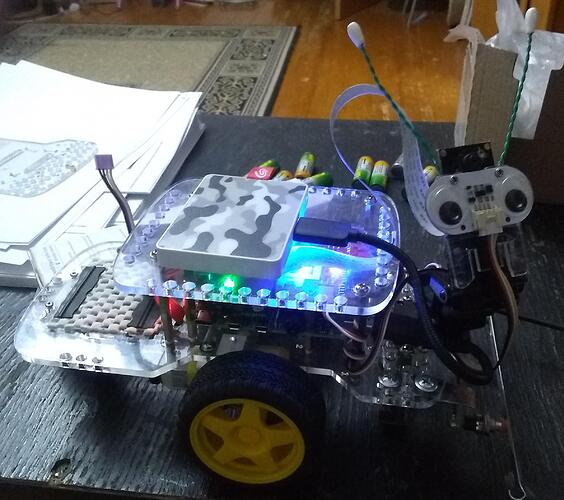 Here is one of these drives mounted on Charlie’s back, that I am using to multi-boot various O/S’s.

Because it’s a true SSD as opposed to a flash drive, it’s very, VERY fast.  Likewise, because it’s an SSD, it draws very little power.

I’m using the ones I have plugged into Charlie’s USB-2 ports because the plug is too big. (I have to fabricate a special version of the USB-3 plug that’s shorter to fit behind Charlie’s pan-and-tilt where the USB-3 ports are.)

Cost wise, it’s about twice the cost of a high-end SanDisk 128 gig App1 or App2 rated micro SD card, (at least when I bought them about a year ago, they might be cheaper now), however that is offset by both the incredible increase in size and the orders, (plural), of magnitude speed increase even when run as a USB-2 device.

I hit Micro Center because I know they’re good.  (P.S. Maybe Modular Robotics should consider selling stuff through them?)

I am sure you can hit Amazon and a half-dozen other places and get similar pricing in the U.S.  Other countries?  You’ll have to do your own research.

In any event, it’s fast, relatively inexpensive, holds a lot of stuff, and it’s both small and light enough to seriously consider adding to a 'bot.

Very nice. I’ll have to go back and look at your old threads, but to be sure I’m clear - the Pi still boots off of the flash card, but you have some sort of minimal bootloader there that redirects to the SSD to finish booting. And it’s that minimal bootloader that’s reading the switches to let you pick which OS to boot. I don’t have a good sense for how much ongoing i/o goes on with the RPi, so I don’t have a good feel for how much impact the SSD would have in terms of performance after the initial boot (of course a faster boot-up would be worth a fair bit).
/K

The Pi-3 and Pi-4 can boot directly from the USB device.

I’m using the ones I have plugged into Charlie’s USB-2 ports because the plug is too big. (I have to fabricate a special version of the USB-3 plug that’s shorter to fit behind Charlie’s pan-and-tilt where the USB-3 ports are.)

One of the open source community’s maxims is “scratch(ing) the itch”. If you have a need and it doesn’t exist yet, (or what exists doesn’t work for you), make your own! Both @KeithW and @cyclicalobsessive have typified this working to get ROS working on their respective GoPiGo 'bots. Me? I needed a right-angle USB-3 connector for Charlie so that I can plug his SSD into a USB-3 connector on my Pi. The problem is that the pan-and-tilt sits in front of the USB-3 ports and a standard connector …