I have been working with the Grove Pi for only some days, but have worked with the RPi for about a year and have done a few projects.
I really like the Grove Pi as I can do things better and faster.

So what I conclude from this is that maybe the data from the soundsensor is applied to the lightsensor. Either in code, firmware or hardware.

This is my code:

I have checked it several times, but I cant find the fault in the code itself. Can you find fault?

UPDATE:
I have tested a bit more and I get data from the sound sensor, even when its not connected.

If I disable code for the temperature and humidity, then it works for the light sensor…its really strange!
I made a separate script to test the light sensor and that works…

Any points to errors on my code?

If I collect the data for light and sound before I collect humidity and temperature, the light data looks correct, but sound still looks strange.

Also the sound sensor data does not look correct. It builds up over time in a steady environment.

I will make a separate script to test it on its own.

We are working on fixing the bugs with the GrovePi - we sort of already have planned this “maintenance” update of the GrovePi. As soon as we have something for it, we’ll make a post about it and let everyone know.

What we also know is that when a subset of different sensors get combined on the GrovePi, the polling functions either return unjustifiable data or they mix the values between themselves.

Do you have a bug list available, because I have a great deal of sensors hooked up. F.ex. I get what I would categorize as “false-positives” on the dust sensor: 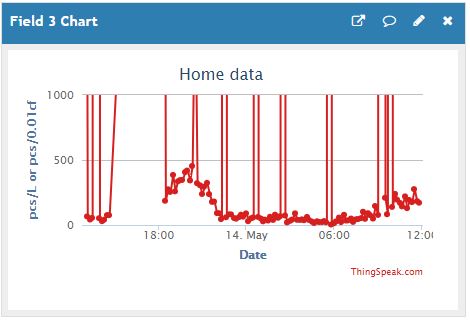 Those peaks, cant be true in a rather steady environment.

Any comments on those?

And this is the sound sensor output…in a room where there is talking during the day, TV and loud parrot noise at times… 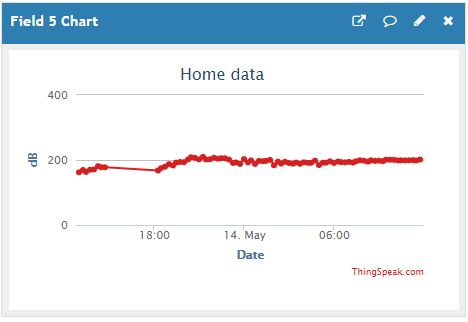 Is it a faulty sensor?

A quick fix for the dust sensor would be to use some very simple statistical filtering. Here’s how I did it with a DHT sensor a while ago:

No, at the moment we do not have a list with all the bugs. Most of them have already been reported on the forum, so we have first got to check those and then move on the other things.

As for the sound sensor, I’m not following what is the issue, except that the measured loudness is way too high.

Thanks for the help with code to remove those false readings - very helpfull!

The problem with the sound readings is that they dont change to reflect change in noise. There is not difference between the sensor being in a noisy environment of completely still.

Hmm regarding the sound sensor I think that’s because the GrovePi is not fast enough for picking up sound. Maybe you can test it by brushing your finger directly onto the microphone and see if that reports a higher value when calling it.

I know we have used it, but it wouldn’t pick everything and because of this, we moved onto using the Grove Loudness Sensor.

You can find a more detailed explanation here:

Hi All - I’m working on a project in which I have to listen to repetitious sounds that follow a similar pattern, unless there is something wrong. The receiver needs to be able to listen to metallic clinks and report back if there is an abnormal pattern. The typical speed of movement is around 2000-7000 RPM, so the sensor would have to work rather quickly. Right now I’m looking at the electret microphone connected to a GrovePi to accomplish this: I’m curious if anyone has used this sensor…