hello,
I can’t find the specs of the brickPi3 H-bridges - where can I find them (voltage and current ranges for 1-4 attached motors)?

@Dexter:
can you please link to the specs of the brickPi3 H-bridges ? (esp. output current range in relation to voltage supply, for continuous motor load and for short-time peak load)

Here’s the datasheet for the TB6612FNG:

Now my crucial question:
what exactly will happen if one applies 12V Vc and attaches 4 DC motors each by 5A stall current, if the 5A are flowing permanently?
Is there a fuse shutting off the entire BrickPi? or just either H-Bridge output? Or will one observe magic smoke then?

You can’t draw 5A from the motor ports continuously (or even peak). Look at the datasheet; 1.2A continuous (average), 3.2A peak (startup/stall). The motor drivers have a built-in thermal shutdown circuit, so overloading them shouldn’t be dangerous or cause permanent damage, but I would advise against using any motors that exceed the rated current specs for the drivers.

thank you for clarification. I saw that there is a 3.2 A limt to the H-bridges but I was afraid that stronger motors with 5A start/stall current might damage the entire shield then (actually the motors are the original Pitsco Tetrix DC MAX motors), so it’s good to know that there is an internal thermal fuse then to prevent the worst.
Lego motors are far too weak for my purposes, even for intermediate mechanical load, but I will use 3A current delimiters then in between (perhaps kind of PTC).

ahm… wait…:
hopefully the output current limit of 3.2A is for each single one of the all over 4 motor channels (so finally 4x 3.2A short time peak)… ??

All the information you need can be found in the PDF that I’ve provided.

Here’s a screenshot on the absolute maximum ratings I took in the datasheet:

As you can see:

And here are the target characteristics that I’ve taken out the datasheet. 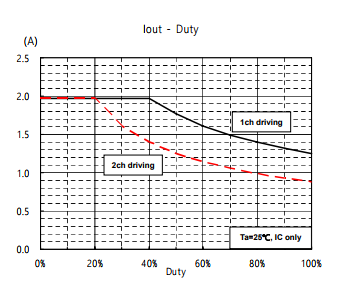 You can easily deduct that:

These 2 deductions are valid when you are planning to go with the duty cycle up to 100%.

Everything is in the datasheet.

(edited)
thank you, I did not understand that 1ch means 1 channell each.
Nonetheless, I don’t understand everything what you wrote, my English is too poor, and I also do not undestand the duty chart - I am no technician, no electrician, and no computer scientist (actually I am a physician and a pharmacist, meanwhile retired

Simple question:
do I have 4x 3.2A short time peak current? yes or no?

Wow that must be a big robot motor at 5A. My nema34 stepper motors on my CNC mill max out at 4.8A.

no, that would not work IMO, because H-Bridges need seperate (3v3-5V) input pin signals for enable=pwm, dir1, optionally (by design) dir2, plus constant GND and Vc (also 3v3-5V), and not a 12V compound motor signal of modulated pwm by different arbitrary polarity as an input. In fact there might be some rough workarounds (not providing coast and brake control though), and actually I already have different ones of those H-Bridge Boards here at home (up to 20A 36V), but that is not my question.
My question now is:

@Dexter:
do I have at 1 Brickpi3 shield motor ports all over
4x 3.2A short time peak current?
yes or no?

If you need more power, you could use additional BrickPi3s to run additional Lego motors.

If you must use Tetrix motors, you should look for an alternative controller for them. Looking at the Arduino drivers for the TETRIX MAX DC Motor Expansion Controller, it looks like it’s an I2C device, which means you could probably control it from a BrickPi3 (connected to a sensor port, or even to the Grove I2C port).

hi matt,
thank you, I understand your point.
Nonetheless, I am curious about the actual limitations for peak current of the BrickPi3 motor ports, so do they provide short time peak current of 4x 3.2A or just 2x 3.2A or perhaps 4x 1.6A max ?

so what is the ultimate answer to BrickPi3, the max 4x motor port current, and everything?

For the actual limit where the drivers will overheat and shut down, I suppose it depends on a lot of factors. Supply voltage, ambient temperatures, load on the 5v rail (which creates some heat), etc.

With all the testing I did with Lego motors, I don’t think there’s any risk of causing damage to the BrickPi3 due to running/overloading/stalling Lego Mindstorms motors.

You could start with small currents and then gradually increase the current until the driver chip gets too hot to touch.
Sometimes, experiment beat theory and you just need to follow this way.

that is actually not the answer which I have expected.
Please give me an exact answer:

do I have at the Brickpi3 shield motor ports all over
4x 3.2A short time peak current?
yes or no?

I actually do not understand.
There are 2 built-in industrially designed H-Bridges (by Toshiba) , and there are technical specs about it - I just can’t read the data sheets as they are too weird and ambiguous to me.
But as RobertLucian stated, “Everything is in the datasheet.”

So what do the TB6612FNG specs say exactly about the max current at 4 ports simultaneously at 100% pwm?

For 4 ports (2 channels on each of the 2 drivers) simultaneously at 100% pwm, the datasheet says 0.9A per channel at 25℃ ambient temperature. You can look at the chart on page 6 of the datasheet for the maximum current for 1 and 2 channels at different PWM duty cycles. For reference, motor ports MA and MB share a motor driver (each uses 1 channel), and MC and MD share a motor driver (each uses 1 channel).

To summarize, the BrickPi3 is designed to run Lego Minstorms motors, and I advise against using it with other motors.