Target directories for GoPiGo control panel are owned by "root"

Testing by exhaustion, (setting “print” statements everywhere), I determined that the issue was with the save_robot_constants method in easygopigo3.py

I did a file search for “easygopygo3” and found this file in three different places. All of these files reference a configuration file in /home/pi/Dexter - gpg_config3.json - which does not exist.

Attempting to create it within the GoPiGo noVNC window, (running Geany), it failed with a “permissions” error, because the “Dexter” folder and subdirectories are owned by “root” and the pi user only has read and execute permissions to that folder. Ergo the control panel doesn’t have permission to save files - and fails silently.

I solved this problem with a recursive “chown” over the Dexter directory, changing the ownership to pi:pi. (I left the di_updates directory structure alone.)

I also ran a recursive “chmod” over the same structure, changing the permissions to “755” because I had “tweaked” the permissions of some files to “777” while troubleshooting.

It seems like they expect us to fill in the file path we desire - since the defaults cannot work for us:

so it seems the declaration in our code should look like:

I haven’t tried it, but it would seem that is the way it should work.

what permission and ownership should I restore to which directories?

“Da Bitch part” as they say in Blazing Saddles, is that the source “easygopigo.py” file - whichever one is being used - is not writable by the “pi” user, so there is no direct way for us to change it, aside from gaining root access and changing these files by hand.

IMHO, this goes WAAAAAY beyond ugly, since the user interface, as supplied, should work. If there are dependencies or requirements, they should be a part of the initial configuration.

the source “easygopigo.py” file - whichever one is being used - is not writable

If you absolutely have to get your fingers dirty, use the inheritance by subclassing:

and overload as needed.

Oh yeah - that issue. I think we need to find that control panel in the DI github and put an issue against it.

but you could also try writing to support@modrobotics.com to see what they say.

In my case, everything in “/home/pi” was owned by “pi” except for “Dexter” and “di_updates” which were owned by root.

I don’t know why there is, (was), this difference. Maybe I did something different? Maybe because I ran Dexter OS prior to Raspbian for Robots? Maybe you chowned everything a while ago?

My version of /home/pi/Dexter/GoPiGo3/Software/Python/Examples/Control_Panel/control_panel_gui_3.py did not have the calibration stuff in it so I downloaded the latest:

Then I ran the new version, set my parameters in the boxes, clicked “Save and Exit” 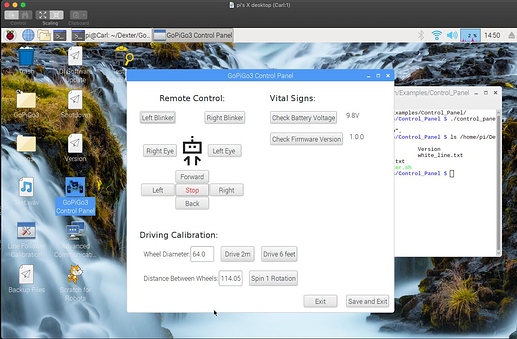 and the file /home/pi/Dexter/gpg3_config.json was written and gets used.

So perhaps it is working as designed?

As Mr. T used to say in The “A” Team:
I pity the fool, PITY the fool - that effs around with system include files!

The only time you should be messing with system supplied includes like this, is if you find a problem that can’t be solved any other way, you document the changes, and create a “pull” request against the master GitHub repository. Though, I admit that this problem could be solved by changing the target of the save file to “/home/pi” which is writable by the user “pi” with no other changes required. (Two changes needed, config load and config save)

In your case, /home/pi/Dexter is owned and writable by “pi”, so you have no problems.

Once I made that change to my Dexter directory, everything works wonderfully.

That is the problem. In what I believe was a “virgin” installation of RFR “Buster”, this directory was owned by “root”, not “pi”. Ergo, no joy.

Maybe you chowned everything a while ago?

Entirely possible - I was chasing down this exact issue last year some time and may have done that. I ended up giving up because all my existing code imports a myconfig.setParameters() that has my wheel base and dia as constants.

BTW:
While I was chasing this down, I decided to play with the control panel dialog. 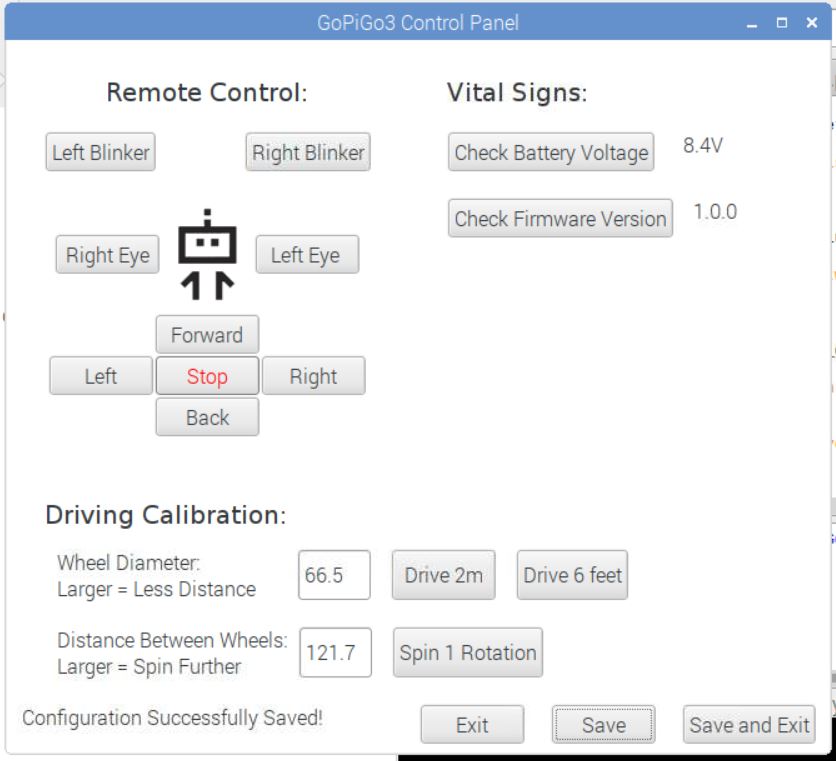 Let’s see what Dexter/Modular Robotics thinks of this.

so it seems the declaration in our code should look like:

I haven’t tried it, but it would seem that is the way it should work.

What’s with the mutexes? Are you and/or does the native Raspbian for Robots run that much multi-threaded code?

Are you and/or does the native Raspbian for Robots run that much multi-threaded code?

I run multiple python programs that all use the EasyGoPiGo3 class with mutexes. The main one is the battery level monitor that also docks and undocks (needs the distance sensor). The RPI-monitor runs several data access instances every 30 seconds, and the I am usually running some test or developing a new feature like IMU or OpenCV instance, so the mutex keeps everyone playing nice to the I2C sensors. I also have a data store that is protected by a DI custom “named” mutex. That one is not the use_mutex=true semaphore though. Both are platform / global muxexes.

Save” button between “Exit” and “Save and Exit”

I thought of that but decided not to get too crazy.

Save” button between “Exit” and “Save and Exit”

I like the idea of both a “save” and “save/exit” button. Otherwise I’d need to have a “dirty flag” that would bring up an “unsaved changes” dialog - and so far, pop-up modal dialogs have frustrated me.

Maybe I should add modal dialogs to my “Stretch Goals” list?

It’s automatic when you create the instance. If the file exists, it supposedly uses it. Check it some time:

If those two files are owned by root on the Buster experimental image, then it’s a booboo on my part. They should be owned by pi and be writeable from the GUI.
Thanks for reporting it, I’ll add it to our test plans (why wasn’t it there in the first place, I don’t know)

Perhaps you mistakenly tested as “root” instead of “pi”?

I think I’m using Buster. I’ll have to make sure. Even if I’m on the “stable” version and not Buster, shouldn’t this mandate an update?

I’ll add it to our test plans (why wasn’t it there in the first place, I don’t know)

Because we’re all human, that’s why. Been there, done that, bought the T-shirt.

Don’t sweat it, you got us watchin’ your back!

(It’s the least I can do to help repay what you and your colleagues have done for me. I am still floored by the “new user of the month” award - wow!)

What do you think of my “enhancements” to the control panel?

BTW, is there a way to capture the actual button selected within onSave? I’d rather do that than write an entirely separate method that does 99% of what onSave is already doing.

Just had a thought: