Viz.: Your original posting at:

The documentation and software for GoPiGo3 is built around the following: Wheels are “nominally” 66.5 mm Motors have a 1:120 gear reduction ratio The magnetic encoders are “incremental” type (can tell direction of rotation but not absolute position) The encoders output 6 counts per motor shaft revolution Both the GoPiGo3 and EasyGoPiGo3 APIs read the encoder hardware in encoder counts All GoPiGo3 and EasyGoPiGo3 APIs communicate in whole integer degrees (2 encoder counts) For drive_inches() i…

After reading your treatise above, I decided to “take a whack” at getting some kind of reasonable calibration for Charlie.

My “test track” is an uneven wooden floor in my living room. Since the GoPiGo wheels are sufficiently “soft” and “sticky”, (get decent traction), I figured a wooden floor would be best.

Unlike Carl, my battery pack is in the back as I have other ideas for the top - like displays or other sensors, etc. I am also still using the “stock” metal ball since I didn’t have a chance to get the nice plastic one like you have.

Results:
I’m not going to try to “map the world” with Charlie’s current calibration, but it should dramatically reduce the error in line, and especially the angular error, that I’ve been seeing with Charlie.

I didn’t try for anything better than 0.1 increment accuracy since there are still too many things working against me

Stretch Goal:
Find a way to incorporate these updated calibration constants into DexterOS so that my, and my granddaughters, blockly programs make reasonably accurate turns.

Any ideas on how to improve this?

Target directories for GoPiGo control panel are owned by "root"
Does Raspbian for Robots/DexterOS actually USE the calibration data?
cyclicalobsessive January 12, 2020, 11:19pm #2

Any ideas on how to improve this?

Charlie needs a dedicated play pen with a flat floor and movable walls.

Yea, and I need a kick-tush floor planer, (and jet-engine-repair ear protection!), to smooth out a place for him. Since we just spent several teens of thousands of USD to install “street gas” into our house, install radiators, and get a nice wall-mount gas “boiler” to heat this place, (and, damn it all, we’re having one of the warmest winters on record!), I don’t think that will happen any time soon.

Then again, maybe I can make a project out of this with the girls, take it to their apartment with the nice smooth floors, and try to calibrate Charlie there.

Question:
How do you:

Stretch Goal:
Find a way to incorporate these updated calibration constants into DexterOS so that my granddaughters, (and my own!), blockly programs make reasonably accurate turns.

I found this laying around - about some kids and a bunch of GoPiGo’s in a classroom having a hoot of a time. Of course, Cleoqc, was The Man of The Hour as far as calibration goes.

What to do with 25 new GoPiGo3's with 6th graders

About those 90 degree turns, there are a couple of options.

Wizard! I’m going to take my calibration constants and try them in Dexter.

Cleoqc also mentioned checking wheel alignment - both parallel to each other and properly aligned with respect to the chassis. Blast it all! I forgot all about that!

Update:
Apparently I didn’t forget. Just to be sure, I re-measured alignment from several different points on each wheel, and they’re dead-on. Just the kind of stuff I get totally OCD about.

to smooth out a place for him

Perhaps four sheets of tag board taped together on the bottom so it will fold up when not in use?

A piece of 4x8 Marlite would be even better. (Marlite - the stuff that looks like really thick cardboard with a smooth plastic finish that’s used for walls.) All I have to do is:
(a) Find it
= = = and = = =
(b) Figure out how to get it home using the Russian equivalent of a Hyundai Accent. (It’s called a Solaris over here - they had to upgrade the suspension and increase the ground-clearance!)

Question:
How do you:

I didn’t bother with exactly straight.

For the distance (wheel_dia) I actually drove him across the lines/boards.

Each board is exactly 3 inches, so I used the very back of the caster against a “first floor board” line,
drove 27", and adjusted wheel_dia till the caster ended closest to the far edge of the 9th board. 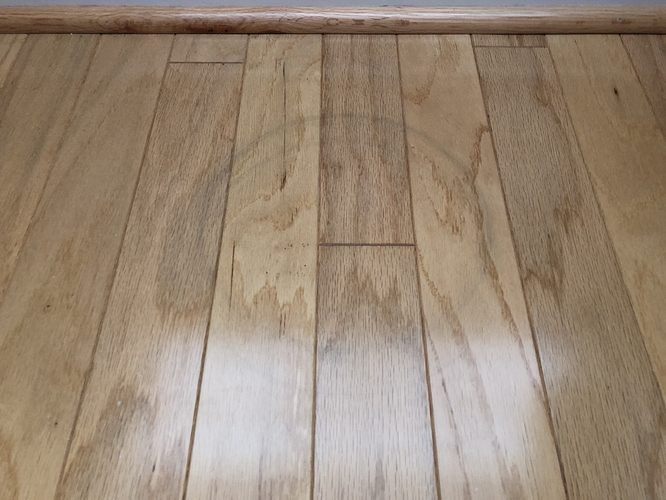 I just put my eye above the castor and guessed where vertical was. Close enough.

I tried various speeds and found 150 to be “the straightest” and “the most consistent”.

Some start up slip and stopping skid is unavoidable, but there is a speed that will minimize both. (Advanced driving techniques ramp up the speed to avoid slipping, and ramp down to avoid skids.) I also cleaned the dust off the floor to maximize wheel grip and avoid slippage.

BTW, you can see how I picked a center point and starting line for the wheel_base calibration turns.

My calibration routines are in Carl’s git - I was able to adjust the wheel_dia or wheel_base value, line Carl up, then hit return to execute the run, (forward distance, then backed distance), or enter x4 to do fwd-back four times or two times or 10 times to test repeatability when I thought I had a good value.

I put the values in a module and run myconfig.setParameters(egpg) before the load/save_robot_constants() methods were available, and still use my module.

AND putting the battery in the center was the key to repeatable turns. The lower friction of the castor on the floor imperfections made a big, big difference - (that’s the wheel_base_width value calibration secret).

smooth is good, too smooth is not.

Though I am having trouble getting the GoPiGo control panel to “save” my work - clicking on “save and exit” does nothing and “exit” simply throws away what I have done.

Figure out how to get it home

Really, heavy tag board can just roll up.

Another Idea is the plastic/rubbery pattern cutting sheet that seamstresses use. It has a non-skid surface and rolls up - even comes with lines and ruled markings.

I found large sheets of rather slick, white, Marlite-like wallboard. My concern is that it might be too slippery. There were sheets of a creamier color with a very slight stipple pattern - just enough to give a matte finish. My concern with that is that it’s more beige than white - and I hoped to use it for line-following. A smidge less than $48 with delivery if I get two sheets of the white stuff.

Really, heavy tag board can just roll up.

Another Idea is the plastic/rubbery pattern cutting sheet that seamstresses use. It has a non-skid surface and rolls up - even comes with lines and ruled markings.

Thew big problem with “roll-up” stuff is that it tends to not lay flat when you un-roll it - unless you let it sit for a day or two. My idea is something that I can fold in half, put out of the way, and then bring it out when the girls want to play.