Here is an interesting article on enabling the built-in 64 bit kernel in Raspbian. (which includes R4R and possibly ROS) 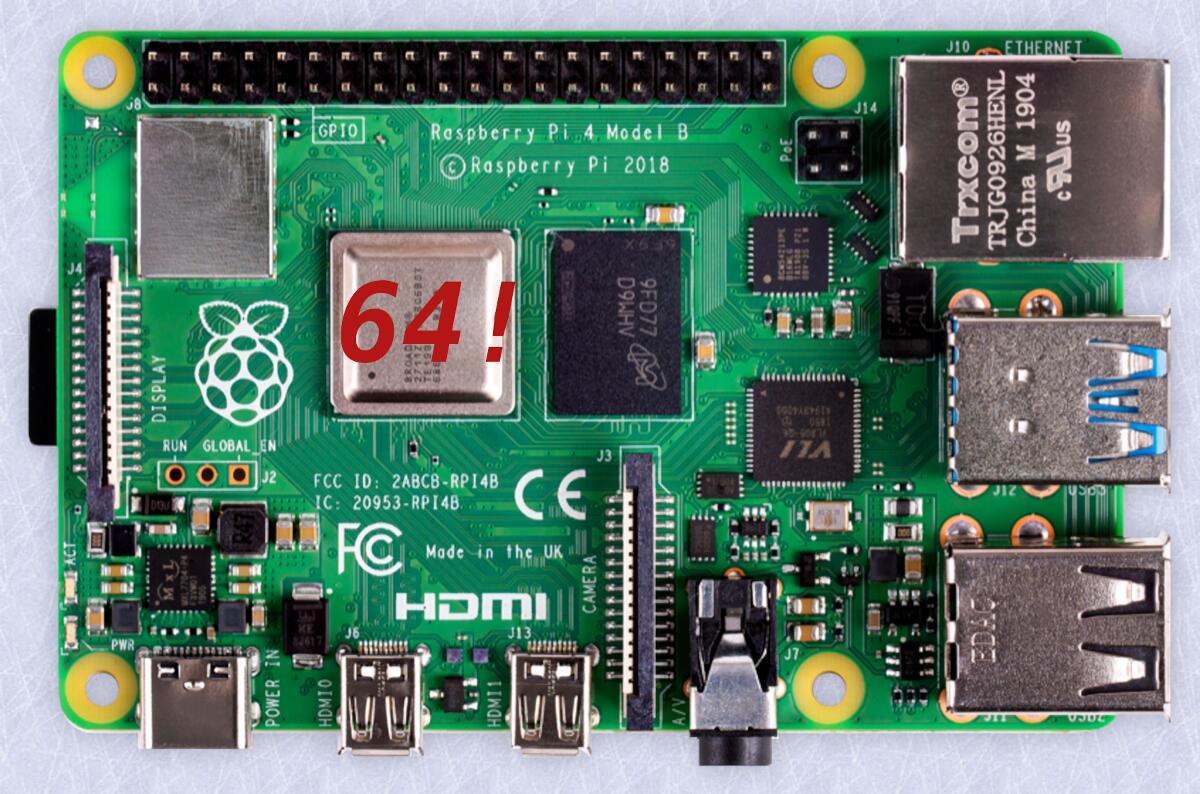 We can make it faster, better…

The instructions, summarized, are:

The “armv7l” is the key that you’re still running a 32 bit kernel.

The “aarch64” is the key that you’re now running the 64 bit kernel.

For Pi-3 users:
If you want to try this with a Pi-3, do everything noted above, except that you put the arm_64bit=1 line somewhere else in the config.txt file.

Give it a try and see how it works.

I am going to try it and see what happens.

I am going to try it and see what happens.

Robots need a stable, reliable OS so that all questionable behaviors come from the owners’ programs.

Is there some deep psychological reason for this experiment in robot sabotage?

But Why?
[. . . .]
Is there some deep psychological reason for this experiment in robot sabotage?

Not to mention that, at least on the last couple of Buster releases, 99% of the changes are unnecessary as they are already baked in.

Just to “clear the air” (and punch the “reset” button), after the last series of experiments, I reverted back to a clean 2019-12-19 Buster release and copied my experimental folders and the few changes - primarily in the crontab file - needed to bring it up to date.

Since it already includes the needed kernel8.img file for 64 bit support, all I had to do was plop the arm_64bit=1 statement into my config.txt and away I go!

So far, (famous last words!), everything has been OK. If anything goes wrong all I have to do is comment out the one line in my config.txt file, reboot, and I’m back to the normal installation.

Side note:
You may wish to try a uname -a on Carl to verify he’s using the armv7l kernel, (i.e. using the kernel7l.img file - a low latency kernel), instead of the generic kernel7.img.

everything has been OK

But is anything improved?

Because most of the “userland” utilities are 32-bit based, there may not be a lot of improvement. Possibly some, but not blazing speed-ups.

However things that are primarily kernel based, (I/O is a good example), will see a significant speedup.

Because this kernel is (supposedly) set to use “hardware” based preemption, it’s less likely that a blocking process will time-starve other, possibly unrelated, processes. Of course, if transactions need to be atomic or protected, it’s good programming practice to make sure by using the appropriate locks and/or semaphores.

This may result in the system being more “snappy” overall since potential time-hogging processes will be forced to yield regularly.

Part of what I am doing here is to compare the userland functionality of both systems.

If nothing else, I am (hopefully) collecting useful data for the people working on the 64 bit version of Raspbian.  If I discover something specific to the 'bot, I am hoping that communicating this to M.R. will help.

One gentleman over at the Raspberry Pi O/S 64 bit forum posted a very interesting “benchmark” over at the Pianoteq form.  Apparently this guy is a music enthusiast and is using his Pi as a recording/synthesizing/rendering tool, (impressive by any standard), and posted a benchmark of performing some music conversion on both 32 and 64 bit kernels.

I’m no music synthesizer expert, but it looked impressive to me.

Rendering, either audio or video, is a processor intensive task not unlike AI/speech recognition.  Perhaps it’s time to give the 64 bit kernel a spin?

P. S.
The entire thread looks impressive from the point of view if trying to squeeze every ounce of performance from each and every processor cycle.

In other words, if you’re doing things that require near real-time performance, this might be the difference between a Pi that’s merely adequate and a Pi that qualifies as a Hot Smokin’ Weapon.

Perhaps it’s time to give the 64 bit kernel a spin?

Still sounds like a bleeding-edge. Not enough blood to spare.

Not as bloody as it sounds. There are still a few quirks, but compared to the releases of a few months ago, it’s ready for release!

I have an installation of Raspberry Pi O/S 64 that I want to try a spin of R4R on.

One experiment I am going to try is installing a 64 bit image, running the special "curl [something or other, I’ll go look it up] command that loads the lion’s share of the environment, and try some of the stuff I’m doing in a 64bit environment with many utilities re-released as 64-bit executables.

I might also try copying over the Dexter and dexter_update directories and desktop and see how that goes.

@cyclicalobsessive, If I come up with a spin that doesn’t fall flat, would you like a copy?

I don’t have an automated regression test suite for Carl, and just changing a line a day is breaking less used functions but not revealing the issues laying in wait until just when I need to be able to trust those functions.

I went over a year before trying any R4R update and then “moved in” to a now withdrawn version. While the move taught me a lot, I can’t point to any operational benefits for Carl. I’m not signing up for another OS test.

I’m always too focused on creating new features, to stop progress in order to build a regression test suite. I would like to have a second GoPiGo3 to try concepts out on, but that would also take time away from working on Carl.

Carl has become so non-deterministic that he needs an independent “Health Monitor” to alert me when some operating parameter starts exceeding “normal” (cpu temp, swap space, cpu load, loss of WiFi, I2C clogged, and the parameter I have not integrated a sensor for yet - current draw.)

Oh, “Carl needs.” He has become so needy!

It happens every once in a while that I step back to assess “What Is Carl?” [2020_Carl_With_Toys] This morning was one of those times. The result is an updated Carl’s Architecture Diagram [Carls_Architecture_2021] (Update: added RPi, sdCard, batteries, docking station)